The Sea at the Center

Robert Kaplan argues in Asia’s Cauldron that control of the South China Sea is going to be critical in the geopolitics of this century.

According to Ian Morris’s NYTBR review, “Kaplan starts out from some basic economics. More than half of the world’s annual merchant fleet tonnage (including four-fifths of all the oil burned in China) passes through the South China Sea. This commerce, Kaplan says, has turned that waterway into ‘the throat of the Western Pacific and Indian Oceans — the mass of connective tissue where global sea routes coalesce,’ investing its straits, shoals and islands with extraordinary strategic significance. At the heart of Kaplan’s book is a striking analogy that aims to explain what this will mean in the 21st century: ‘China’s position vis-à-vis the South China Sea,’ he suggests, ‘is akin to America’s position vis-à-vis the Caribbean Sea in the 19th and early 20th centuries.’”

Kaplan doesn’t envision Chinese conquest of Southeast Sais, but something more akin to Findlandization: “Southeast Asia’s governments ‘will maintain nominal independence but in the end abide by foreign policy rules set by Beijing.’”

April 23, 2014 When Work Is Fun
Browse Our Archives
Related posts from Leithart 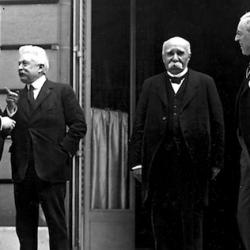