I begin with two fundamental objections to R. Alan Streett’s Subversive Meals, a study of early Christian meal practices in the context of Greco-Roman  banquets and the Roman empire.

First, Streett takes the Roman banquet as the primary context for understanding Christian meal practices. I insist that Judaism and the Hebrew Bible provide the primary context, though acknowledging that Greco-Roman practices are also critical for grasping the full significance of the Supper. This distinction becomes blurry when we recognize that Jewish meal practices were already influenced by Greco-Roman habits (reclining, for instance). But there is still a distinction to be made. I’m skeptical, for instance, that the libation of a Roman banquet is as closely linked to the cup of the Supper as Streett suggests.

Second, Streett approaches early Christian meals from the perspective of an empire critic. Though he is right to emphasize that political setting for Jesus and the apostolic church, he like other empire critics tends to overread the presence of anti-imperial teaching and sentiment in the New Testament. (For balance, see McKnight and Modica, eds., Jesus Is Lord, Caesar Is Not, some of which is summarized here.)

That said, Streett’s book is an important, illuminating, well-researched contribution to our understanding of early Christian meals and early Christianity as a whole. He offers a vivid portrait of a Roman banquet, and draws out the social and political import. He traces the history of the counter-imperial Passover, a meal celebrating liberation from Egypt and anticipating a future, grander liberation. He puts the early church in the context of Roman associations, which were often breeding grounds for resistance. He makes a compelling case that the early Christians celebrated the Supper in the context of a full meal. He rightly stresses that Jesus’ ministry as prophet was inescapably political, and he convincingly shows that the meals of early Christians were training grounds for a counter-imperial community – by emphasizing the need to recline with the marginal and poor, by rejecting the reciprocity and status-seeking of Roman (and Jewish) meals, by proclaiming and commemorating the death of a man crucified by the Romans, by including women and slaves at table, by cultivating a koinonia around the patron, Jesus.

Streett claims that his is the first “scholarly work dealing with the Lord’s Supper as an anti-imperial activity” (3). I don’t find Cavanaugh’s Torture and Eucharist in the bibliography, but Streett’s aims are more historically and biblically oriented than Cavanaugh’s. Streett fills in gap.

Nearly as interesting as the book is the author identification on the back cover, which informs us that Streett holds a chair in preaching at Criswell College. Funky things are going on in the world when a Criswell faculty member writes a cutting-edge book on the Lord’s Supper, much less one emphasizing the political dimensions of the Supper, much less one that draws on James Scott for guidance.

May 17, 2014 Universal Praise
Browse Our Archives
Related posts from Leithart 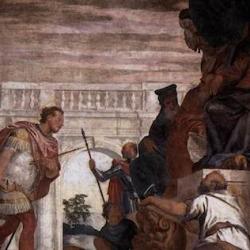 Evangelical
Empire with the Soul of a Church
Leithart