Predestination and the Presence of God

Predestination and the Presence of God January 23, 2015 Peter Leithart

Matthew Levering’s Predestination is, like everything he writes, clear, thorough, judicious, rich, biblically and historically informed. He starts with the church fathers and takes the story to the present worries (from David Hart among others) that predestination endangers the innocence of God.

Levering recognizes the limits of patristic treatments of the topic: “the Church Fathers develop insightful but almost inevitably one-sided approaches to the New Testament’s teachings on predestination. . . . Origen emphasizes the Creator’s unlimited love for each and every rational creature, and he assumes the predestination of all to salvation. Augustine insists that the New Testament teaches God’s utterly gratuitous predestination from eternity of only some rational creatures. John of Damascus highlights the power of created free will to rebel against God’s love, with corresponding limitations as regards God’s eternal providence in bringing about the salvation of rational creatures.” According to Levering, “each of these perspectives responds to certain aspects of the biblical witness while neglecting other important aspects” (8).

Levering gives a careful, dispassionate treatment of Calvin. He highlights Calvin’s rejection of scholastic notions of “permission,” and traces Calvin’s opposition to a concern about distancing God from creation and about raising questions about the goodness of God.

On the first point, Levering writes, “After giving a variety of biblical examples of God willing evil deeds so as to punish the wicked and bring about salvation, Calvin notes that by contrast the doctrine of permission makes God aloof from salvation history. The God construed by the doctrine of permission cannot truly be the active Lord of history. For Calvin, those who rely upon the doctrine of permission depict God ‘as if he sat in a watch-tower waiting for fortuitous events, his judgments meanwhile depending on the will of man.’ This aloof, detached, passive God is not the God of the Bible. The God of the Bible, Calvin observes, acts within the minds of human beings not only to enlighten them, but also to blind them and to intoxicate them. God thereby compels the wicked to serve him” (103).

The second point is counterintuitive, given the widespread impression that Calvin’s doctrine of predestination implies that God is an oppressive ogre. Levering writes, “The danger with the doctrine of permission is that it seems to question the goodness of the omnipotent God’s eternal decree. In observing that predestination means ‘the eternal decree of God, by which he determined within himself whatever he wished to happen with regard to every man,’ Calvin puts his finger on the difficulty: God’s permission of everlasting rebellion cannot be disjoined from God’s eternal will. God fully knows and freely wills this order, which includes everlasting rebellion. Since God is free and all-powerful, he is not constrained to create this kind of order. God wills an order in which some are left out from union with God, and so this must be a good order, one that does not need the covering of the doctrine of permission. Calvin senses that the doctrine of permission originates in doubts about the justice of reprobation ‘by the just but inscrutable judgment of God, to show forth his glory by their condemnation.’ Discussing Paul’s interpretation of Malachi 1:2–3 (see Rom. 9:13), Calvin urges that the doctrine of double predestination in fact elucidates the scriptural doctrine of undeserved grace, God’s bounty rather than harshness” (106).

The notion of permission is a way of opening a gap between the ultimate outcome of history and God Himself, the Lord of history. Calvin on the contrary insists on the goodness of God’s plan,which is a plan that includes hell.

January 26, 2015 Rape and Consolatio
Browse Our Archives
get the latest from
Evangelical
Sign up for our newsletter
POPULAR AT PATHEOS Evangelical
1

Evangelical
The God who Predestines
Leithart 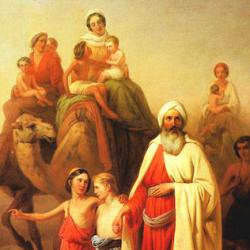