Many modern theologians have argued that sacrifice is no longer a meaningful category with which to discuss the atonement. Frances Young (Sacrifice and the Death of Christ) begs to differ, and lays out a fine summary of the advantages of sacrificial accounts: “For the early church, sacrifice was an image which could focus with peculiar intensity the full significance of the life and death of Christ for the salvation of the world” (90).

Sacrifice was able to encompass the notion that Christ’s death was “an act performed by God to avert the devil” and “an offering made to God to appease his wrath.” Young believes these two accounts to be inconsistent (I disagree), but she sees both in the early church, and the category of “sacrifice” was broad enough to include both (91).

For Athanasius, sSacrifice explained how the death of Christ “salvaged” God’s integrity, resolving the dilemma between following through on His threat to punish sin and exhibiting His goodness in keeping creation together: “the sacrifice of Christ was the solution to this dilemma; it was a sort of ‘self-propitiation’ offered by God to God to make atonement for the existence of evil in his universe. It took the form of paying the debt; it could be expressed in traditional terms as paying a ransom to the devil” (93-4). The very vagueness and flexibility of sacrificial imagery was able to keep together aspects of the atonement that might otherwise have fallen apart. Sacrifice offered a more or less complete picture of atonement without pretending to tie up all the loose ends regarding the mechanics of atonement. Sacrificial accounts of the atonement acknowledge the “ambiguous and elusive character of the relationship between God and evil in his creation” (94), providing a way of speaking about God’s sovereign control as well as dramatizing His real conflict with opposing forces.

Sacrifice also allowed for an integration of the work of Christ and the life of he church: “For the early Church, there was an intimate relationship between the sacrifice of Christ and the sacrificial worship and service of the Church; there was an indissoluble bond linking Christ’s sacrifice of obedience to the spiritual sacrifices of the saint and the martyr” (95). Sacrificial atonement means corporate atonement: “When we see the sacrifice of Christ in the context of the worshipping community, we have a new perspective. The believing Christian does not simple enter as an individual into a moral and emotional identification with Christ . . . but takes his place in a community which is, or at least attempts to be, the body of Christ on earth” (98). Sacrificial atonement linked especially to the chief liturgical event of the early church, the Eucharist: “the sacrifice of the eucharist was the culmination of a total spiritual cult involving the whole life and service of Christians. It was the self-offering of Christians in response to the self-offering of Christ – and not simply a response, for this was not another offering but the same offering as his, redeemed humanity united in offering homage to God” (99).

Young thinks that a version of penal substitution fits into this account: “Atonement means a conviction that God has somehow dealt with evil, with sin, with rebellion. Perhaps the nearest we can get to expressing this is to say that on the cross, God in Christ entered into the suffering, the evil, and the sin of the world; he entered the darkness and transformed it into light, into blazing glory. He took responsibility for the existence of evil in his creation; he bore the pain of it and the guilt of it; he accepted its consequences into himself, and in his love reconciled his holiness to a sinful and corrupt humanity, justifying the godly, accepting man just as he is” (94).

There are things to quibble with here (does God’s entry into darkness mean that humanity gets accepted, or that man, accepted, is made acceptable?). Overall, though, Young’s is a brilliant explanation of the importance of sacrificial categories in atonement theology, and a caution about the loss involved when sacrifice is expunged from theology. 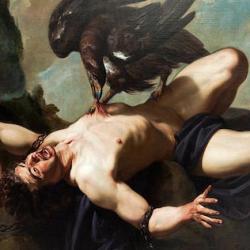