In The Anti-social Family, recently republished by Verso, Michele Barrett and Mary McIntosh lament that, for all the hubbub about changing gender roles, not all that much has changed: “A gross asymmetry in heterosexual relations remains, despite these improvements. Men still seek and are willing to pay for the services of prostitutes, often asking for the fulfillment of the most bizarre fantasies and fetishes. They pour huge sums of money into the burgeoning trade of pornographic magazines, pictures, films and video-tapes which represent women as the objects of male desire. Clubs, pubs and conferences of businessmen and union men are routinely entertained with girly strip-shows. Men still rape women. Fathers still commit incest with their daughters. It is practically never the other way round” (73-4).

The culprit? Barrett and McIntosh argue that the problem is that families remain too traditionally hierarchical. This is not a natural order, but a social construct and a political decision. It only looks natural because “deep-seated differences between the sexes do tend to be reproduced from generation to generation by the fact that children are reared by a pair of differentiated parents” (75). The traditional family’s “polarity of active and passive, with its echoes of hunter and hunted, possessor and possessed, permeates almost all sexual relations, whether between women, between men or between women and men. No sexual relation can be entirely free from the pervasive imagery based on marriage.” The “oppressive and unbalanced nature of the family . . .  creates the kind of sexuality that exists outside it. Confining sex within marriage is not the answer to the problem; at the social level it is itself the cause of the problem” (76). And the solution, the authors argue, is to disassemble the family that has such damagingly anti-social consequences.

It’s been a long time since 1982 and video-tapes. But the authors must believe their analysis still holds, since they reprinted the book earlier this year. Several decades on, one might have thought that we had some empirical evidence about the dismantling of the traditional family, especially in those parts of the world where illegitimacy and single-parent families are common. One is curious to know if the authors think this experiment in non-traditional family life has been a success. With traditional families collapsing in our inner cities, have the men finally been tamed?

As R.R. Reno points out relentlessly, progressivism is a luxury of the one percent.

May 8, 2015 The Imperialism of Liberal Reason
Browse Our Archives
Related posts from Leithart 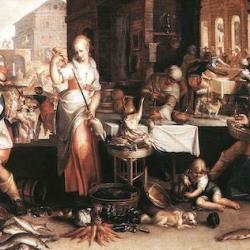