In an essay in Judgment & Grace in Dixie, Charles Wilson Reagan traces the evolution of Southern civil religion from 1920 to 1980. He argues that over the decades the civil religion of the lost cause “evolved from a public faith celebrating the virtues of a religiously sanctioned regional culture to preoccupation with what the region’s new destiny was on the national and indeed universal human scale.” The new South was to provide a vision for America’s renewal, and through America the world (19).

Early on, Confederate civil religion was a sober and sobering faith: “Two key theological concepts were at the heart of the religious interpretation of the Confederate experience – Southerners were a chosen people, but they were also a Tragic People. They had been destined to crusade with honor for a cause they saw as right, but they were destined to lose and suffer” (20-21). The South’s history embodied a message relevant to all humanity, a lesson about dignity in defeat and a parable of the tragic sense of life. Little wonder that Southerners could turn to the history of Israel – chosen, delivered, defeated – as a model of their own history.

One of the key moments in this evolution was the Civil War centennial in the early 1960s. It “was a national fad, a modern American event that advertisers love.” It was celebrated with Civil War memorabilia, battle reenactments, and fed Southern interest in genealogy. Reagan says that “the striking fact is that Southerners as a group in this era showed little interest in being reminded of defeat. Southerners were interested in the Confederacy of 1861, in the fighting itself, not in the South of 1865.” The older Southern civil religion, rooted in belief in Southern chosenness and the universal significance of Southern tragedy, wasn’t highlighted: “it seemed that the spiritual meaning, the religious significance, of defeat, which Southerners had once dwelled upon, had been forgotten” (26).

Reagan cites two Southern writers of the early 60s who offered more penetrating analyses of the centennial. Robert Penn Warren wrote that “any common lyncher becomes a defender of the southern tradition, and any rabble-rouser the gallant leader of a thin gray line of heroes.” Warren believed that (in Reagan’s words) “the Confederates offered the lesson that human dignity and grandeur are possible, even amid human weakness and vice, but the actions of contemporary southern leaders were a debasement of the Southerner’s history, ‘with all that was noble, courageous, and justifying bleached out, drained away’” (26-27).

Walker Percy wrote of the similar degradation of the Southern heritage: “When Lee and the Army of Northern Virginia laid down the Confederate flag in 1865, no flag had ever been defended by better men. But when the same flag is picked up by men like Ross Barnett and Jimmy Davis, nothing remains but to make panties and pillowcases with it” (quoted, 27). As Reagan points out, when you can get Confederate flag jogging shorts, you’ve come a long way from Chosenness and Tragedy.

The erosion of the religion of the Lost Cause might provide an opportunity for Southern churches. Unburdened by the noble, tragic faith of the Confederacy, the South might become what it is in reputation – a genuinely Bible belt.

June 26, 2015 Sea and the Dry
Browse Our Archives
get the latest from
Evangelical
Sign up for our newsletter
POPULAR AT PATHEOS Evangelical
1

Evangelicalism: Where have all the young...
Determinetruth
Related posts from Leithart 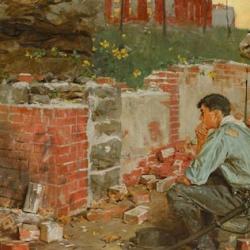 Evangelical
Niebuhr and Mission to the Jews
Leithart

MLB's Hall of Fame and the Relief of...
As I watched my beloved Auburn Tigers almost lose their first game...
view all Evangelical blogs
Copyright 2008-2021, Patheos. All rights reserved.