Jesus condemned the temple as a “den of thieves.” He was quoting Jeremiah, who said that the Jews of his time were using the temple as a “safe house” where they could store and enjoy their ill-gotten gains. The temple was not where their thieving took place, but their hideout.

Jesus’ condemnation is similar, but the thieving of the temple authorities themselves was part of the picture. Markus Bockmuehl notes that Jesus was only one of many who condemned Herod’s temple and predicted its fall. They recognized similarities between the evils of late Judah and those of the first century, and drew the logical conclusion from the analogy.

Bockmuehl writes, “the corruption of the presentpriestly aristocracy in Jerusalem invited comparison with earlier prophetic oracles of judgement and destruction. Of key significance must have been offensive fact that of the high priests between 37 B.C. and A.D. 70, all but two came from four power-hungry, illegitimate non-Zadokite families.“ But quite apart from this, it is becoming increasingly clear that the operation of the Temple, which most devout Jews regarded as the physical centre of their religious practice, was in the hands of a vast network of economic and religious oppression. The priestly hierarchy which controlled the operation of the Temple also appears to have had a monopoly on the sale of sacrificial animals and virtually all other commercial transactions relating to the cult, whether these were located in the Temple Court proper or on the Mount of Olives” (15).

He cites evidence from the Midrash that the price of doves – the offering for the poor – was artificially inflated. The Pharisees Simeon ben Gamaliel was incensed enough at the abuses that he argued that the offering was not required.

The temple authorities operated what amounted to a Mob network: “The legitimate and necessary operation of the Temple was supported by a maze of intrigue, nepotism, and corruption,which is amply reflected in Josephus and early rabbinic sources. In particular, the hierarchy operated agents and hit squads known as “men of violence” and the “big men of the priesthood”; included among these was the Levitical Temple guard, whose armed forays on behalf of the Sanhédrin are also encountered on the pages of the New Testament. Josephus records that thugs employed by the High priests used to rob the tithes intended for the priests, and a well-known Baraita in the Babylonian Talmud complains about the four illicit priestly family who so ruthlessly exercised power over the Temple and its treasury” (15).

From Josephus and the rabbis comes evidence of “the utter luxury and extravagance of the priestly aristocracy in Jerusalem before the First Revolt.

No wonder Jesus was incensed at what had been done to His Father’s house of prayer.

February 1, 2016 Trump of the Lie
Browse Our Archives
Related posts from Leithart 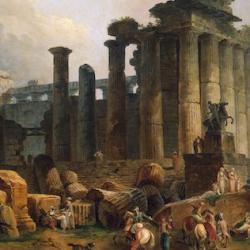 Evangelical
In the Temple
Leithart

Evangelical
In the Temple
Leithart
TRENDING AT PATHEOS Evangelical