Nietzche (AntiChrist) claims that German philosophy is descended from German theology. Kant’s victory is a theological one.

Nietzsche’s own position, though, is equally theological, a different one. But not that different, because like Kant he’s a low church Protestant attacking decadent priestly religion. The priest (section 26) is “a parasitical kind of man that thrives at the expense of all healthy forms of life, the priest, misuses the name of God: he calls a condition of society in which the priest determines the value of things the ‘kingdom of God.’”

Everything about this religion is a support for corrupt priestly power: “the ‘will of God’ (that is to say, the conditions for the preservation of priestly power) must be known – to this end a ‘revelation’ is required. In plain English: a great literary forgery becomes necessary, a ‘Holy Scripture’ is discovered – it is made public with all hieratic pomp, with days of penitence and cries of lamentation over the long sinfulness. The ‘will of God’ had stood fast for the longest time: the whole disaster lay in their having become estranged from the ‘Holy Scriptures’ . . . The ‘will of God’ had already been revealed to Moses. . . .What had happened? The priest had, with severity, with pedantry, right down to the rates great and small he was to be paid ( – not forgetting the tastiest pieces of meat: for the priest is a beefsteak-eater), formulated once and for all what he wants to have, what the will of God is’ . . . From now on the things of life are so ordered that the priest is everywhere indispensable.”

Priests remove the sacredness of nature, and impose sanctions on natural behavior, all to bolster their authority: “The priest de-values, de-sanctifies nature: it is at this price he continues to exist at all. Disobedience toward God, that is, toward the priest, toward ‘the Law’ now receives the name of ‘sin’; the means for one’s ‘reconciling with God’ again are, as stands to reason, means by which subjection to the priest is even more thoroughly guaranteed: the priest alone ‘saves’. . . Psychologically re-reckoned, ‘sins’ become indispensable to any society organized by priests: they are the actual handles of power, the priest lives on sins, for him it is necessary that sins be “committed” . . . Highest precept: ‘God forgives those who do penance’ – in plain English: those who subject themselves to the priest.”

The church takes the nihilism of late Judaism a step further (section 27): “the small rebellious movement baptized with the name of Jesus of Nazareth, is the Jewish instinct once more – in other words, the priestly instinct which can no longer endure the priest as reality, the discovery of an even more abstract form of being, an even more unreal vision of the world than the organization of a church stipulates. Christianity negates the Church.” 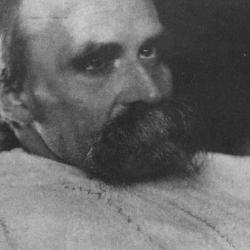