Bread for the World

In the Holy Place of the tabernacle, there was a table toward the north, spread with twelve loaves of “showbread” or “bread of the presence.” To the south was a golden lampstand, seven lamps making a burning tree.

The Holy Place provided a glimpse of Israel’s place and mission in the world.

Twelve loaves = Israel. Seven lamps = the unsleeping eyes of the Spirit watching over Israel. Lamp and loaves are a snapshot of election, of the Creator’s special oversight of this people.

July 1, 2016 Gone Fishin'
Browse Our Archives
get the latest from
Evangelical
Sign up for our newsletter
POPULAR AT PATHEOS Evangelical
1 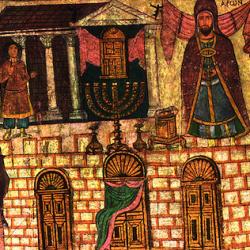 Evangelical
The Ark and the Tent
Leithart

Evangelical
Inside Out
Leithart

Evangelical
You Are A Temple
Leithart

Doubling-Down on Christian Persecution: The Cost of Following...
Christian, a day is coming when you will be forced to make...
view all Evangelical blogs
Copyright 2008-2020, Patheos. All rights reserved.