Is Language a Tool?

Daniel Everett thinks language is a tool, and has written a book about it: Language: The Cultural Tool. He develops his theory over-against the notion that language is the product of a biological “instinct.” On this Chomskyan/Pinkerian view, “language is part of our genetic endowment and that, because of this, all human languages share an almost identical grammar—which includes sound systems and meanings. Under this view, the only significant differences between languages are their vocabularies. But this is not the only available explanation for the growth and presence of language in all humans.”

Everett’s own studies of Piraha, the language of an Amazonian tribe, have led him to dispute the notion of a “Universal Grammar.” He acknowledges that the cognitive capacities evident in human language are part of our evolutionary endowment as human beings: “Language is possible due to a number of cognitive and physical characteristics that are unique to humans but none of which that are unique to language. Coming together they make language possible.”

Still, within a “complex interplay” of biology and culture, “the fundamental building block of language is community.” If there’s an instinct, it’s not a language instinct but something more basic and more universally recognized (since Aristotle, at least): A social instinct.

Language evolved out of the need to relate to other humans: “all human languages are tools. Tools to solve the twin problems of communication and social cohesion. Tools shaped by the distinctive pressures of their cultural niches—pressures that include cultural values and history and which in many cases account in many cases for the similarities and differences between languages.” His book is full of argumentation for this proposal, but he summarizes the evidence at the beginning: “empirical support comes from the general wattage of human neurology, our capacity for learning, and from the knowledge that many properties of language are forged by forces outside the brain.”

Is this right? I’m doubtful. Everett sets up the question of language’s origins as one of “problems” and “solutions.” Humans have a biological instinct toward community, but to achieve community and the communication on which it depends, we developed the “tool” of language. If I may caricature to make a point: That suggests a speechless gathering of humanoids, experimenting with this and that (hand gestures, colored berries, different sized sticks) until they arrived at articulated sound as the best way to communicate. But how could they begin to “solve” this problem unless they were already communicating in some fashion. The invention of language seems to depend on its preexistence.

Besides that, I doubt that all (or even most) uses of language fit under the rubric of “tool use.” What “problem” am I solving if I tell a joke? Or sing to the woman I love? We can reduce jokes to evolutionary tricks to maintain the species, I suppose, but the explanation itself sounds a little like a joke. We can explain the love song by saying it’s about the perpetuation of the species, but try telling that to the singer. What problem of social cohesion or communication is Everett solving with his book? If we’re to believe Genesis 2 (and Everett doesn’t, not anymore), the first language use wasn’t a cry of pain or a grunt of demand but a love poem. Language begins as art, not tool.

Then there’s this: “Language is how we talk. Culture is how we live.” On the face of it, that is an odd distinction, since so much of “how we live” involves language. Why isn’t culture inclusive of language? Everett seems to want to maintain the distinction so that culture can be treated as an independent causal factor in the formation of language. But that leads back to the aporia of the invention of language: Culture can’t be a cause of language because the two are so coinherent that we cannot isolate either from the other. It seems rather that we have complex sets of “language-cultures,” ways of life in which language always-already existed and ways of talking always-already attached to ways of life.

January 10, 2017 The Geography of David's Conquest
Browse Our Archives
Related posts from Leithart 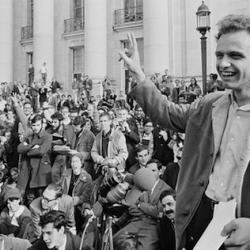 Are People in Heaven Praying for Those on...
(You can also listen to my thoughts related to this question.) The answer is...
view all Evangelical blogs
Copyright 2008-2021, Patheos. All rights reserved.
Close Ad