James Jordan has often called attention to Ezekiel 43:10-11, where the Lord explains the purpose of the elaborate temple vision that He has shown the prophet. When Israel hears the design and plans of the temple, its entrances and exits, it straight lines and its corners, they will “be ashamed of their iniquities.”

Jordan argues that the temple represents an ideal society. Israel’s life together is supposed to mimic the lines and gates and entries of the temple. Israel is to be a living house where Yahweh dwells.

Buildings are often expressions of power and wealth; what sort of power and what use of wealth? Architect Daniel Lee notes that Louis XIV built Versailles not merely to glorify his own power as Sun King but also to deplete the resources of the French nobility by requiring them to wear expensive garments to enter the palace. It’s a common theme of new urbanism that urban planning can inhibit or encourage community and love of neighbor, encourage it by providing places for gathering and meeting, inhibiting it by dividing neighborhood from neighborhood with interstate highways.

Architecture can be part of the pursuit of God’s kingdom and its justice, or the opposite. 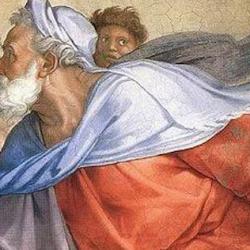 Evangelical
River from the House
Leithart
TRENDING AT PATHEOS Evangelical

The Hopeful Theodicy: God takes on all our...
When the God-man wept before the tomb of Lazarus, He gave us...
view all Evangelical blogs
Copyright 2008-2020, Patheos. All rights reserved.