The following is an extract from chapter 1 of my Against Christianity (Canon Press, 2003).  You can get a 30% discount on the book by entering LEITREADER during checkout at www.canonpress.com/AgainstChristianity

Christianity is the heresy of heresies, the underlying cause of the weakness, lethargy, sickness, and failure of the modern church.

In a sense, I have stated a simple fact: The word “Christianity” does not appear in the Bible, so it is quite impossible for the Bible to encourage us to believe or preach or practice Christianity. In itself, this linguistic fact has little significance. I worship and pray to the Triune God, though the word “Trinity” never appears in Scripture. Even the absence of “Christianity” is not entirely irrelevant, because it demonstrates that God is perfectly capable of revealing Himself and His plan without using that word.

More important, however, is the fact that the Bible does not even have the concept of Christianity.

This, of course, begs the question of what I mean by “Christianity.” On the one hand, Christianity sometimes refers to a set of doctrines or a system of ideas. It is contrasted with the teachings of Judaism, Buddhism, Hinduism, or Islam. By this definition, Christianity is what Christian people believe about God, man, sin, Christ, the world, the future, and so on. The Bible, however, never speaks of such beliefs except as all-embracing, self-committing confessions of God’s people. The Bible gives no hint that a Christian “belief system” might be isolated from the life of the church, subjected to a scientific or logical analysis, and have its truth compared with competing “belief systems.”

The church is not a people united by common ideas, ideas which collectively go under the name “Christianity.” When the Bible speaks of a people united by faith it does not simply that we have the same beliefs about reality. Though the New Testament does use “faith” to refer to a set of teachings (e.g., 1 Cor. 16:13; 1 Tim. 4:1; 2 Tim. 4:7), “faith” stretches out to include one’s entire “stance” in life, a stance that encompasses beliefs about the world but also unarticulated or inarticulable attitudes, hopes, and habits of thought, action, or feeling. To be of “one mind” (Phil. 1:27) means to share projects, aspirations, and ventures, not merely to hold to the same collection of doctrines. Besides, the church is united not only by one faith but also by one baptism (Eph. 4:4-6), manifests her unity in common participation in one loaf (1 Cor. 10:17), and lives together in mutual deference, submission, and love.

The Bible, in short, is not a ideological tract and does not teach an ideology. Scripture does present a certain view of the world that has true propositional content. But it is an error, and a fatal one, to suggest that, once we have systematized the propositional content of Scripture, the result is a “worldview” called Christianity to which we can give our assent, and there an end. French usage notwithstanding (christianisme), it is a radical distortion to think of Scripture’s teaching as an “ism.”

Scripture does not urge us to embrace “religion” in this sense. The Christian is not a natural man who has become religious. Already before conversion, Paul said, many early Christians were highly religious, devoting themselves earnestly to the worship of idols. Conversion, moreover, did not just involve a change of liturgical habit. According to the New Testament, the Christian participates in a new creation (2 Cor. 5:17), a Spiritual person in contrast to the natural person (1 Cor. 2:6-16), a human who is, as many recent theologians have put it, human in a different way. To be a Christian means to be refashioned in one’s deepest and most shallow desires, aims, attitudes, actions.

This is not a matter of giving shape to unshaped human nature. There is no formless underlying “human stuff” waiting to be molded into a Christian shape. We have no “desires” or “aims” or “thoughts” or “attitudes” in general. We always desire certain things rather than others, aim in one direction and not another, think about this or think about that — the stuff is always already formed. For the unbeliever, the problem is not that the stuff is unformed but that it is badly and wrongly formed and has to be reformed and transformed into the form of Christ. If one is a Christian at all, he or she is (however imperfectly) a Christian from head to toe, inside and out. As the late liturgical scholar Mark Searle put it, everyone has a way of “leaning into life,” and the Christian strives to “lean into life,” all of life, Christianly. Conversion does not simply install a new, “religious” program over the existing operating system. It installs a new operating system.

Christian community, by the same token, is not an extra “religious” layer on social life. The church is not a club for religious people. The church is a way of living together before God, a new way of being human together. What Jesus and the apostles proclaimed was not a new ideology or a new religion, in our attenuated modern sense. What they proclaimed was salvation, and that meant a new human world, a new social and political reality. They proclaimed that God had established the eschatological order of human life in the midst of history, not perfectly but truly. The church anticipates the form of the human race as it will be when it comes to maturity; she is the “already” of the new humanity that will be perfected in the “not yet” of the last day. Conversion thus means turning from one way of life, one culture, to another. Conversion is the beginning of a “resocialization,” induction into an alternative paideia, “inculturation” into the way of life practiced by the eschatological humanity.

In the New Testament, we do not find an essentially private gospel being applied to the public sphere, as if the public implications of the gospel were a second story built on the private ground floor. The gospel is the announcement of the Father’s formation, through His Son and the Spirit, of a new city, the city of God.

“Modernity” refers to the civilization of the West since about 1500. Culturally, modernity is characterized by “value pluralism,” which entails the privatization of religious institutions and religious claims. Every individual and every group chooses its own values, and civil society is the arena where those values enter into combat. Politically, modernity is shaped by “liberalism,” the political system dedicated to the one proposition that political systems must not be dedicated to one proposition.[1]

Though it has roots in the patristic period, Christianity in its more developed form is the church’s adjustment of the gospel to modernity, and the church’s consequent acceptance of the world’s definition of who we are and what we should be up to. Christianity is biblical religion disemboweled and emasculated by (voluntary) intellectualization and/or privatization.

Christianity is not merely a haphazard embrace of the values and practices of the modern world. Worldliness in that sense has plagued the church since Corinth, and will be a temptation to the end of time. Christianity is institutionalized worldliness, worldliness accepted in principle, worldliness not at the margins but at the center, worldliness built into the foundation.

Christianity is worldliness that has become so much our second nature that we call it piety.

We have made the church strange and alien to the world, as if she were of a completely different order than the institutions of common social and political life. Paradoxically, the result of this estrangement has been to reshape the church into the image of the world.

The church is strange: She is the creation of the Father through Word and Spirit, the community of those who have been united by the Spirit with the Son, and therefore brought into the eternal community of the Trinity. She is a city whose town square is in heaven. She is a city without walls or boundary lines, a polity without sword or shield. Of no other society can that be said.

But she is ordinary: The church is made up of human beings, with features that identify her as a culture among the cultures of the world. God did not enter a world of books with blurks; He did not intervene in a world of rituals and meals with spatuals and gleals; He did not call His people to live according to specific quormal principles or to promote a particular uphos.

Rather: God created a world of stories, symbols and rituals, community rules. Into this world of stories, God introduced a rival story; into a world of books, God came with His own library; in a world of symbols and rituals and sacrificial meals, the church was organized by a rituals bath and a feast of bread and wine; in the midst of cultures with their own ethos and moral atmosphere, God gathered a community to produce the aroma of Christ in their life together.

Only by insisting on the church’s ordinariness can we simultaneously grasp her strangeness.

The church can “cut across” the grain of existing human social and cultural life only if she bears some likeness to existing societies. If she is a completely different sort of thing, then societies and nations and empires can go on their merry way ignoring the church, or, equally deadly, find some murky alleyway to push her into.

But: If the church is God’s society among human societies, a heavenly city invading the earthly city, then a territorial conflict is inevitable.

[1]Charles Taylor’s definition of secular modernity is handy: “Modernity is secular, not in the frequent, rather loose sense of the word, where it designates the absence of religion, but rather in the fact that religion occupies a different place, compatible with the sense that all social action takes place in profane time.” Taylor is delighted with this: “We’re living in the best political order yet achieved in human history.” I am not; if all social action takes place in “profane time,” then the church’s actions do not qualify as social actions. These quotations are from an interview with Taylor by Bruce Ellis Benson, “What it Means to Be Secular,” Books & Culture 8 (July/August 2002), p. 37. 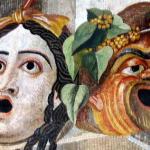 A Dialog with a Critic: The Metaphysical Illusion...
If we wish to follow the Logos where He leads, we need...
view all Evangelical blogs
Copyright 2008-2017, Patheos. All rights reserved.