John Neville Figgis (Pluralist Theory of the State) acknowledges that corporate persons exist. The key question is: “how is this personality to be conceived? Is it a natural fact, the expression of the social union; or is it merely something artificial imposed upon the body for its own convenience by the state? Is it real or fictitious, this legal personality?” (117).

On the current theory, these associations are either contractual or are created by the state: “it is necessary to treat them as what they are not, i.e., as persons; therefore the sovereign power by its own act grants to such bodies as it pleases the name of corporation, and with it endows them with a ‘fictitious’ personality; since, however, it is a mere matter of convenient imagination on the part of the law, and corresponds to no reality in the collective body, its entire genesis and right are merely a delegation of the sovereign authority. All corporations owe their existence to a grant or concession of the state, tacit if not express, which may be given or withheld” (117).

But this is itself a fiction, since these corporations – families, educational institutions, businesses, churches – make up the pattern of social life. They aren’t dependent on the state for their existence. The modern theory of corporations assumes that, prior to the state’s magic, there is nothing to society but a “sand-heap of individuals, all equal and undifferentiated, unrelated except to the state” (128).

In fact, society consists of “an ascending hierarchy of groups, family, school, town, county, union, church, etc., etc. All these groups (or many of them) live with a real life; they act towards one another with a unity of will and mind as though they were single persons; they all need to be allowed reasonable freedom, but must be restrained from acts of injustice towards one another or the individual” (128).

In a sense, these corporations are not merely prior to the state but prior to the individual: “they are all means by which the individual comes to himself. For in truth the notion of isolated individuality is the shadow of a dream, and would never have come into being but for the vast social structure which allows a few individuals to make play, as though they were independent, when their whole economic position of freedom is symbolic of a long history and complex social organization” (128). 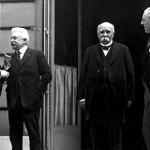 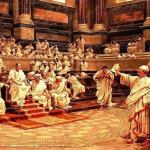 Evangelical
The Truth of Fiction
Leithart

Evangelical
Of Saints and Senators
Leithart
TRENDING AT PATHEOS Evangelical