Adrian Vermeule has a brilliant review of Ryszard Legutko’s Demon in Democracy. He begins with Tocqueville’s observation that the French Revolution “developed into a species of religion” but one without ritual.

Legutko, and Vermeule following him, dissent: “The Revolution’s descendants not only possess a theology and eschatology, but a central sacrament and an accompanying liturgy. Indeed, they compulsively, helplessly re-enact that liturgy, with mounting anxiety, while priding themselves on their freedom from all superstition.”

Legutko seeks to demonstrate that “communism and liberalism have the same inner logic, the same intellectual structure, and the same dynamics over time.” It’s an eschatological structure. Both systems are “perpetually poised in the now and not-yet, between the emergence from the dim night of unreason and the final triumph.”

Liberalism is in the salvation business, and doesn’t tolerate competition: “liberal egalitarianism generates pervasive suspicion and distrust of competing associations and institutions, which come to be perceived as breeding grounds of special privilege.” Orthodox religion is the greatest of offenses: “Salvation is a good that is unequally distributed and thus amounts to the ultimate illegitimate privilege.”

Liberalism needs forms of association but it “tends to dissolve intermediate institutions and traditional groupings—family, community, church.” In place of these forms of community, it provides political commitment, expressed in ritual:

“Individuals forge this new identity by inventing and participating in ecstatic political rituals that aspire to combine perfect equality with perfect freedom. Especially prominent are politicized ‘language rituals,’ also a characteristic of life under communism; ‘the more participants, the noisier the political rites, the more impressive seemed to be the performance of the entire political system.'”

And this brings us to the “sacramental character” of liberalism. As Legutko puts it, “The liberal-democratic mind, just as the mind of any true communist, feels an inner compulsion to manifest its pious loyalty to the doctrine. Public life is full of mandatory rituals in which every politician, artist, writer, celebrity, teacher or any public figure is willing to participate, all to prove that their liberal-democratic creed springs spontaneously from the depths of their hearts.”

Thus, as Vermeule says, “The more the Enlightenment rejects the sacramental, the more compulsively it re-enacts its founding Festival, the dawning of rationality.” These rituals are particularly directed to the enemies of Reason, that is, to orthodox religions:

“Liberalism needs an enemy to maintain its sacramental dynamism. It can never rest in calm waters, basking in the day of victory; it is essential that at any given moment there should be a new battle to be fought. The good liberal should always be able to say, ‘We have made progress, but there is still much to do.’ This is why the triumph of same-sex marriage actually happened too suddenly and too completely.”

Vermeule concludes: “Man is a sacramental animal who cannot deny his own nature. . . . If ritual is rejected in theory, it will be aped in reality as a kind of compulsion.” 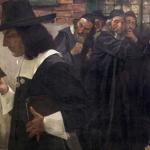 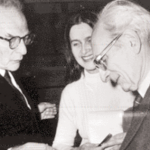 November 17, 2017 The Original Structuralist
Recent Comments
0 | Leave a Comment
"NOOOOOO 😭😭Z.2633K.US/ab4859Z"
Moon-Lily Tamar the Righteous
"wow! pretty fast, i must sayf.636WN.CO/Nq4859U"
joeman123456 The Hidden One
"I ship them, come at me however u want I don't care. I want them ..."
TheEventHorizon Tamar the Righteous
"After reading it, I couldn't help thinking of my favorite book💯W.GEOGIPHY.COM/R4859m"
FaqSands Divine Simplicity: An Experimental Response
Browse Our Archives
Related posts from Leithart