Mark Lilla devotes a chapter of The Shipwrecked Mind to an exposition of the thought of Franz Rosenzweig, setting him in the context of the 20th-century revolt against Hegel.

It was, on the one hand, a revolt against 19th-century Hegelian conceptions of history: “Throughout the nineteenth century, Hegel had been understood, correctly or not, as having discovered a rational process in world history that would culminate in the modern bureaucratic state, bourgeois civil society, a Protestant civil religion, a capitalist economy, technological advances, and Hegel’s own philosophy.”

Toward the end of the century, thinkers began to realize that the Hegelian utopia was in fact a dystopia: “horror set in and a deep cultural reaction followed in Germany and in other countries where Hegel’s ideas were influential. Expressionism, primitivism, fascination with myth and the occult—a Pandora’s box of movements and tendencies was opened. The horror was genuine: if Hegel and his epigones were right, the whole of human experience had been explained rationally and historically, anesthetizing the human spirit and foreclosing the experience of anything genuinely new, personal, or sacred. It meant, in Max Weber’s chilling phrase, ‘the disenchantment of the world.'”

This reaction took a variety of forms. Some reverted to Kant and Descartes. Nietzsche “took a more subjective path” (Lilla’s characterization). Husserl and and the young Heidegger developed an anti-Hegelian phenomenology.

This is where Lilla places Rosenzweig: “Rosenzweig would come to share Heidegger’s conviction that from its very inception philosophy had made an error by turning away from what Rosenzweig called ‘the everyday of life’ and had lost itself in what Heidegger called ‘metaphysics.’ And this error could only be rectified through a new kind of therapeutic thinking that would return human beings to ordinary experience.”

Rosenzweig’s  reaction to Hegel was also a reaction to Hegelian-influenced theology, the accommodation of liberal theology to the Enlightenment: “Hegel did not share the French Enlightenment view that religion was mere superstition; nor did he believe that it would be extinguished by the modern conquest of nature. He thought that Protestantism and the modern state were in fact fundamentally harmonious and that even with the culmination of history religion would continue to serve a quasi-bureaucratic function, helping to reconcile individuals to the state through moral and civic education. The leading German Protestant theologians of the nineteenth century, still bruised from the Enlightenment’s attacks, were willing to accept this limited but secure position in the Hegelian scheme.”

Jewish thinkers developed a form of Judaism that resembled liberal Protestantism: “Once the fundamental moral teachings of Judaism, separated from the dross of superstition and tradition, were shown to be virtually identical to those of Protestantism; once modern Jews became fully participating citizens of a modern state; once, as Hermann Cohen infamously put it, the spiritual harmony of Deutschtum and Judentum was allowed to develop—then, liberal Jews reasoned, the Protestant prejudice would be forgotten and Judaism’s place in the modern firmament would be assured.”

Lilla compares Rosenzweig’s anti-liberal Judaism to the anti-liberal Protestantism of Karl Barth. But he sees a significant divergence between the two: “While Barth believed that a return to the basic faith of Saint Paul and the Reformers was both necessary and possible, Rosenzweig never for a moment considered returning intellectually to any sort of Orthodox Judaism. For him—and, he believed, his entire generation—this was impossible. A century of assimilation had produced Jews so spiritually atrophied that they could no longer be Jews in a full sense without some sort of inner transformation.”

Rosenzweig wrote in 1924 that the great issue of Jewish education had to do with “how ‘Christian’ Jews, national Jews, religious Jews, Jews from self-defense, Jews from sentimentality, loyalty, in short, ‘hyphenated’ Jews such as the nineteenth century has produced, can once again, without danger to themselves or Judaism, become Jews.” 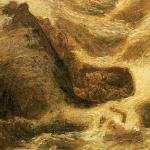