Isaiah’s name – “Yah saves” – is reassuring, and his message of rescue and salvation is a reassuring message because during Isaiah’s time, Judah needs saving, and they need saving again and again.

There are many evils in Judah but more than other prophets of Israel and Judah Isaiah exposes the underlying attitudes that shape the actions and lives of the people of Judah. When Yahweh looks at their hearts, He sees pride, loftiness, arrogance.

Because of the lack of knowledge among the people of Judah, the Lord says that “Sheol has enlarged its throat and opened its mouth without measure,” ready to swallow up Jerusalem’s splendor. As a result, “the common man will be humbled, and the man of importance abased, the eyes of the proud will be abased” (5:13-15).

One of Isaiah’s words for “pride” is gaboah, related to the gibeah, which means “high place.” The people of Judah are arrogant, insolent, lofty, because they worship idols on the high places.

Isaiah takes aim at noblewomen of Judah, with all their finery and jewelry and pride. Yahweh will  remove it all: “instead of sweet perfume, there will be putrefaction; instead of a belt, a rope; instead of well-set hair, a plucked-out scape; instead of fine clothes, a donning of sackcloth; and branding instead of beauty” (3:17-26).

The pride of Judah is evident in her insolence toward the word of Yahweh. The people have stopped listening to the words of the Lord, just like the northern kingdom. In Isaiah 6, Yahweh tells Isaiah that his ministry will be to preach to them so that they will not understand. They have hardened themselves, and they will be hardened further. They have lifted up their hearts against Yahweh, and He is going to give them over to their pride.

Judah’s sin is precisely the sin of the Gentile nations who attack her.

Assyria will fall, Yahweh says, because Assyria has thought of itself more highly than it ought. Yahweh has picked up Assyria like a woodsman picks up an axe. He’s taken the axe to Judah, chopping down the cities and the walls and fortified cities throughout the land. But then the ax begins to boast of its power.

Babylon will fall for the same reason. “You said in your heart, I will ascend to heaven; I will raise my throne above the stars of God, and I will sit on the mount of assembly in the recesses of the north. . . . Nevertheless you will be thrust down to Sheol, to the recesses of the pit” (14:13-15). “How have you fallen from heaven, O star of the morning, son of the dawn!” (14:12).

Egypt’s wise men are also boastful of their wisdom, but Yahweh says that they have become stupid (19:11-15).

The pride of Judah is above all evident in her refusal to trust Yahweh. Yahweh is Judah’s savior, as He has shown again and again. Yet, Judah keeps trusting other saviors.

When Assyria threatens, some in Judah turns to Egypt for help. When Judah is overrun by enemies, many in Judah turned to idols. Isaiah’s message is always the same: Do not trust Egypt, do not trust idols. They are nothings, and they cannot save.

If Yahweh alone is Savior, then He alone is to be trusted. This connection of salvation and trust is the basic issue at the center of the book of Isaiah, emphasized in the central episode, the Assyrian siege of Jerusalem.

The story is about trust. Sennacherib is at the walls of Jerusalem, and Hezekiah has to decide whom he will trust. The Assyrian official, the Rabshakeh, knows that the issue is faith: “Don’t trust Hezekiah. He can’t save you. You can’t trust in Egypt. He’s a broken reed. You can’t trust Yahweh. No other gods have been able to stand against Sennacherib, and your god won’t be able to stand either.”

Hezekiah responds by taking the situation before Yahweh. “Yahweh our God,” he prays, “deliver us from his hand that all the kingdoms of the earth may know that You alone, Yahweh, are God.” Isaiah assures Hezekiah is that the Lord has heard the blasphemies of the Assyrians, and that He will take action. He will stop the mouth of Sennacherib, stop His boasting and arrogance. Yahweh promises that He will save the city for His name’s sake, and Hezekiah celebrates by singing “Yahweh will surely save me; so we play songs on stringed instruments all the days of our life at the house of God.”

Yahweh disciplines Judah’s pride by sending in the Assyrians. But Hezekiah humbles himself to trust in Yahweh, and so Yahweh punishes Assyria’s pride. This central episode exemplifies the way Judah’s kings should act, and the way Judah will be saved. If Judah trusts in Yahweh the Savior, she will be delivered from death. 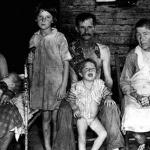 Evangelical
His Anger Does Not Turn
Leithart