Triumph of the Cross

“The principal metaphor is triumph in the Roman sense, which is the reward that Rome bestowed on its victorious generals. Standing on his chariot, the victorious general made a solemn entrance into the city and received the acclamations of the crowd. The enemy leaders, in chains, were led along at the rear of the procession” (139). The display of enemies was essential: “Before the Romans executed these prisoners, they exhibited them like ferocious beasts reduced to utter helplessness” (139).

In Colossians, Christ is the victorious general, the cross his victory. In conquering “principalities and powers,” Christ “conquers . . . the pagan way of organizing the world,” which is now exhibited in all its weakness and frailty (139).

Modern Christians are repulsed at this sort of imagery: “To progressive Christians, proud of their humility” the idea of the “triumph of the cross” seems “absurd.” Paul doesn’t share these sensitivities: “If there exists somewhere a charter of triumphalism, it must be [Colossians] . . . . It may seem to be expressly written to arouse the indication of modernists” (140).

Of course, Christ’s triumph is of a different sort. He achieves victory by submitting to violence rather than inflicting it (140). And for Girard, the victory isn’t prior to the triumphant display; the exposure of the principalities and powers is itself the victory, “the unveiling of the violent origin of culture” (143).

As Girard puts it, “By depriving the victim mechanism of the darkness that must conceal it so it can continue to control human culture, the Cross shakes up the world. Its light deprives Satan of his principal power, the power to expel Satan” (142). The edge of the text consists in its subversion of the power politics of Satan, who thinks “only in terms of military triumph.” He and his minions “are beaten by a weapon whose effectiveness they could not conceive, that contradicts all their beliefs, all their values. It is the most radical weakness that defeats the power of satanic self-expulsion” (143). 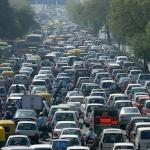 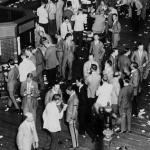 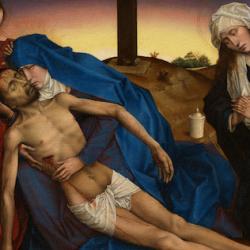