The Song of Songs was among the most popular books for commentary in the Latin middle ages.

Despite important variations in style and conclusions among these commentaries, the commentary tradition was largely allegorical. The Song of Songs was viewed as an allegory of the mutual love of Christ and His church, of Yahweh’s tortured love affair with the nation of Israel and Israel’s yearning for her promised Messiah, or as the longing of the individual soul for God.

In this commentary tradition, the Eros of the Bride is unproblematically recognized. That is hardly surprising. Unlike most of the love poetry of the ancient east and the courtly poetry of the medieval West, the Song is largely spoken by the Bride, and so the passion of the poem is largely her passion. The plural “kisses” in the first lines of the Song point, Bernard says, to the fact that “if anyone once receives the spiritual kiss of Christ’s mouth he seeks eagerly to have it again and again,” and the Bride who longs for more kisses from her Lover is “satisfied” to receive His kiss.

Because of a Hebrew ambiguity and a Latin mistranslation, the words of the bride in the Vulgate of Song of Songs 1:2b reads “meliora sunt ubera tua vino” – “your breasts are better than wine.” Denys the Carthusian knows about the translation difficulty, but defends Jerome and says that the Bride, by recognizing the breasts of her husband as features “she herself possesses” her love is “set on fire all the more intensely” because of “their likeness in this respect.”

What is more surprising, given the allegorical framework for these sermons and meditations, is the fact that the Bridegroom’s Eros is also unreflectingly affirmed. “The main purpose of this work,” Giles of Rome says, “is to give expression to the kinds of desire by which the Bridegroom and the Bride – that is, Christ and the Church – long for one another” (quotation here and in following paragraph from Denys Turner, Eros and Allegory.)

Thomas Gallus, an explicitly Dionysian commentator, says that the “Bridegroom, who is more loving than loved, without any delay responds to these spiritual, burning desires and, as it were, extends his hand.” Commentators had no qualms, apparently, about attributing erotic passion to the Bridegroom, and then immediately adding that the Bridegroom is Christ Himself. From the texts I have examined, there is very little discussion of the point and no apparent recognition that the commentators were making an important, much less a radical, theological claim. For medieval commentators, the Song of Songs was both an obvious depiction of the longings of the soul or of the Church, and an equally self-evident portrayal of divine Eros.

Canticles is a sensual poem and as such obviously represents the desires of the two characters. Still, a few things can be said to elaborate the obvious. The poem as a whole is an interweaving dialog between Bride and Bridegroom. In both individual sections and in the overall pattern of the poem, speeches from Bride and Bridegroom alternate, until the final, Sabbatical section that brings them to final reconciliation.[1]

The interweaving of the two voices highlights the mutuality and reciprocity of the love being depicted. It is also evident that the Bridegroom responds to the Bride’s beauty. Nearly his first words in the Song commend the bride as the “most beautiful among women” (Song of Songs 1:8), and he breathlessly adds “How beautiful you are, my darling (ra’yah), how beautiful you are! Your eyes are doves” (1:15; cf. 4:1). The invitation to “arise, my darling, my beautiful one” is repeated twice (2:10, 13).

Later, the Bridegroom marvels that “there is no blemish in her” (4:7), and calls her “my perfect one” (5:2).[2] She is as “beautiful as Tirzah” and “lovely as Jerusalem,” sublimely awesome in her beauty “as an army with banners” (6:4). In the blazons that punctuate the poem, he dwells in excited detail on the features of her body, once moving from her eyes and face to her breasts (4:1-6) and then reversing the gaze as he glances from her feet to her hips to her navel, her breasts, neck, eyes, nose, and hair (7:1-9).

Moreover, the Bridegroom wants to have the Bride, and ultimately does. Three times in the poem, the Bride speaks of the mutual possession of the lovers (2:16; 6:3; 7:10). These are strategically placed in the poem, the first ending the second unit and the last preceding the corresponding sixth subsection of the poem.[3]

In 2:16, the Bride says “my Beloved is to me, and I to him,” a chiastically arranged declaration in which the Bride’s self-references (“me . . . I”) are surrounded by references to her man. Song of Songs 6:3 is also chiastically arranged, but the arrangement is inverted, so that the Bride now embraces her beloved: “I am to my beloved and my beloved to me.” The text itself thus pictures the perichoretic mutual possession, now enclosing the Bride by the Bridegroom, now surrounding the Bridegroom with the Bride.

More, the Beloved is grammatically inflected by the first person possession; the Bridegroom is not just “Beloved” but “my Beloved” (dody), just as throughout the poem the love names of the Bride are inflected with the Bridegroom’s possessive “my” (my sister, my bride, my perfect one, my dove). From the perspective of the gospel of John (that most “Canticled” of evangelists), the Bride is the beloved community of the Son who has been brought into the internal mutual love of Father and Son. Just as the Father is in the Son and the Son in the Father, so the disciples indwell and are indwelt by both (John 17:21-23).

That reality is figured in the mutual possession statements of the Son. Desire is thus implicated in inter-Trinitarian relations, as well as in relations between God and His church.

Several passages, finally, refer explicitly to the Eros of the Bridegroom:

Turn your eyes away from me, for they have confused me (6:5).

Your head crowns you like Carmel, and the flowing locks of your head are like purple threats; the king is captivated (‘asar) by your tresses (7:5).

The last of these is especially significant. It is the third declaration of mutual possession, but it is modified to include an explicit reference to the Bridegroom’s desire for the Bride. In the earlier instances of this chiastic refrain, the Bridegroom surrounds the Bride, or vice versa. In 7:10, however, the poet breaks with the chiastic structure in favor of a parallel: “I am to my beloved, and on me is his desire.” While his desire is his, it is an ecstatic desire, a desire reaching out to the beloved.

And that desire, which is the furthest thing from being self-contained, is what make the Bridegroom what He is. He is his desire for his bride. Again, we may allegorize toward theology proper: God is the God of Israel. That qualifying genitive phrase – “of Israel” – is no charade, no ornament. It names God in terms of His bride. He has so identified with His Bride that He takes her name.

[2] “Blemish” (molid) evokes the Levitical system. It is the word used to describe physical deformities that disqualify a descendant of Aaron from serving as priest (Leviticus 21:17, 18, 21, 21; 22:20, 21, 25). Though not used directly with reference to the sacrificial system, “perfect” (tam) but the related term tamim is a technical term used to describe qualified sacrificial animals (Leviticus 1:3, 10; 3:1, 6; 4:3, 23, 28, 32; etc.). Used of human beings, tamim typically has a moral connotation (Genesis 6:9; 17:1). This language lends some support to a cultic interpretation of the Song: The Bride is Israel approaching Yahweh for sacrifice, offering “bridal food” (ishshah) to celebrate the marriage supper of the Lord.

[4] The verb puns on leb, heart, and means either that the bride gives or takes away his heart. 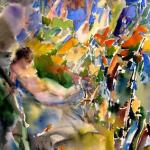