This summary of Wright’s views on justification is taken from passages in his 2006 Paul in Fresh Perspective.

By “covenant,” he means God’s settled promise to Abraham (and through him to others) to put the sinful world back in order, to intervene in the fallen world to deal with sin and death, to exercise “restorative justice” in the world. By “apocalyptic,” he means “the sudden, dramatic and shocking unveiling of secret truths, the sudden shining of bright heavenly light on a dark and unsuspecting world” (53-4).

The trick is to keep these two aspects of Paul together: To affirm with Paul both that what God did in Christ is what He always intended to do, what Jews were hoping He would do and that the way God fulfilled this intention is so surprising that no Jew would have dreamed it.

This pertains to justification by faith because justification has do to with the restorative justice that God promised to bring on earth. What is important for Paul is that this justice has been exercised now, in the present; God is not waiting until the end of things to put things to rights: Through Jesus’ death and resurrection, “God has declared in advance that he has dealt with sin and death, and has summoned the world to the obedience of faith, with the corollary that all those who believe find themselves declared in advance, as part of the apocalyptic unveiling of the ultimate future, to be within God’s true family, whether Jew or Gentile” (57).

To speak of justification by faith is to say that in those who have faith there is “a proper anticipation of the eventual judgment which will be announced, on the basis of the whole life led, in the future” (57).

Does this mean that we are back finally to a kind of semi-Pelagianism, a Christian life that begins in faith and ends in works? Wright denies that he’s saying anything like this, and emphasizes the role of the Spirit.

3) The Spirit. The Spirit’s work is the “route from justification by faith in the present to justification, by the complete life lived, in the future.” Faith, he argues, is the “first-fruit of the work of the Spirit, operating in the human heart through the preaching of the gospel” (148).

The Spirit ensures that this work of faith, and God’s declaration concerning it, is the same as the final verdict at the last day: “the verdict already issued over Christian faith in Romans 3 does indeed genuinely anticipate the verdict to be issued over the entirety of the life led, because the Spirit now at work in you . . . is the Spirit of the God who raised Jesus from the dead.” The way from “initial faith to final resurrection . . . lies through holy and faithful Spirit-led service, including suffering” (148).

4) Faith, call, justification. The formulations in the last paragraphs assume Wright’s views on the relation of faith and justification, and his distinction between justification and call. He insists that justification is not an answer to a question about how we go about being saved; the word justification does not describe the transition “from unbelief, idolatry and sin into faith, true worship and renewal of life” (121).

Paul does talk about sinful men and women being rescued from death and sin, but when he does that he uses the word “call” instead of the word “justify.” People hear the gospel call, and respond in faith, this faith being a work of the Spirit.

Justification answers the questions “who belongs to the people of God?” and “how can we tell?” It’s about “how one could tell, in the present, who God’s true people were – and hence who one’s family were, who were the people with whom one should, as a matter of family love and loyalty, sit down and eat” (159).

Citing Romans 8:30, he argues that justification comes after the call, and is God’s declaration concerning the faith that the Spirit aroused through the call. Where God sees the sole “badge” of membership in His people, faith – as opposed to circumcision, ethnic Jewishness, or any other badge – He judges these to be His people: “his elect, ‘the circumcision,’ ‘the Jews,’ ‘the Israel of God.’ They are given the status dikaios, ‘righteous,’ ‘within the covenant’” (122).

Because God has declared all who have faith in Jesus as “righteous” and members of His covenant family, all believers must do the same, rather than retaining the divisions of the old covenant system.

5) Jew and Gentile. Justification is bound up with the erasure of distinctions between Jew and Gentile in the new covenant; one cannot “separate the doctrine of justification by faith from that of the incorporation of Gentiles into the people of God.”

God declares those who have faith to be His people, sons of Abraham because they have the faith of Abraham, and faith is not ethnically qualified: “the only badge of membership in God’s people is the badge of faith, faith which is open to all, Jew and Gentile alike – otherwise God would seem to be God only of Jews, not of Gentiles also, as would inevitably be the case if Torah, the Law given only to Jews, were the means or standard of definition” (121).

This helps explain why justification takes on a prominence in Paul that it does not have in the teaching of Jesus: Jesus was not facing the issue of Gentile inclusion during His ministry, and, Wright points out, he doesn’t talk about circumcision any more than he does justification.

6) Agents of restorative justice. Those who respond in faith to the gospel are rescued from sin and idolatry and death, but they are also formed into a new community through which God is advancing His “purposes to rescue the whole world.” In short, “through this creation of a Jew-plus-Gentile family the living God [declares] to the principalities and powers that their time is up, and [launches] the whole project of new creation” (122). 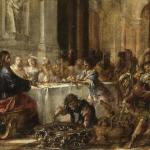 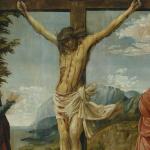 April 11, 2018 Mary at Calvary
Recent Comments
0 | Leave a Comment
"NOOOOOO 😭😭Z.2633K.US/ab4859Z"
Moon-Lily Tamar the Righteous
"wow! pretty fast, i must sayf.636WN.CO/Nq4859U"
joeman123456 The Hidden One
"I ship them, come at me however u want I don't care. I want them ..."
TheEventHorizon Tamar the Righteous
"After reading it, I couldn't help thinking of my favorite book💯W.GEOGIPHY.COM/R4859m"
FaqSands Divine Simplicity: An Experimental Response
Browse Our Archives
Related posts from Leithart

Evangelical
Paul and the End
Leithart