This exhortation was delivered to the graduates of the 2017-18 Theopolis Junior Fellows Program on May 17, 2018.

“Freely you received; freely give.”

Jesus has been teaching, healing, casting out demons, raising the dead, cleansing lepers. Now He empowers His disciples to carry on the same work. Jesus authorizes His disciples as apostles, then sends them out to the twelve tribes.

Their work won’t be easy. Jesus tells them to take nothing, but to depend on the hospitality of those who receive their message. They are like sheep in the midst of wolves. Everyone will hate them, including members of their own families.

That sounds grim, but it’s a privilege. The disciple is not above his teacher, nor a slave above his master. It’s enough that the disciple become like his teacher –in his teaching, also in his suffering.

What’s true of the disciples is true of us all. “You have nothing that you have not received,” Paul says, removing all ground for boasting. We have nothing, we are nothing, in ourselves. We possess what we possess only in the mode of reception.

But there’s another side to this: God could give in a way that makes us mere dependents, but He doesn’t. He isn’t domineering or envious. The giving God gives so that we can become gift-givers, just like our Father.

John and Jacob, your situation isn’t identical to that of the apostles. I’m not Jesus, and you didn’t get what you got from Theopolis for free. But the principle applies just the same.

Over the past year, you’ve received instruction about the Bible. Pass it on: Teach the word. You’ve learned the history and theology of Christian worship. Don’t pack it away: Worship, and teach others to worship. You’ve learned about Trinity, music, poetry, politics. You’ve been given all these things so you can share them.

Augustine said that while corporeal goods can be possessed directly, spiritual goods can be possessed only if they’re given away. I think Augustine’s distinction of carnal and spiritual possessions is too stark. We receive all that we are and have, and no goods are truly ours unless we bring them into a circulation of gifts. We don’t rightly possess anything except in the mode of dispossession.

But here’s the ultimate miracle: If you use a lamp to light other lamps, the source keeps burning undiminished. A teacher doesn’t lose what he gives away. On the contrary, a good teacher is fuller after teaching than he was before.

So, John and Jacob, on this occasion of your graduation from the Theopolis Junior Fellows Program, my exhortation to you is a gloss on the words of Jesus: Freely you received, freely give. Give so you may receive again, and yet again give. 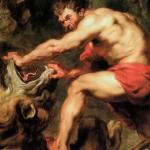 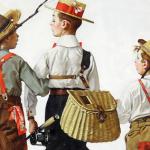