There are Ten Words, but they are grouped in several different ways. The first two commandments stand out from the rest. Only in the first three commandments does the Lord speak in the first person (FW Farrar): “I am Yahweh your God . . . thou shalt have no other gods before My face”; “for I Yahweh your God am a jealous God.” From then third word on, Yahweh speaks in the third person.

Each of the first five also all give rationale, warning, or promise to buttress the command. Israel is forbidden to put any gods before Yahweh’s face because He brought them from Egypt; they aren’t to worship through images because Yahweh is jealous; those who bear Yahweh’s name lightly do not go unpunished; Sabbath-keeping imitates the creative action and rest of God; and respect to parents ensures a long life in the land.

Thus: There is a group of two, the most intimate and personal, where Yahweh addresses Israel as “I.” There are the first five, where Yahweh is named and where He gives a reason. And there are the final five, which are simple prohibitions, without rationale and without reference to the name of Yahweh.

It’s notable that none of these patterns is identical to the traditional division of the “two tables” of the law – the first four dealing with our relation to Yahweh and the final six concerned with our relations with other humans. Grammatically and stylistically, the ten words divide into two groups of five.

The first three commandments also form a group, prohibiting three varieties of idolatry. In the first word, Yahweh forbids us to have other gods before His face, whether they are placed in the shrine of the temple or in the temple of our hearts. The second word prohibits a certain mode of worship, whether of Yahweh or another God. The second word prohibits liturgical idolatry. The third commandment prohibited practical idolatry: Wearing Yahweh’s name but wearing it lightly, without accepting the weight of the Name.

These three forms of idolatry foreshadow Israel’s history of idolatry. During the period of judges, Israel worships the gods of the Canaanites, placing other gods before the face of Yahweh. Under the monarchy, the recurring sin is worship of golden calves or worship at the high places; this worship is directed to Yahweh, but is mediated through images of golden calves or takes place elsewhere than the temple.

Once Israel is cast out of the land, the emphasis changes. Now the temptation isn’t so much to worship the gods of the Babylonians or to worship Yahweh through images, but the practical idolatry of denying the Name of Yahweh that they wear. 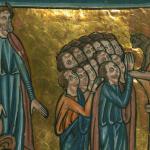 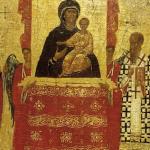 May 9, 2018 No Graven Images
Recent Comments
7 Comments | Leave a Comment
"NOOOOOO 😭😭Z.2633K.US/ab4859Z"
Moon-Lily Tamar the Righteous
"here comes the brother.tr.92186.ME/DY4859Na"
Luna The Ghost Simplicity: Further Exploration
"The sect of the man and enei sect?"
joeman123456 The Hidden One
"In the novel he falls for her after like 40 chapters and goodness gracious he ..."
Fetysh The Hidden One
Browse Our Archives
Related posts from Leithart