The fifth commandment – Honor your father and your mother – is a counter-cultural demand.

Many in our time live according to the 1960s maxim, Question authority. It’s apparently an authoritative command, and it applies in the family as well as everywhere else.

But the counter-cultural character of this commandment runs even deeper. It’s not just the commandment itself that violates contemporary norms. The social picture assumed by the commandment has disappeared in many places.

The command to “honor” assumes a hierarchy. Some are in a high position and deserve our attention and respect. We live in an age of equality. We don’t defer to our betters because we find it offensive to think we have betters.

The command to honor father and mother assumes that unchosen relationships have a moral force. If there’s one thing that we don’t choose, it’s our family and parentage. In our age, choice is the foundation of all moral action. Nearly everything can be justified, so long as it’s sanctified by “consent.” Unchosen obligations can’t be binding.

The reference to father and mother runs against the grain of myths of self-creation. We believe in the self-made man, the buffered self, the isolated individual; every man is an Adam, without the belly button that bespeaks dependence.

We’re commanded to honor father and mother, both of them in the singular. The assumed situation is one where children have one of each sex as parents. Today, many families are constituted from the broken bits of other families; in any household, the children are “yours, mine, ours”; children grow up with multiple fathers and stepfathers, mothers and stepmothers.

Both parents are assumed to be present. Most of America’s children still live with two parents, but a quarter does not. In some sub-communities, the situation is far worse: Three-quarters of African American children are born out of wedlock.

More radically, the fifth word assumes a world where parenthood was a given, an unavoidable reality for every human being.

Reproductive technology has eroded that assumption. A couple can have a child that is genetically their child, but never carried by the mother; children can be manufactured from donated eggs and sperm, so that they have no connection with the parents. Family membership is being detached from biology.

And the changes in marriage law functionally universalize this. Children in same-sex families obviously can’t be biologically related to both parents, and so the relationship between parents and children is legal rather than biological. We’re used to this in adoption, but the changes in marriage law effectively universalize adoption. Adoption becomes the paradigm for all parent-child relations.

To keep the fifth word, we not only have to obey its literal force. We have to reconstruct the social situation that it assumes – two-parent families, the goodness of relations of authority, the limitations of choice and consent, the preservation of families through the whole lifetime of the father and mother. This commandment is foundational to forming a Christian counter-culture in our churches.

But these social changes also mean that we have a huge mission field around us. Families are under stress in all kinds of ways. The church has an opportunity to evangelize and disciple families, so that they become places where it’s possible for the Fifth Word to be obeyed. 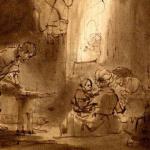