I don’t agree with Seth Postell’s fundamental thesis in Adam as Israel. He states the thesis as follows: “when understood as the introduction to the Torah and the Tanakh as a whole, Genesis 1-3 intentionally foreshadows Israel’s failure to keep the Sinai Covenant as well as their exile from the Promised Land in order to point the reader to a future work of God in the ‘last days'” (3).

Adam, like Israel later, fails to “conquer” the serpent, and so is expelled from his land. That foreshadows Israel’s future exile that, by the end of the Pentateuch, becomes a certainty. This inclusio of pessimism doesn’t encourage Israel to keep covenant; rather, “it forthrightly admits that Israel did not (and will not) keep it, and therefore prepares the reader to wait expectantly in exile for a new work of God in the last days” (4).

Postell neatly supports this by noting that re’shiyt (beginning) and ‘achriyt (the after-things) both appear in the poetic passages that provide structural pillars for the Pentateuch (Genesis 49; Numbers 24; Deuteronomy 31-33; 83, fn 29). Postell is also undoubtedly correct that the contours of the story of Genesis 1-3 repeat later in the Pentateuch.

An example of Postell’s back-to-front reading (97, fn 87): He cites Jeremiah 4 in connection with the “formless and empty” of Genesis 1:2. He sees this as “Jeremiah’s interpretation of the creation account,” an interpretation that “identifies the land in Gen 1 as the garden in Gen 2.” Since the “absence of light in [Jer 4:23] is not the absence of the sun, but the darkness of a hopeless condition,” this means that “Gen 1:3 is also not describing the absence of the sun, but the state of a gloomy proto-exilic land.”

I think the thrust of Jeremiah 4 is different. He is describing the exilic condition of the land by allusions to Genesis 1. That is, exile is a species of decreation, a return to the formless void and darkness of the original earth. He’s not interpreting Genesis 1; he’s interpreting his own times through the categories and images of Genesis 1.

I disagree too with some of Postell’s specific arguments, such as his claim that the Garden of Eden is typologically, if not actually, identified with the land of promise (92). That identification rests on a failure, I think, to recognize the distinctions made in the early chapters of Genesis.

For instance, Postell (rightly, I think) believes that Genesis 1:1 describes a distinct initial act of creation and Genesis 1:2 as the consequence of that initial act (84-5). But he thinks this view has some problems. if, as Postell believes, “heaven and earth” in 1:1 is a merism for a finished creation, then it seems to contradict 1:2, where one part of the cosmos is unfinished, formless and void.

Postell cites the late John Sailhamer’s view that ‘eretz (earth/land) in 1:2 “does not refer to the entire universe (world), but to a specific place in the world, namely the land that is later promised to Abraham and his descendants” (87). Sailhamer argues, among other things, that the reference to “land” in 1:2 prepares for the description of the Garden in Genesis 2. Further, he claims that the “land” is contrasted to the east/Babylon throughout Genesis 1-11; so also in 1:2, it alludes to the Promised land that is the polar opposite of Babylon.

This interpretation, though, rests on a conflation of zones that Genesis 1-2 intends to distinguish. “Heaven and earth” need not be a merism, and the fact that 1:2 says that the earth is formless and empty argues against the meristic reading. Rather, 1:1 indicates that God created two distinct zones, heaven and earth; beginning with 1:2, the focus is on what God does with the earth. From 1:3 on, God forms and fills the area that 1:2 identifies as earth.

Further, the Garden isn’t the same as the land. The Garden exists within the land of Eden. Postell goes further than Sailhamer in the erroneous identification of the land and the Garden, claiming that 2:10-14 lay out “a detailed explanation of the boundaries of the Garden of Eden” (89).

No. These verses describe the destination of the rivers that flow from the land through the Garden and then out to other lands. The river waters the garden, and “from there it divided and became four rivers” (Genesis 2:10). The links between Genesis 2:10-14 and later descriptions of the boundaries of the promised land are true and important; but they aren’t the boundaries of the Garden. The Garden is the original sanctuary, not the original of the land. (Postell is aware of the parallels of Garden and sanctuary (112-3), but doesn’t work this insight through consistently.)

So far my disagreements. There are also some excellent things in Postell’s book.

He offers a careful comparison of Genesis 2-3 with Genesis 15-16: “in both passages the central figure undergoes a deep and divinely induced slumber. . . . both passages provide homogenous geographic information regarding the boundaries of a divinely provided land [see my reservations above] . . . while Genesis 2 does not mention a covenant as does Genesis 15, it is clearly covenantal in nature” (91). Abram’s decision to have a son with Hagar is a fall scene – Sarai speaks as Even did; Abram listens to his wife, as Adam did; Sarai gives the forbidden fruit to her husband, as Eve “gave some to her husband” (93).

Postell also notes that Genesis 15 fits into a repetitive pattern that stretches throughout the Pentateuch. The related passages are Exodus 2-4, Exodus 18-24, and Numbers 10-21. He elaborates, “In each passage there is an appearance of a Gentile priest who blesses an individual and serves ‘bread’ . . . Following the appearance of a Gentile priest there is a theophany in fire . . . . In each of these passages, ‘to believe’ plays a primary role” (91, fn 67).

Given the links between Genesis 2-3 and Genesis 15-16, we can see each of these passages through the lens of Eden. And we can no doubt extend the parallels – for instance, by noting parallels between Exodus 25-31 and the formation of the garden, followed by the fall at the golden calf and threat of permanent exile in the wilderness. 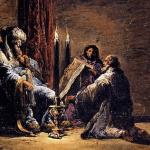