A flawed argument against contraception

Patheos Explore the world's faith through different perspectives on religion and spirituality! Patheos has the views of the prevalent religions and spiritualities of the world.
This post arises from a discussion I’ve been having online with Catholic apologist Dave Armstrong. It began when Dave cited a passage from Calvin condemning contraception on the ground that it is a form of pre-emptive murder. As an offshoot of that discussion, Dave has posted a succinct statement of the “murder analogy” argument against contraception. The core argument goes as follows:

This argument doesn’t work, because you can’t commit a crime against a nonexistent entity. A hypothetical person who would have been conceived under some counterfactual circumstances or other is a nonsensical construct. I can prevent a particular sperm from making contact with a particular egg. But hypothetical people aren’t people. I have no moral duties toward them whatsoever. Murder is wrong because it involves malice toward an existing person.

Step F makes the logical problems in the argument even more evident. You can’t “obliterate” the existence of that which does not exist.

Furthermore, as someone pointed out when Dave originally posted this argument on his Facebook page, the argument proves too much, because a married couple who choose to go for a walk instead of having sex are also committing “murder” by this logic. If preventing the existence of “Person X” is akin to murder, then whether one does so by abstaining from sex or by engaging in non-procreative sex is irrelevant to the nature of the crime against Person X. You can’t import other (much more solid) objections against contraception into _this_ argument, if the argument is to stand on its own two feet. Certainly _if_ non-procreative sex is wrong on other grounds _and_ preventing a person’s existence is wrong, then committing both sins together would be worse than committing only one of them. But if preventing a person’s existence is a crime against them, then it’s a crime no matter how innocent the thing-you’re-doing-instead-of-procreating would otherwise have been.
I can see two ways in which the argument might have some merit, logically:

1. If one could “mess with time” either through time-travel or foreknowledge. So, for instance, if you go back in time to prevent someone who does exist from being conceived, then you are motivated by malice against a specific person whom you know in your present. Of course, we don’t know if this is even possible. Perhaps prophecy could be seen as another example of “messing with time.” So when Merlin in That Hideous Strength tells Jane that she has failed to conceive a child who would have delivered Logres, that makes a certain amount of sense (though it may involve Molinist “middle knowledge,” which is a philosophically controversial concept), because Merlin is capable of prophecy. Even then, though, it makes no sense to say that she did so deliberately, since she did it before she heard the prophecy. Once she heard the prophecy, she could have intentions toward “the child prophesied.” I’m still not sure that it would make sense to say that she committed a crime against said child, though. Her crime, on Merlin’s premises, was rather against Logres.

2. More solidly, the “preformationist” theory to which Calvin and many other premoderns adhered allows you to talk about crimes against future people. If the “seed” is an incipient person or “potential person” then it makes sense to speak of preventing it from fulfilling its potential. Whether that’s actually a crime against the future person is  a difficult philosophical issue, I think, but a case could be made that it is. And that’s what I take Calvin to be arguing. Dave responded to my initial objections to the use he was making of the Calvin passage by saying that I was “failing to see the forest for the trees.” On the contrary, I’m pointing out that the trees in this particular forest won’t make the kind of lumber Dave needs. Without preformationism (or time travel) the “quasi-murder” argument fails utterly, because there’s no one to commit a crime against. 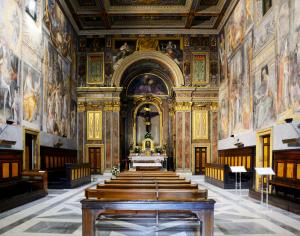 Catholic
My Search for the Perfect Church
Light in the West

Catholic
"Blog tour" for my wife's book
Light in the West

Catholic
Back from diocesan convention
Light in the West

One response to “A flawed argument against contraception”