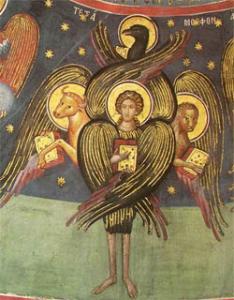 My trusty colleague and sparring partner in matters of Biblical interpretation, “Fellow Dying Inmate,” wrote a post back in August on the book of Revelation that upset a number of readers.

Of course, writing on Revelation is bound to upset a lot of people. I would have thought that Catholics would be less inclined to go ballistic on these subjects than evangelical Protestants, but alas, I’m no longer sure that’s true.

FDI argued, in particular, that the “four living creatures” of Revelation do not represent the four Gospels, as widespread Christian tradition holds, but rather four constellations in the sky, heavenly servants of God. The lion would be Leo and the ox/bull Taurus. (He doesn’t explain what the other two are.) He disparaged the traditional interpretation as “allegory gone wild” and particularly criticized Scott Hahn for making this kind of interpretation popular once more. Instead, FDI argued, we must base our interpretations on the literal sense of Scripture: what the original author intended.

On the Patheos Catholic Facebook page, one reader claimed that this post was further proof that the Patheos Catholic channel isn’t really Catholic. Another suggested trying to get bishops to intervene (presumably to declare us all heretics). As FDI pointed out in some bemusement, this is a pretty extreme reaction to the claim that a particular pious interpretation of weird imagery in a notoriously obscure Biblical book is not in fact justified by the literal sense of the text.

On the other hand, I think FDI’s post does raise a lot of significant questions about how Catholics should interpret Scripture.  FDI rightly points out that Vatican II calls us pay attention to the sense intended by the human authors and to the “literary forms” they used in the context of their own time :

To search out the intention of the sacred writers, attention should be given, among other things, to “literary forms.” For truth is set forth and expressed differently in texts which are variously historical, prophetic, poetic, or of other forms of discourse. The interpreter must investigate what meaning the sacred writer intended to express and actually expressed in particular circumstances by using contemporary literary forms in accordance with the situation of his own time and culture. (7) For the correct understanding of what the sacred author wanted to assert, due attention must be paid to the customary and characteristic styles of feeling, speaking and narrating which prevailed at the time of the sacred writer, and to the patterns men normally employed at that period in their everyday dealings with one another. (DV 3.12)

Having established the importance of careful literary/historical reading of the text, however, the Constitution on Divine Revelation goes on to say this:

But, since Holy Scripture must be read and interpreted in the sacred spirit in which it was written, (9) no less serious attention must be given to the content and unity of the whole of Scripture if the meaning of the sacred texts is to be correctly worked out. The living tradition of the whole Church must be taken into account along with the harmony which exists between elements of the faith. It is the task of exegetes to work according to these rules toward a better understanding and explanation of the meaning of Sacred Scripture, so that through preparatory study the judgment of the Church may mature. For all of what has been said about the way of interpreting Scripture is subject finally to the judgment of the Church, which carries out the divine commission and ministry of guarding and interpreting the word of God.

In the years following Vatican II, the Council’s approval of historical-critical interpretation led to an explosion of Catholic Biblical scholarship. This has greatly enriched our understanding of Scripture. But conventional historical-critical scholarship is not well adapted to fulfilling the second aspect of Biblical interpretation called for by the Council: attention to the whole meaning of Scripture and particularly to the function of Scripture within the “living tradition of the Church.” The “canonical criticism” of the Old Testament pioneered by Brevard Childs is a really healthy and welcome development within Biblical scholarship. But for the New Testament–and indeed for the Christian Bible as a complete canonical collection–canonical criticism must include attention to the interpretations of the Church Fathers and the way the canon of Scripture functioned for them.

Unfortunately, a lot of Catholic Biblical scholarship seems quite content with a “literal” sense of Scripture that does not support the teaching of the Church. Many scholars seem to see this as totally fine. After all, Catholics don’t believe in sola scriptura. It’s possible for us to say “this doctrine is not taught by the literal sense of Scripture but we believe in it based on Tradition.”

Ironically, this common post-Vatican II approach widens the gap between Scripture and Catholic theology which Vatican II endeavored to close. It’s no secret (though many apologists try to explain it away) that for centuries (from the late Middle Ages until the 19th century) the Church tended to take a rather dim view of laypeople reading Scripture. Catholic theology and devotion was, of course, always deeply rooted in Scripture, but often in a rather indirect way. And for laypeople it was mediated by layers of interpretation and selection, more often than not.

Vatican II reaffirmed that Scripture should be accessible to the whole people of God. It stressed the Scriptural roots of Catholic theology. And yet, ironically, by opening the door to historical criticism it also provided a new way in which Scripture became inaccessible to ordinary laypeople.

It is a noble thing to take the original context of Scripture seriously. But the line between the most probable meaning of Scripture to its original authors/readers and a meaning that is relevant to us in our very different contest is not always a direct or easy one.

From alienation to application

FDI’s posts dramatize this repeatedly. He’s a big fan of the “Context Group” of Biblical scholars who have very specific ideas about just how our understanding of ancient Mediterranean culture should shape our interpretation of Scripture. These scholars’ interpretations are not always shared by other historical critics, so shouldn’t be taken as identical with historical criticism as a whole. But the issues they raise are certainly issues that anyone who takes the historical study of Scripture must face.

FDI is fond of translations of NT terms that create a kind of “alienation effect” reminding us how alien the world of Jesus was: “sky vault” instead of “heaven” and so on. The question is: where does this go for us theologically and spiritually? Does it lead to an enriched understanding of our faith or does it simply lead us to feel that the New Testament world is so alien that it has nothing to say to us?

Obviously FDI doesn’t think the latter. But I confess that reading his posts I find it hard to tell at times just how he goes about reconciling his understanding of Scripture with Catholic faith. At times he seems to be saying that our faith has gone in a different direction than the Scriptural text would indicate and that’s fine. At other times, as in his most recent post on holiness, he’s clearly calling us to take the ancient understanding more seriously and allow our modern Western perspective to be modified. (In this case, to be more open to the possibility of “altered states of consciousness.”) I find FDI’s posts challenging and often illuminating, and I don’t question his deep Catholic faith for an instant. But I’d like to see a more sustained account of how theology and Biblical interpretation (as he understands it) are connected.

My own view has been for many years that we need a revived appreciation of the traditional “fourfold method” of Biblical interpretation. What FDI disdains as “allegory gone wild” I see as, on the whole, a fruitful and appropriate method of interpreting Scripture, into which the insights of modern historical scholarship need to be integrated. 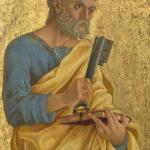 August 23, 2020
Standing on the Promises: Why Catholics believe Peter is the Rock
Next Post