The Cost of Discipleship, Bob Fu, and “God’s Double Agent”

Theologian Dietrich Bonhoeffer once spoke of the phenomenon of “cheap grace” and contrasted it with costly discipleship. Cheap grace refers to those who claim to be Christian, but make no significant life changes as a result of their faith. They reap all the benefits of society and see faith as going along with the prevailing social order. Costly discipleship involves our willingness to take a stand for our faith even if we suffer for it. 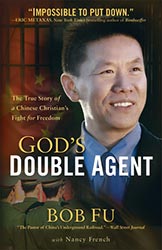 Bob Fu’s God’s Double Agent, written with Nancy Anderson French, is a testimony to costly discipleship, which inspires persons to risk their lives for the good news of Jesus Christ. Fu is beaten, imprisoned, and must leave his country as a result of his uncompromising faith in Jesus Christ. He is one of millions who are still at risk, in China, Pakistan, Egypt, and Syria, as a result of their witness to Jesus. Christianity can mean imprisonment and death, and churches are bombed and burned, even as I write.

Thomas Merton once titled a book, Conjectures of a Guilty Bystander. In many ways, this is my state of mind as I ponder, as a privileged American, the sacrifices many Christians and persons of other faiths suffer at the hands of oppressive regimes. I am grateful for the religious freedom I experience as an American Christian. More than that, I experience many benefits from my personal faith and professional life. While I am not eager to give this up, as a pastor I receive a housing allowance, which is exempt from federal and, in most states, state income taxes. Although my profession as pastor occasionally inspires critical comments from persons who assume I stand for everything they hate about Christianity, in my village on Cape Cod I receive universal respect, and as part of my commitment to raise the congregation’s mission to the area, I introduce myself as “Pastor of South Congregational Church” without fear of reprisal. As a matter of fact, I am usually met with approving comments.

It is good to be a Christian in the USA – tax benefits, non-profit status, even political benefits, can accrue from our faith as Christian. There are even business organizations like the Christian Yellow Pages and Christian Mingle that financially profit catering to Christian clients. Candidates parade their brand of Christianity as an implicit qualification for the Presidency, while remaining silent when their followers implicitly or explicitly question the faith of both Mitt Romney and Barack Obama, whose decency as persons and personal faith is obvious for those who go beyond faith stereotypes.

As I read Bob Fu’s testimony, I wonder if I would have the courage that he and his wife demonstrated in responding to the draconian tactics of the Chinese government. I doubt that I will ever experience martyrdom, but perhaps I can discover ways to walk more fully in the way of Jesus. There is still great wisdom in Charles Sheldon’s In His Steps, which asked the question, “What Would Jesus Do?” This question has both personal and political dimensions. In the political realm, it challenges as citizens and as a country us to sacrifice on behalf of the greater good, even if this means higher taxes and a degree of inconvenience, to ensure (by whatever means is most effective) quality education, housing, and health care for all USA citizens. It means a changed lifestyle, non-consumerist in orientation, that encourages sustainability – living simply so others can simply live – both in terms of the survival of our fellow humans and the planet’s ecosystem. Others, more conservative in their approach to government, may take a different approach from me. I recognize their fidelity to Christ and their right to follow other sacrificial paths that take us beyond self-interest to care for the larger whole.

Following Jesus’ pathway means looking beyond self-interest to see Christ in the stranger and the vulnerable and be willing to sacrifice time, talent, and treasure for their well-being.

It may also mean going beyond the red and blue divide in politics and religion to support the religious freedom of people whose theologies and faith experiences are foreign to us. Conservative Christians may need to make common cause and speak on behalf of Tibetan Buddhists and Falun Gong. Progressive Christians like me need to support oppressed evangelicals in China and competent homeschoolers in the USA. Faithful Christians in the last election, despite their political positions, were called as I was to support Mitt Romney’s devotion to his faith as well as combat challenges to Barack Obama’s Christianity. We need to go beyond ideology, cross the street, and provide personal, congregational, and political support for religious and ideological “others.”

None of these may require anything resembling the sacrifices made by Bob Fu and countless Christians in China and elsewhere. He has my respect as a brother in Christ. But, we need to be willing to follow Jesus, “grow in wisdom and stature,” and have the spaciousness of spirit to honor others as we let go of our prerogatives for the greater good of our communities and the planet.

I am grateful to Bob Fu and Nancy Anderson French for their honest and challenging text. They inspire me to widen my circle of concern to embrace religious “others” facing persecution and to speak regularly to our national representatives, urging them to support the religious rights of persons everywhere. 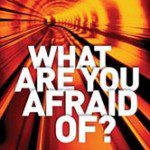 September 30, 2013
Illness and Aging as Spiritual Issues: A Response to David Jeremiah’s What Are You Afraid Of?
Next Post

September 30, 2013 The Adventurous Lectionary for October 6, 2013: Aiming High!
Recent Comments
0 | Leave a Comment
"Unfortunately, your calendar and the Presbyterian calendar are one Sunday off from each other on ..."
gloria5 The Adventurous Lectionary – Twenty-Third Sunday ..."
"Aren't you the one living in an upper middle class town on Cape Cod? How ..."
Nixon is Lord The Fourth of July and Turning ..."
"Ubuntu? The non proprietary software, right?"
Nixon is Lord The Fourth of July and Turning ..."
"Sadly, what happens is then the flag becomes more important than the message, and “Christianity” ..."
Chris Stone Celebrating Interdependence Day: The Fourth of ..."
Browse Our Archives
get the latest updates from
Living A Holy Adventure
and the Patheos
Progressive Christian
Channel
POPULAR AT PATHEOS Progressive Christian
1

Progressive Christian
The Adventurous Lectionary - The Second Sunday of...
Living A Holy Adventure