The Adventurous Lectionary – The Fifth Sunday After Pentecost – July 14, 2019

Today’s readings are timely. Reports of unsafe and unsanitary conditions in border detention camps, separation of children from their parents, and the demonization of immigrants and asylum seekers by national leaders dominate the news. The nation is in danger of losing its soul as our leaders intentionally undermine environmental regulations, threaten massive roundups of long-term, law-abiding undocumented residents, and focus on short-term gain political and financial gain at the cost of the well-being of future generations. Such soul-destroying policies are condemned by God in this week’s lectionary readings.

The readings assert that God has a preferential option for the vulnerable and marginalized, and for those we disregard or pass by. God loves everyone, even the oppressor and the wealthy political leader, but God has a special care for the lost and forgotten, for those who are ground into dust by the machinations of business and government. For God, layoffs and foreclosures are never “just business.” Nor are immigration policies that traumatize children the cost of national security. Business and governmental policy is always personal and ethical because they shape the lives of people and the environment and are often rigged against the powerless. Powerful insiders have privilege whether in the court system or the stock market. Their children receive the “best” of life, while others simply struggle to survive.

God has a concern for the pain of the world – indeed God is “the fellow sufferer who understands” (Alfred North Whitehead), not as an observer, but from the inside – and God seeks to minimize preventable pain by working with our lives and our business and political structures to bring justice to the world. Despite individualistic interpretations of scripture favored in the USA, and especially by conservative Christians, the bible is through and through social and political in its ethics. Amos and the Psalmist are speaking directly to those in power, and Jesus’ words present a social critique and not just an individual call to action.

Amos challenges the powerful in politics, business, and religion to return to God by returning to God’s pathway of justice and care for the vulnerable. His words are harsh and the religious leaders of this theocratic system want to silence him. Few settled ministers can get away with the vitriol Amos dispenses. The religious leaders are angry at the prophet: they know deep down that they have benefited, like the wealthy landowners, by injustice. They have turned away from the poor, even if they haven’t directly perpetrated the injustices Amos decries. The religious leaders have failed to hear or have chosen to be oblivious to the cries of the poor and may even consciously benefit from injustice. But, God experiences the pain of the vulnerable, and eventually the scales of justice will be righted, and there will be hell to pay.

When the religious leaders, the rightful ethical voices in the community, try to silence Amos, he is consumed with righteous indignation and in words that should be labeled “PG for Violent Content,” he assures them that they and their families will be among the first to receive divine punishment. They will feel the pain that God and the oppressed feel when their own beloved families are decimated. Their neglect of the poor will come back to haunt them.

I am regularly chided on Facebook by conservative Christians who state that “biblical ethics have nothing with do with government, but they are a matter of personal relationships or the ethics of the church.” Obviously, these persons have never read Amos and the Hebraic prophets, whose primary targets are politicians, religious leaders, and business people, and the structural evils we take for granted or explicitly sanction. For the prophets, politics and religion exist interdependently: we exist in “one realm,” interdependent in nature, in which God seeks Shalom and abhors injustice. So, we must ask ourselves: What do the prophet’s words say about our economics and the imbalances of wealth and the inequities in our justice system? Are we not also “guilty bystanders” or even perpetrators of injustice by our inaction, lifestyle, or preferential options?

Psalm 82 picks up the same theme with a question directed to us as well as Israel’s religious leaders: “How long will you defend the unjust and show partiality to the wicked?” As the poor know, whether they are involved in business or in the court system, the odds are stacked against them. There was anger among the children of Israel and there is anger in the USA today. God’s prophets challenge us: “Defend the cause of the weak and the fatherless; maintain the rights of the poor and oppressed. Rescue the weak and needy; deliver them from the hand of the wicked.” These are political and economic issues. The unjust are often in the dark about their injustice and its consequences. Again, they benefit from the social order and believe that they are entitled to wealth and consideration. They do not directly observe the pain that results from their actions. God sees things differently. God is not just concerned with the pain of poor and neglected; God is concerned with the causes of poverty and neglect. The scales will be balanced and seeing the light will be painful as well as liberating.

The prayer of Colossians is that we live a life worthy of the Lord. While the early Christian movement had no political power, relations within the community are important and reflect our relationship with God. They are both moral and political, individual and communal. God is worshipped in actions as well as words. Doctrines mean little if they don’t shape our care for one another. While the author is not giving political and business counsel, like the Psalmist or Amos, his words still convict us. Do our political sensibilities and business practices lead to words and behaviors worthy of God? Do we say the right things, believe the right doctrines, and then in our citizenship find ourselves lured by prejudice, hate speech by politicians, hardheartedness toward the poor and refugee? Have we succumbed to self-interest in the political realm, while espousing love in individual relationships? What does it mean to live a life worthy of God in the ballot box and halls of Congress?

Jesus’ parable of the Good Samaritan is strongly political, too, and especially timely as our nation’s leaders detain, demonize, and traumatize immigrants and their children. The hero is a stranger, looked down upon by the good people of the community. In our xenophobic time, the Good Samaritans – our unexpected helpers – are the pilgrims from the South, undocumented residents who take care of our elderly parents, and DACA students seeking to live the American dream.

The parable does not condemn the religious leaders; it simply notes that they believed that they had better things to do than to help a wounded pilgrim. They were simply doing their duties and following the prescribed rules for their professions. The religious officials needed to preserve the status quo and ensure that the order of worship be followed by their presence. The Temple needed to be cared for and services led. Order needed to be maintained in the religious realm and this trumped the call of the moment, even if the call is to respond to obvious human need. Only a hated foreigner – an undocumented worker, a refugee, a person of the “wrong” race and sexual orientation – stops to help, and then gives generously. God not only hears the cries of the poor. God inspires the outsider to be our spiritual teacher. God is moving in the have nots as well as the haves. God’s providence inspires the stranger and maligned as well as the insider and “ethically pure.” God’s love embraces us all, but those who pause to listen to God’s call in the moment embody God’s vision in this time and place.

Today’s readings may leave many of us, including the preacher, with an uneasy conscience. They may convict us of our own preferential option for comfort and security over justice. They may challenge our own neglect, or avoidance of, the pain of the poor. When our senses are closed, when we justify business as usual, our hearts also close. How can we integrate self-interest with care for the broken and lost? How can we widen the scope of our well-being to include the well-being of others? How can we go from individual and national self-interest to world loyalty? This is more than optional generosity; God’s realm requires us to make structural changes that bring comfort to those in pain, power to the powerless, and justice to the oppressed.

+++
Bruce Epperly is a Cape Cod pastor, professor, and author of 50 books, including “One World: The Lord’s Prayer from a Process Perspective,” “Become Fire: Guideposts for Interspiritual Pilgrims,” and “The Mystic in You: Discovering a God-filled World.” 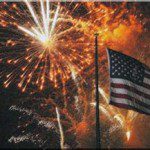 July 2, 2019
Celebrating Interdependence Day: The Fourth of July and the Lord’s Prayer
Next Post

Progressive Christian
The Adventurous Lectionary - The Fifth Sunday after...
Living A Holy Adventure