As of August 20, 2019, Greta Thunberg is seven days into her solar power voyage across from Sweden to New York. She chose to sail rather than fly as a sign of her commitment to respond to climate change, in good measure, caused by carbon emissions. No luxury yacht, Thunberg is traveling simply and purposefully on her zero-carbon vessel. Only sixteen, Greta Thunberg is an image of hope for many of us half a century older than her.

The world is on fire and Thunberg’s mission is to help put it out. The nations of the world have put profits ahead of the Prophets, who remind us that the Earth is our home, our mother, and our only life support. She is a prophet herself, young like Jeremiah, trying to wake her elders to the consequences of their decisions and reckoning that lies ahead if they fail to see the signs of the times. She is speaking, like Amos and Hosea, truth to power and trying to awaken the powerful to repent of their world-destroying machinations.

In my country, the USA, the current USA leadership is hell-bent on destruction: the USA has left the Paris Climate Accord, and is rolling back regulations on emissions and species protection, promoting fossil fuels, and eliminating climate science research in the Environmental Protection Agency. Going against the nature of the universe and every Christian ethical principle, we tout national individualism rather than planetary unity. Surely, in the spirit of Pogo’s commentary on the Vietnam War, we have met the enemy and it is “us.” We have become the destroyers and chaos makers and are doing it willfully while chanting the mantra “drill, baby, drill.” But the hoax is on us. For, as the bible says, the wisdom and power of leaders is foolishness, and the foolishness of a child shall lead us. If we listen to the foolishness of a teenager, a way may be made. We may save our souls as well as our planet.

In describing her adventure, Thunberg says her “hope [is] to increase awareness among people, to spread information and communicate the science about what is really going on so people can understand what is really going on with the climate and ecological crisis. That is what I am hoping to achieve with everything and that will also lead to international opinions so that people come together and put pressure on the people in power so that they will have to do something.”

The hopelessness and helplessness – the intentional destructiveness – of today’s political and business leaders is stunning. Though Thunberg doesn’t claim to have the answers, she – like the prophet Amos – knows we are in crisis and that means “all hands, on deck.” In less than twenty years – and perhaps sooner – as many suggest we will reach the point of no return for an aging generation of boomers, their children and grandchildren, and future generations of humans and non-humans. The world will never be the same, as seas rise, glaciers collapse, extreme weather and longer fire seasons become the norm, and flood and drought lead to government instability and migration.

I don’t know anything about Greta Thunberg’s spirituality or religious background. My internet search proved fruitless. But whether or not she believes in God, I know she is doing God’s work. In fact, I believe she is more in tune with God’s vision than America’s televangelists, prosperity gospelers, and second-coming salespeople. Unlike the second coming hucksters, she is describing a real apocalypse, the end of life as we know it, and not a fantasy rescue operation which denies human agency in shaping the future. She is standing at the door and knocking, trying to wake up the leaders of the world, inviting us to conversion of heart and lifestyle, and reminding us that every other ethical issue is moot if the earth becomes uninhabitable. May we have ears to hear, hearts to open, and hands to fulfill God’s call for us to be God’s companions in healing the Earth.

Sail forth, Greta, with the winds of the Spirit as your companions.
+++
Bruce Epperly is a Cape Cod pastor, professor, and author of over fifty books including “Become Fire: Guideposts for Interspiritual Pilgrims,” “The Mystic in You: Discovering a God-filled World,” “Praying with Process Theology: Spiritual Practices for Personal and Planetary Healing,” and “Spiritual Decluttering: 40 Days to Spiritual Transformation and Planetary Healing.”

Progressive Christian
The Adventurous Lectionary - The Sixth Sunday after...
Living A Holy Adventure 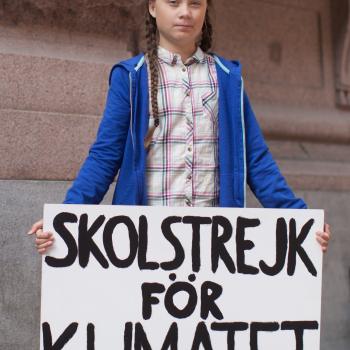