Our Love Must Make Us Strong: The Music and Mysticism of Loreena McKennitt

Our Love Must Make Us Strong: The Music and Mysticism of Loreena McKennitt May 7, 2020 Avellina Balestri

It all started one Christmas as I rummaged through the CD racks at the library, in search of seasonal music different than the usual run-of-the-mill jingles blared constantly on the radio from November onward. I had several holiday gigs lined up, and planned on singing “Coventry Carol” in an upcoming concert, so when I stumbled across a CD called “A Midwinter Night’s Dream” which included it in the track list, I immediately thrust it into my green library bag for check out. I thought little of it at the time, but this would start me on the road to a new musical fandom.

At home, I listened to the CDs I had gleaned, with some degree of disappointment since most were pretty common-place, and the Celtic-themed ones were generally too “Pop” for my tastes. While I certainly can appreciate artists such as Celtic Woman and Enya, their style always sounds a bit faux, like they have journeyed too far away from their roots and lost that magical connection with the past. But then I selected a “A Midwinter Night’s Dream”. The first track was “The Holly and the Ivy”, but it was different than any other version I had heard. The tune was altered, made deeper and more mysterious somehow. And then I heard the voice of the woman singing, so ethereal, so pure, so rich, so real. I looked on the CD cover for her name. It was Loreena McKennitt.

After I finished “A Midwinter Night’s Dream”, I tracked the other albums in her 9-disc collection: “The Wind That Shakes the Barley”, “The Book of Secrets”, “The Mask and Mirror”, “The Visit”, “An Ancient Muse”, “Elemental”, “Parallel Dreams”, and “To Drive the Cold Winter Away.” Needless to say, I became hooked, and was sad when there were no more of her CDs to order. I was even sadder that she hadn’t been hired to do some of the music for The Lord of the Rings, in addition to, or perhaps even instead of, Enya and Annie Lennox!

Meanwhile, I did some research on my new favorite musical artist, and discovered that she is a Canadian of Scottish and Irish descent. Not only does she produce truly gorgeous vocals, but she also plays the harp, keyboard, and accordion. In addition, she composes much of her own music and runs her own independent company called Quinlan Road. Starting her career in the 1970’s, rising to prominence in the 80’s and 90’s, and continuing in popularity to the present day, she is said to have created her own “genre” of Celtic/World music, moving generations of listeners across all sectors of society.

Although her life has been marked by many well-deserved successes, it has also been marred by terrible personal loss. Tragedy struck when both her fiancée and his brother were drowned while sailing on Georgian Bay. In their honor she has become an advocate of water-safety and water-rescue missions, and uses her high profile to help others in harm’s way. She has never married, and this, in some way, makes her something of an embodiment of the music she sings, about love, loss, and the never-ending journey we all share.

Loreena’s music touches on a multitude spiritual themes, emphasizing the elements of the human experience that bind us all together across time and space: our shared desire for true love, a place to call home, liberty from oppression, and communion with the Divine. Nevertheless, her works tend to stay broad in scope, addressing the plight of humanity while avoiding specific political skirmishing. Unlike some other Celtic singers, she does not succumb to musical clannishness, but uses her roots to branch out into new dimensions, realizing that the original Celts were migratory people and their story connects with many others.

Loreena often chooses classic poetry to set to music, bringing back forgotten literary gems to the popular consciousness. Many are drawn from the great romantic narrative tradition, such as “The Highwayman” by Alfred Noyes, “The Lady of Shalott” by Alfred Tennyson, and “The English Lady and the Knight” Sir Walter Scott. Others deal with the mysteries of nature such as “Snow” by Archibald Lampman, or the mysteries of death such as “Cymbeline” by William Shakespeare. Still others explore the meaning of love such as “The Two Trees” by William Butler Yeats, and others delve into the essence of human suffering such as “The Stolen Child”, also by Yeats.

Her choice of folk songs combines old standards with new vocal styles and a dynamic range of instruments from a variety of cultures and periods. Some involve unusual alterations to the melodies or phrasing, such as “The Holly and the Ivy”, “Star of the County Down”, and “Greensleeves.” Others are simply infused with new vigor through the sincerity of Loreena’s story-telling style, such “Annachie Gordon”, “As I Roved Out”, and “The Blacksmith.”

Her own compositions manage to keep faith with the older folk tradition while also being strikingly fresh and original. Some are veritable anthems for justice, such as “Breaking the Silence” and “Beneath a Phrygian Sky”, while others focus on the mysteries of human relationships and the ongoing journey of life such as “Penelope’s Song” and “The Never-Ending Road”. Her lyrical intuition matches her musical one, and she can almost be called a modern mystical poet in her spiritually thought-provoking pieces.

Loreena started life as a Canadian farm-girl, and although she has certainly become something of a Citizen of the World since then, her as an honorary colonel in the Royal Canadian Air Force shows her patriotism. As a musician, she has said that it is her desire to share always, and as a representative of the military, to share the gifts and perspectives that soldiers have to give to civilians, and at the same time share the gifts and perspectives that civilians have to give to the soldiers. Indeed, this attitude is very appropriate, since it embodies the calling of the bards of old, whose social duty was to bridge gaps and walk between the lines.

Her personal religious background is a bit of a mystery, and it is unclear whether she personally identifies as a practicing member of any tradition. Evidently her father was of Scottish Protestant and her mother of Irish Catholic stock, marrying two different strands of the Celtic Christian tradition, but she portrays herself as broadly spiritual in a way that is able to see the presence of the divine in all religions and cultural expressions. Her music demonstrates this belief often, drawing from a wide range of religious traditions and motifs, most notably Celtic Paganism, Catholicism, and Islam, which she has encountered first hand through her travels across the Eastern and Western worlds.

She seems to particularly relish overlapping religious references, such as in her songs “Mummer’s Dance” and “All Soul’s Night”, both of which highlight Pagan ceremonies that were given new Christian meanings upon the conversion of Europe, as well as “Full Circle” and “The Mystic’s Dream”, which draw from the Islamic tradition of Rumi and Hafez, and contrast it with their Christian counterparts in the west. Most strikingly perhaps, in this interplay of east and west, is her rendition of “God Rest Ye Merry, Gentleman”, a classic English carol performed with instruments from the Middle East. Indeed, it might be said her mission is to show us all that we have more in common in our human experience and divine encounter than where we differ, and that grace cannot be limited, but blows wherever it wills.

There are other more specifically Catholic-themed pieces of special significance to me in my own spiritual walk, such as “Skellig”, written by Loreena in honor of the Irish monks who saved civilization during the Dark Ages, and the incomparable “Dark Night of the Soul”, a deeply moving rendition of the mystical love poem to God written by St. John of the Cross. There are others that emphasize the depth of human emotion released through prayer and the eternal search for God, even in the depths of desolation and seeming god-forsaken, such as “Dante’s Prayer”, which again combines eastern and western styles by using imagery from an Italian Catholic poet off-set by the chanting of Russian Orthodox monks.

While no single religion may be able to claim Loreena for there own, I think there is no doubt that she is a deeply spiritually aware person, and has led others to search for God and the meaning of existence through her music. Indeed, some of called her a modern-day mystic, and see no reason to argue the point. Even her interviews seem to exude a certain peace of presence, as one who has found the flow of life in the now. Perhaps her own past sorrows and single vocation has made her a special instrument of empathy and embodiment of the songs and stories she weaves. She herself has said that she does view those who have been touched by her music as mere “fans”, but acknowledges that a much deeper connection between her and them has been forged.

For her willingness to share her God-given gifts with the rest of us, I for one will be eternally grateful. Indeed, there have been times of spiritual darkness in my own life, when I felt overwhelmed and excommunicated through the pangs of loss and the sense of abandonment, when just listening to her sing soothed my soul and brought out the tears I had been holding back for too long. There were times in my teen years I have lain on the floor in front of my CD player, and I felt as if grace had broken in upon my world and flooded me with a sense of purpose and resolve to struggle on through the most emotionally trying of circumstances.

I think the ultimate meaning behind the music of Loreena McKennitt is that, as she herself wrote in Beneath a Phrygian Sky, “our love must make us strong.” No matter what tribulations we may face, no matter what losses we may suffer, there is some undying hope that lingers in the soul that the intangible realities that are of most value will never be lost to us forever. Love will win out in the end, and no matter how long the roads we must take, and how hard the storms may rage, as Sir Walter Scott poetically put it, “love shall still be lord of all.” 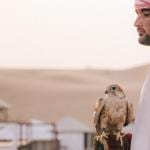 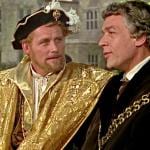 May 12, 2020 "A Man for All Seasons" Movie Review
Recent Comments
3,641 Comments | Leave a Comment
Browse Our Archives
get the latest from
Catholic
Sign up for our newsletter
POPULAR AT PATHEOS Catholic
1 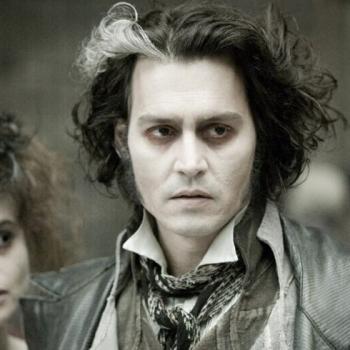 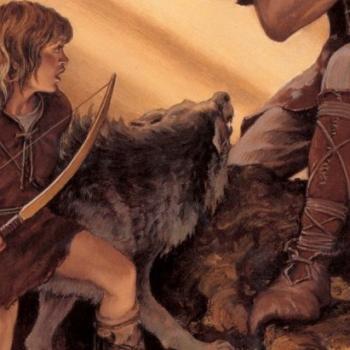 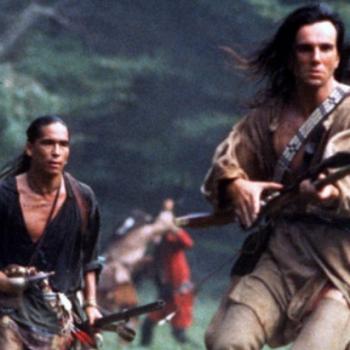 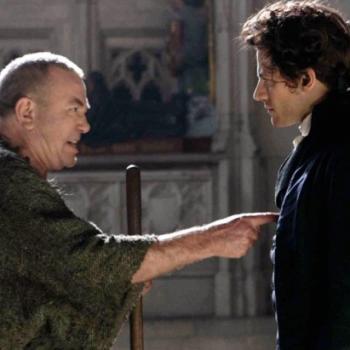 3,641 responses to “Our Love Must Make Us Strong: The Music and Mysticism of Loreena McKennitt”