Biblical Case for Freedom of Conscience

Attempts to preserve the fundamental rights of religious freedom and conscience have been met with scorn by many for different reasons. Some simply don’t understand the issue. Others refuse to accept the rights of religious people whose values leave no room for their sexual practices.  There are some Christians who, tired of “culture-warring,” seem eager to bend the knee to ideas and behaviors that conflict with biblical values.

What is religious freedom? How does it relate to conscience? Is it biblical or is it a notion with no basis in scripture, contrived by right wing religious radicals to serve selfish ends?

The debate over these issues is just beginning. It will affect the Church from within and without. We faithful Christians need to know what we believe and why. Below is the religious liberty section of the Manhattan Declaration, written by Princeton professor Robert George, Baptist theologian Timothy George, and evangelical ministry leader Charles Colson in 2009. These are complex ideas about which much has been written, but this is a fine place to start.

The Spirit of the Sovereign LORD is on me, because the LORD has anointed me to preach good news to the poor. He has sent me to bind up the brokenhearted, to proclaim freedom for the captives and release from darkness for the prisoners. Isaiah 61:1

The struggle for religious liberty across the centuries has been long and arduous, but it is not a novel idea or recent development. The nature of religious liberty is grounded in the character of God Himself, the God who is most fully known in the life and work of Jesus Christ. Determined to follow Jesus faithfully in life and death, the early Christians appealed to the manner in which the Incarnation had taken place: “Did God send Christ, as some suppose, as a tyrant brandishing fear and terror? Not so, but in gentleness and meekness…, for compulsion is no attribute of God” (Epistle to Diognetus 7.3-4). Thus the right to religious freedom has its foundation in the example of Christ Himself and in the very dignity of the human person created in the image of God—a dignity, as our founders proclaimed, inherent in every human, and knowable by all in the exercise of right reason. 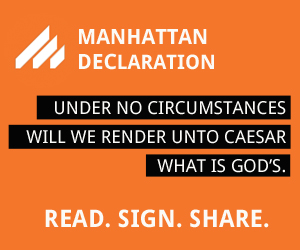 Christians confess that God alone is Lord of the conscience. Immunity from religious coercion is the cornerstone of an unconstrained conscience. No one should be compelled to embrace any religion against his will, nor should persons of faith be forbidden to worship God according to the dictates of conscience or to express freely and publicly their deeply held religious convictions. What is true for individuals applies to religious communities as well.

It is ironic that those who today assert a right to kill the unborn, aged and disabled and also a right to engage in immoral sexual practices, and even a right to have relationships integrated around these practices be recognized and blessed by law—such persons claiming these “rights” are very often in the vanguard of those who would trample upon the freedom of others to express their religious and moral commitments to the sanctity of life and to the dignity of marriage as the conjugal union of husband and wife.

We see this, for example, in the effort to weaken or eliminate conscience clauses, and therefore to compel pro-life institutions (including religiously affiliated hospitals and clinics), and pro-life physicians, surgeons, nurses, and other health care professionals, to refer for abortions and, in certain cases, even to perform or participate in abortions. We see it in the use of anti- discrimination statutes to force religious institutions, businesses, and service providers of various sorts to comply with activities they judge to be deeply immoral or go out of business. After the judicial imposition of “same-sex marriage” in Massachusetts, for example, Catholic Charities chose with great reluctance to end its century-long work of helping to place orphaned children in good homes rather than comply with a legal mandate that it place children in same-sex households in violation of Catholic moral teaching. In New Jersey, after the establishment of a quasi-marital “civil unions” scheme, a Methodist institution was stripped of its tax exempt status when it declined, as a matter of religious conscience, to permit a facility it owned and operated to be used for ceremonies blessing homosexual unions. In Canada and some European nations, Christian clergy have been prosecuted for preaching Biblical norms against the practice of homosexuality. New hate-crime laws in America raise the specter of the same practice here.

In recent decades a growing body of case law has paralleled the decline in respect for religious values in the media, the academy and political leadership, resulting in restrictions on the free exercise of religion. We view this as an ominous development, not only because of its threat to the individual liberty guaranteed to every person, regardless of his or her faith, but because the trend also threatens the common welfare and the culture of freedom on which our system of republican government is founded. Restrictions on the freedom of conscience or the ability to hire people of one’s own faith or conscientious moral convictions for religious institutions, for example, undermines the viability of the intermediate structures of society, the essential buffer against the  overweening authority of the state, resulting in the soft despotism Tocqueville so prophetically warned of. Disintegration of civil society is a prelude to tyranny.

As Christians, we take seriously the Biblical admonition to respect and obey those in authority. We believe in law and in the rule of law. We recognize the duty to comply with laws whether we happen to like them or not, unless the laws are gravely unjust or require those subject to them to do something unjust or otherwise immoral. The biblical purpose of law is to preserve order and serve justice and the common good; yet laws that are unjust—and especially laws that purport to compel citizens to do what is unjust—undermine the common good, rather than serve it.

Going back to the earliest days of the church, Christians have refused to compromise their proclamation of the gospel. In Acts 4, Peter and John were ordered to stop preaching. Their answer was, “Judge for yourselves whether it is right in God’s sight to obey you rather than God. For we cannot help speaking about what we have seen and heard.” Through the centuries, Christianity has taught that civil disobedience is not only permitted, but sometimes required. There is no more eloquent defense of the rights and duties of religious conscience than the one offered by Martin Luther King, Jr., in his Letter from a Birmingham Jail. Writing from an explicitly Christian perspective, and citing Christian writers such as Augustine and Aquinas, King taught that just laws elevate and ennoble human beings because they are rooted in the moral law whose ultimate source is God Himself. Unjust laws degrade human beings. Inasmuch as they can claim no authority beyond sheer human will, they lack any power to bind in conscience. King’s willingness to go to jail, rather than comply with legal injustice, was exemplary and inspiring.

Because we honor justice and the common good, we will not comply with any edict that purports to compel our institutions to participate in abortions, embryo-destructive research, assisted suicide and euthanasia, or any other anti-life act; nor will we bend to any rule purporting to force us to bless immoral sexual partnerships, treat them as marriages or the equivalent, or refrain from proclaiming the truth, as we know it, about morality and immorality and marriage and the family. We will fully and ungrudgingly render to Caesar what is Caesar’s. But under no circumstances will we render to Caesar what is God’s.

January 29, 2014
A Friend of Hobby Lobby, Conestoga Wood
Next Post

March 13, 2014 Who's Your Daddy?
Recent Comments
0 | Leave a Comment
Browse Our Archives
Related posts from The Manhattan Project

Evangelical
What the Bible says about Kim Davis
The Manhattan Project

Evangelical
Keeping an Eye on the CCCU
The Manhattan Project

Evangelical
The present evil age, and what you can...
The Manhattan Project
TRENDING AT PATHEOS Evangelical