Why I Support Rouhani

To a western reader it might seem strange that a strong radical atheist like me has devoted his political life in supporting the reformists, who are a faction of Islamic Republic, and not seculars. The answer can only be understood in the geopolitical situation of Iran, and the impression I have that the reformists are best for Iranian people, while the seculars are more interested in pursuing their own political agenda at the cost of ordinary people. Of course, all of my close friends and my parents are the same, they’re both atheists and reformists, and many people outside of Iran are also ideologically secular and politically reformist. And since there is too much misinformation about Rouhani’s administration on the web, so here’s my case in his defense. 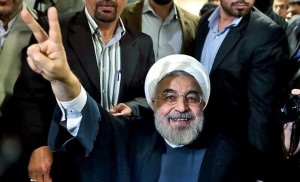 Iran is a country that’s on the brink of collapse and bankruptcy. If someone thinks that right now people are ready to rise up and topple the regime, they’re ignoring the possible cost of that. Iran can become a second Syria, but even worse in numbers and human toll, if a civil war breaks between the regime and the people. The disenfranchised minorities are very likely to start seceding or armed resistance, but they’re ignored by the opposition who’s rabidly nationalistic and Pan-Iranist. The sanctions have put more pressure on Iranians and they are effectively destroying the middle class. Inflation and recession are both rampant. If Iran is not already a failed state, it’s one step away from it. We need someone who can pull us back from the brink, and it’s not time for ideological differences.

Rouhani faces impossible obstacles. There’s a Supreme Leader, much more powerful than him, who monitors his every move and breath, and has pulled the leash already on several occasions. There’s a hardliner conservative parliament filled with regime goons. In the first six months of Rouhani’s administration they summoned his ministers to the parliament more than the eight years of Ahmadinejad, while Ahmadinejad was a president who openly defied the law. There’s a revolutionary guard which is also more powerful than Rouhani, willing to sabotage his every move. There’s a judiciary controlled by a hardliner conservative cleric who has imprisoned some of Rouhani’s supporters and has shut down many newspapers that supported him.

Rouhani’s modus operandi is that of a president, not of a political activist. He is someone who changes something essential and will compromise on other things. He is not a revolutionary who wants to turn the system upside down, he is a sane insider who wants to bring some stability and rationality into the way the system works, and that is precisely why he is a great president for what we need right now. No sane person would like him to wage a reform campaign. We want him to take the country away from a cliff.

I have noticed many changes in the country. To me, Rouhani has not only met the expectations so far, he has exceeded them. Many of them are small things you will never hear in international news; however, they affect us deeply. They include things like removing fundamentalist deans of universities, who are averse to science, student movements, freedom, and humanities. They include returning the economists to control the government. Government has taken control of the market again. The experts are running things and not people who have gotten the position solely because of their connection to the regime. Our culture minister criticizes censorship laws openly. Rouhani’s and Zarif’s presence on Facebook and Twitter is very significant symbolically.

My father was diagnosed with cancer. Because of Rouhani’s changes into the health care system, my father received free treatment. We couldn’t have afforded treatment if it had happened under Ahmadinejad.

The economic growth has moved from -6% to -2%. The inflation has dropped a bit. The currency markets are calm. The economy is not fixed in any sense, but improvements have been done.

In short, a sane, moderate team is handling the country. Rouhani has done much. I’m very satisfied with him.

I am certain Rouhani is sincere and honest. He is not a “wolf in sheep’s skin”. Rouhani himself is a top diplomat. He led the nuclear negotiations when Khatami was president, and he suspended enrichment. Iran and the West could have reached an agreement then, but Bush’s “axis of evil” speech caused Khamenei to step in and veto the process. He has been praised by people like Jack Straw who negotiated with him at that time. He was brought to power with a coalition of reformists, technocrats, moderate conservatives, and Green Movement activists, although I believe the Greens played the most significant role. We knew Rouhani. I’ve read his memoir. He’s an insider to the regime, but regime is not only bad people, and Rouhani is sincere. Rouhani wants to amend relations with the West, (United States particularly), he wants to resolve the nuclear issue and he wants a clean IAEA report on the table. And his foreign policy team is competent enough to pull this off.

But I believe the more rational assumption would be that Rouhani now has been given a chance to end the nuclear fiasco and restart the relations with the USA. I think for the time being, he is in control of the foreign policy. This means that the clock is ticking, and that Obama needs to seize this chance. It is now or never. If Rouhani cannot bring tangible results to Khamenei in a short time, his free run will come to an end. But for now, he is running things. But you have to remember that I have no inside access into the regime, I can only make educated guesses based on the signs. It’s entirely possible that I’m wrong.

Rouhani owes his presidency to us. Until a week before the election, Rouhani could not win the presidency in the first round. Then the Greens decided not to boycott the election, turned out, and he won. If he had not won in the first round, it’s very possible that he would face fraud in the second round. (There was talk of barring him some days before the vote). Also, if the reformist candidate, Aref, had not dropped out, he wouldn’t have won either. This was our victory. We repressed our grudges and our anger, we swallowed our tears, and with President Mousavi in our hearts, with our democratically elected president still under house arrest, we voted for Rouhani. Do not misread this story. Rouhani is a great man, but the main hero of this story is President Mousavi.

Yes, we could not remove Ahmadinejad and place our democratically elected president into the office. But we fought, for four years. We made life hell for the regime. If Khamenei let Rouhani get elected, it was because he feared the Greens pouring into the streets again. International sanctions and the economic crisis are two factors in the about-face of the regime, but a third factor is the culmination of the sacrifices of our political prisoners and those who died, and our leaders under the house arrest. That is why Rouhani owes his presidency even to those of us who continued to boycott the election.

Right now it is said that Mousavi’s and Karroubi’s case is referred to the National Security Agency, which is now headed by Ali Shamkhani, a moderate conservative, Khatami’s defense minister, who courageously defended the Green Movement at the time. If Mousavi and Karroubi are freed, and that seems more and more likely each day, not only Rouhani has made good on one of his most important campaign promises, he has enlisted the unconditional support of the greatest democratic movement in the history of Iran. Mousavi’s endorsement is the greatest investment Rouhani can make. Mousavi’s endorsement means legitimacy, moral superiority, and a passionate and loyal base that is ready to sacrifice anything.

Rouhani cannot free the political prisoners. He does not have that legal power. He cannot give us free press or completely free elections. He cannot stop the executions or tortures. He doesn’t have control over these issues. If he had, he would at least protect his closest allies, but he can’t. He’s there to save the country, with the least options available to him.

That’s why I support Rouhani.

March 1, 2014 I Dislike the Term "New Atheist". Here's Why.
Recent Comments
0 | Leave a Comment
Browse Our Archives
get the latest from
Nonreligious
Sign up for our newsletter
POPULAR AT PATHEOS Nonreligious
1

The Tower of Babel, Immigration, and...
A Tippling Philosopher
Related posts from On the Margin of Error