Book Review: “Beyond An Absence of Faith” 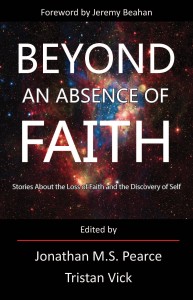 Beyond an Absence of Faith:  is an anthology of 16 accounts of atheists talking about their deconversion and struggle with religion. It’s been co-edited by Jonathan MS Pearce (who writes the blog The Tippling Philosopher) and Tristan Vick (who writes Advocatus Atheist) and our own Jeremy Beahan (of Reasonable Doubts) wrote a foreword to it. It also happens to be my number one favorite atheist book that I have ever read. In this review I want to explain why.

The Rainbow charts the movement of history over six decades in modes of traversing the land – from the coming of railways, through the tram and bicycle to motor car – but this actual landscape, despite its concrete, geographical importance to the novel, is ultimately subservient to a different topography, that of the inner life. Similarly, despite the closely worked-through time scheme of the novel, and the sociological exactitude of many of its references, these external points of reference are often subordinated to an individual’s own sense of change or of stagnation, however much they may be an inseparable part of their consciousness. Space, The Rainbow shows, exists both without and within.

And if we consider memoirs as literature (as we should), a great memoir can be the same. I’d argue that reading I Know Why the Caged Bird Sings is the best class for everyone to learn about racism, poverty, sexism, and rape, and also hope and empowerment, as all these issues affected one of the most poetic and observant souls of our time.

Which is why I love Beyond an Absence of Faith so much, more than any other atheist book I have read so far. Because it does the same thing for the ideas and concepts we in the atheist community struggle with. It shows them through multiple individuals. It’s a book about people and ideas, not only the ideas. It’s literature.

The need for such a book was long overdue. And I appreciate that it has arrived.

Jonthan himself (in his blogpost), and Tristan in the afterword of the book, say that this book is not meant as an argument against religion and that it’s not an overtly atheist book. Personally I think a book like this is much more atheistic than a straightforward argumentative book. Showing is much more effective than telling.

There are sixteen writers. All of them are equally eloquent and compelling, but they are different in all other aspects. And this is another great thing about the book.

So another thing to praise about the book is its polyphony. Each of these 16 individuals are a distinctive voice, and none of them can be overlooked. Reading all of them you really do have a much deeper understanding of atheism, of people struggling with atheism, of people.

Also, I want to commend the editors for including ex-Muslim voices. These voices are authentic and cover all aspects. I’m very pleased with representation of ex-Muslims in this book.

I don’t want to get to the specifics, because I’d like you to read the book for yourself. But I’ll say that my two most favorites were “Saleha M.” and “Alicia Norman”. Or these two moved me the most. If I could I’d adapt them into a film.

PS. I’ve been involved with Islam all my life and didn’t know wearing your trousers above your ankle is a thing. Weird!

Here you can buy the book:

May 19, 2014 The Real Benghazi Scandal
Recent Comments
0 | Leave a Comment
"Excellent thank youhttps://robeka.ir/"
Robekair Tafrihi The Sin of Joy
"Long time no post. I hope you're safe..."
Raging Bee My Pronoun is U: My Life ..."
"Kaveh, I really miss seeing your posts on facebook. Went looking for you, only to ..."
Matthew Ryan My Pronoun is U: My Life ..."
"If you want to play a game you can install free bubble shooter games if ..."
bubbleshort1 Yes, Khomeini Has Really Endorsed Pedophilia
Browse Our Archives
get the latest from
On the Margin of Error
Sign up for our newsletter
POPULAR AT PATHEOS Nonreligious
1