How to Write the Most Unlikable Atheist for TV

So I came across this post on the Friendly Atheist. It includes this image. 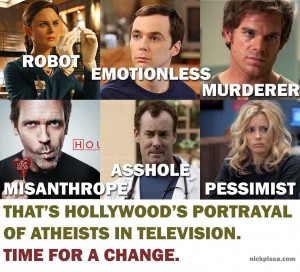 This is such a fundamental misunderstanding of storytelling. These are interesting, likable characters. Dexter Morgan and Sheldon Cooper are so interesting that they carry the weight of their otherwise poorly executed stories on their shoulders.

Let’s ignore for a fact that being robot or a misanthrope or a pessimist is not even a flaw. Let’s ignore that the positive characteristics of all these characters except Dexter is much more than their flaws. They’re intelligent and witty and independent. Let’s think what should be done to satisfy the person who made this image.

Let’s imagine that you have written an atheist character who is completely flawless. She fits to the society. She’s nice to everyone. It is a human being, with abundance of emotions, is a pacifist, loves humans as much as butterflies, and speaks in inspirational quotes photopshopped over the image of a scenery. Congratulations, you have created a character with no literary worth, whom the viewers will wish to violently die in every episode. You have managed to deconvert Mary Sue. She’s boring, and serves no point.

These characters are likable, interesting, and greatly written in spite of their flaws, but because of them.

Because the engine of a story is conflict. Conflict makes things interesting. Internal conflict is better. Flaws create conflict. No one likes to watch 8 seasons of a perfectly adjusted doctor who treats patient for the same reason you don’t go to a great hospital for entertainment.

Plus, such conflicts open a window to our own flaws, to how humans work. They provide insight. They are what makes literature valuable.

And you know the other fundamental misunderstanding is to treat characters as representatives of demographics rather than individuals. There are types, and works that deal with types. But great characters are individuals and should not be generalized into statements about atheists as a whole.

Literature and arts are not propaganda. They aren’t meant to advertise atheists or any other groups. They should be interesting and insightful, and they should be challenging and take you out of your comfort zone.

The last time we had a literary movement dedicated to praising an atheist and portraying him as flawless that atheist was Joseph Stalin and the movement was Socialist Realism. Nobody studies that movement for literary reasons now.

May 22, 2014
How Kurosawa Inspired Star Wars, and Why Movie History Is Awesome
Next Post

May 23, 2014 Islamic Identity vs. Persian Identity in Iran, and Why I Reject Both
Recent Comments
0 | Leave a Comment
"both sides are corrupted and nobody has the right to tell another how to vote."
Brianna LaPoint Dear Americans: Please Vote Democrat
"That's not what "native informant" means, though..."
ghostbun The Unbearable Toxicity of “Native Informant”
"You have my warmest wishes on your journey to self-realization. Love!"
Kaveh Mousavi My Pronoun is U: My Life ..."
""...if I were a westerner, I’m pretty sure I’d identify as non-binary."This line really hit ..."
Liz My Pronoun is U: My Life ..."
Browse Our Archives
Follow Us!

Christian school expels girl pictured with...
The Freethinker
Related posts from On the Margin of Error