No Justice for the Murdered Iranian Blogger August 8, 2014 Kaveh Mousavi

It was a while ago that news broke out that the Iranian blogger Sattar Beheshti was murdered under torture. 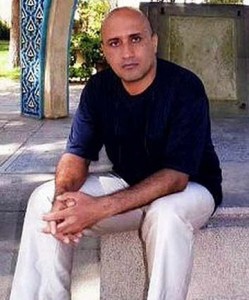 Sattar Beheshti (Persian: ستار بهشتی‎) was an Iranian blogger who died in early November 2012 several days after being arrested by the Iranian Cyber Police unit for criticizing the government of the Islamic Republic on Facebook, and after making a signed complaint of being tortured while in custody. His reported death has drawn international condemnation and led to the dismissal of the commander of Iran’s cybercrimes police unit.

His website “My Life for My Iran” at magalh91.blogspot.de was not a major blog, and had fewer than 30 viewers in October. But although he “was regarded as a relatively minor figure” among Iran’s bloggers, according to the New York Times, Beheshti’s death “has provoked outrage among both opponents and supporters of Iran’s leaders”.

On October 22, 2012, Beheshti posted a criticism of the Islamic Republic on his blog addressed to the Supreme Leader. Beheshti stated that the judicial system of the Islamic Republic was “nothing but a slaughterhouse,” and that “the sentences and … the executions carried out … were not out of a desire for justice – but were aimed at terrorizing the people! So that no one will complain!”

In a blog post a day before his arrest, Beheshti wrote: “They threatened me yesterday and said, ‘Your mother will soon wear black because you don’t shut your big mouth'”.

In comparison, Ahmad Zeidabadi, an esteemed journalist whose “crime” is “insulting the Supreme Leader”, has been convicted to 6 years in prison, 5 years in exile, and a lifetime ban on social and political activities.

August 8, 2014
On Harm, Truth, and Hegemonies: Another Response to Libby Anne
Next Post

August 12, 2014 For You the Flag Is Flung: Robin Williams (1951 - 2014)
Recent Comments
0 | Leave a Comment
Browse Our Archives
get the latest from
Nonreligious
Sign up for our newsletter
POPULAR AT PATHEOS Nonreligious
1