Rouhani’s Minister of Science Removed by the Parliament

Reza Faraji Dana, Rouhani’s minister of science, in charge of academia and science research, the most successful minister of Rouhani when it comes to implementing reforms in his own field, was impeached today, and he did not survive the impeachment, and was removed by the conservative Parliament of Iran. 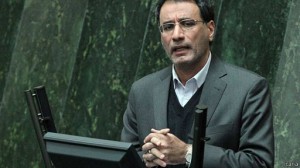 I have already covered his case on this blog before, his crime basically is expanding academic freedoms and creating a safe space for students. From that blogpost I repeat his “offenses”: (1) revealing about 3000 illegal scholarships rewarded by Ahmadinejad’s science ministry (2) his deputies who are famously reformists (3) hard liner fundamentalists removed as deans of different universities (4) allowing students who were fired because of political activism during to resume their studies (5) allowing university professors who were prematurely retired or fired for political reasons to resume teaching (6) allowing the faculty members to play a more significant role in electing the deans (7) reducing governmental intervention in academic and executive affairs of the universities considerably (8) delaying the process of Islamisation of the universities.

So yes, basically his crime was doing his job adequately. In Ayatollah’s Khamenei’s Iran and his Parliament of thugs they remove such a minister instead of rewarding him.

I watched the coverage live. Rouhani was supposed to come and defend him, and therefore he had asked for the date to be moved as he was supposed to be travelling today. The Parliament disagreed, and Rouhani didn’t come. I think this decision of his was entirely wrong, as his presence would definitely change the game, he really messed up his priorities here. Faraji Dana defended himself in the most conservative and amiable manner, stating again and again that the protests have decreased since 2009 in universities and universities are calm and that he would never defend someone opposed to the regime and similar lame defenses. He also defended his objective accomplishments but then again these people don’t care for progress or academic research. It was clear that he thinks he has a chance of surviving the votes and therefore he tries to appease to them. But he was wrong, the MPs are too extremist to care for such things. It would have been better if he had stood up firmly and defended himself as hotly as possible, then at least his removal would create some waves. I’m completely dissatisfied with how Rouhani administration handled this impeachment.

Iran’s previous reformist president, Mohammad Khatami, had faced the exact same procedure, as many of his more progressive and successful ministers were removed by the conservative Parliament.

All of this shows how difficult reform is, and how many obstacles Rouhani faces for true reform.

[UPDATE]:  Hassan Rouhani is already staging his counter attack. He has appointed Faraji Dana as his adviser on cultural and scientific matters, but most importantly he has appointed Mohammad Ali Najafi as the acting Minister of science. He is a very famous reformist, much more reformist than Faraji Dana himself, and he was already rejected by the Parliament when he was appointed as the acting Minister of Education. When he got another position in Iran’s cabinet, it angered conservatives a lot (and that wasn’t even a ministry). So basically, Rouhani is showing Parliament a middle finger. I’m happy that he doesn’t disappoint for long.

[Acting ministers can remain in the office for three months without Parliamentary approval].

August 21, 2014 Ideological Persecution Complex and Gambling on the Oppressed
Recent Comments
126 Comments | Leave a Comment
"I like it. so nice.https://bestkid.ir/%d8%a2%d..."
Mariam Why Trump Is a Potential Tyrant: ..."
"yes, you are right.I think so, that.https://bestkid.ir/%d8%aa%d..."
Mariam Iran students face expulsion from Norway ..."
"I use ir.thanks a lothttps://jalebamooz.com/mobi..."
Mariam The Sin of Joy
"Excellent thank youhttps://robeka.ir/"
Robekair Tafrihi The Sin of Joy
Browse Our Archives
get the latest from
Nonreligious
Sign up for our newsletter
POPULAR AT PATHEOS Nonreligious
1

Intentional Ministries: When Congregations Are Pastors'...
Roll to Disbelieve
Related posts from On the Margin of Error