Would I Pray to Make a Religious Person Happy? Hell No.

Would I Pray to Make a Religious Person Happy? Hell No. September 2, 2015 Kaveh Mousavi

When I was in high school, the first and the second year, every lunch break of mine was defined the same way. I refused to pray because I did not believe in Islam. The “guidance teacher” would come down to me, and would use every method to force me to pray. One thing I heard a lot was “Just pretend to pray! What would you lose? How would prayer harm you?”

This question –  “How would prayer harm you?” – has returned to me my entire life. Some people have had “heartwarming” reasons for me to do this “harmless” thing: you’ll make your relatives happy, and there’s always something wrong with them: they’re old, they’re sick, their heart will break, they love you, puppy eyes puppy eyes. Sometimes the more honest approach of threats was employed: we would fire you, beat you, stab you, and that would certainly harm you. 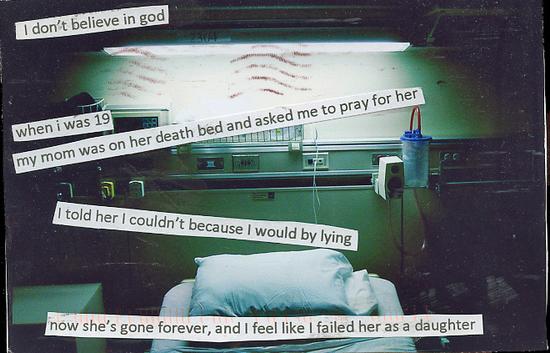 Which was originally posted on the site PostSecret.

Hemant asked “What would you do if your dying mother asked you to pray with her?”

And the consensus was, it won’t harm you. Commnenter after commenter said how it won’t harm you, and someone patted themselves and others on the back for proving how empathetic and awesome we atheists are, yay us, how much superior we are to the poor person in that confession.

Two of my colleagues wrote about this. Matthew Facciani was first. His approach was the “why not” approach. Galen Broaddus went with the nuanced approach. And here I present to you my decidedly less nuanced approach, the “fuck no and fuck you” approach.

So. How would prayer harm me, you ask?

Praying with a religious person would mean that I’m signalling the world that I’m one of them. And this has been my experience as an atheist my entire life: be one of us, if not, be like us. We’re all Muslims. No atheists in Iran. This has been what I’ve been combating my entire life.

Prayer is a complete denial of my identity. It’s adapting the symbolism of a system of thought which among its dogmas hold that I must be killed, that I’m on the same value as piss and shit (this is not an exaggeration, the list of unclean things in Islam really does include all three), and has marginalized me my entire life.

Prayer is an act I have refused to do and as a result I have been abused and lived a traumatized life. Prayer has always been the litmus test for Muslims to root out their enemies. When they take you to question your religiosity at work to decide whether you deserve employment or not they ask you about praying most of all.

So how would it harm me? By erasing me. By perpetuating my oppression. That’s how.

To me, if you love me, you love me as an atheist. If you are dying and you want me to pray, I won’t see you as a dying loved one, but as a dying oppressor, and I will only think that you’re using your death as emotional blackmail. I will never ask you to desert your religion for my sake, you will never ask me to partake in the rituals of a fascist ideology for your sake. Dying is not an adequate excuse for disrespecting people’s boundaries.

And it is that. Death takes the question to the extreme. But if you are unhappy that I’m an atheist, and me praying would “sooth” and “comfort” you, you’re a bigot, plain and simple. If the very thought of someone not praying is making you “uncomfortable” you’re a bigot. And if the process of dying has given you a brief power over these people and their emotional vulnerability at their time of grief, and you use that moment to finally see them pray, you’re a bigot.

And I never surrendered to you, my enemy, my oppressor, when you were the strongest and I was the weakest, as a lonely friendless teenager who thought he’s the only atheist in Iran I did not surrender, sure as hell I will not surrender when you are dying and at your weakest. You could not scare me into disappearance and you will not guilt me into it.

In religiously hegemonic countries, the best thing an atheist can do is to not exist. The second best thing is to exist in a manner that makes their existence invisible, like pray. I will never pray for any living or dying person because I refuse to become invisible. I’m an atheist, and I will make you accept it by refusing to act along and to respect your symbolism.

So, in summary, Q: “What would you do if your dying mother asked you to pray with her?”, A: “Fuck no and fuck you.”

Note: some of this is copied from comments I have left on other people’s blogs. 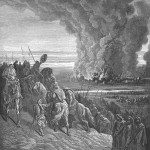 August 30, 2015
You Can't Wash the Blood from the Hands of Religion
Next Post 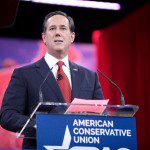 September 18, 2015 Rick Santorum is Factually Wrong about What Iranians Believe
Recent Comments
0 | Leave a Comment
"Excellent thank youhttps://robeka.ir/"
Robekair Tafrihi The Sin of Joy
"Long time no post. I hope you're safe..."
Raging Bee My Pronoun is U: My Life ..."
"Kaveh, I really miss seeing your posts on facebook. Went looking for you, only to ..."
Matthew Ryan My Pronoun is U: My Life ..."
"If you want to play a game you can install free bubble shooter games if ..."
bubbleshort1 Yes, Khomeini Has Really Endorsed Pedophilia
Browse Our Archives
get the latest from
On the Margin of Error
Sign up for our newsletter
POPULAR AT PATHEOS Nonreligious
1