So, your country has been recently or not so recently attacked and has been the victim of Islamic terrorism, and you are a politician or a candidate in an election who’s been asked about it, and you want to condemn those attacks, and show appropriate reaction without resorting into demonizing your country’s Muslim population, and you also want to avoid saying asinine things like “This ugly ideology is a perversion of the REAL Islam”? Do you want to create a balance between different factors without sounding off-base, either acting too macho or ignoring force at your own peril?

Well, be happy: I have created this template for you, you can fill in the specific parts and you have a statement that is not 100% useless. You’re welcome.

First of all, let me offer my sincere condolences and praises to the great people of [insert city name], especially the families and the loved ones of the victims, whose resilience is a great moral example for all of us. With their courage and steadfastness they proved that the terrorists have failed in obtaining their main goal: to instill fear into the hearts of people, to inspire despair. Ultimately, looking at the people of [insert city name], we come away with hope in midst of sorrow and tragedy. We will never forget the unjust death of people like [name one or two of the most relatable victims].

Secondly, let me tell you that I am a politician, not a theologian, therefore it is absurd to expect from me to weigh in on the ideological motives or consistency of these abhorrent people. What I do know, however, is that these people are by no means are representative of the Muslim community of our great country [insert the name of your great country], the vast majority of whom are sincere believers in democracy, tolerance, and freedom, also these criminals are merely a small minority of the international Muslim community, a minority so small that we could ignore them if not for the real danger of them.

In fact, we will not be able to slay the dragon of extremist terrorism without the help of our Muslim friends and allies. There needs to be, first of all, cooperation in the region of Middle East. We ask all Muslim majority countries to reconcile and recognize the fact that all countries need to prioritize the defeat of terrorism above all else, and also we invite all the world major countries from the USA to France to Russia to China to look beyond ephemeral differences and join an international coalition with the purpose of wiping terror off the map of the world, recognizing this common enemy of all humanity as the linchpin of our cooperation.

Thirdly, as [insert your job or the job you’re running for], I vow revenge. In defense of freedom and liberty, we come with an olive branch in our left hand for our allies, and a sword in the right one for the terrorists themselves. We are under no illusion about these people. We know we cannot negotiate with [insert the name of the responsible terrorist group]. Therefore, we vow to crush them in the battlefields, to kill them in the deserts and the caves, to annihilate them and restore peace to the regions under their ruthless rule. Our military response will be swift and decisive. We know that war is a tragedy, that every time we resort to the use of force, humanity has failed in obtaining peace through diplomacy. Yet we are not so naive to to think that war is always inevitable. Terrorism, unfortunately, is a problem that cannot be solved without the use of brute force.

Fourthly, we acknowledge the fact that brute force is not enough to solve the problem of terrorism. We need to quickly restore stability once the forces of evil are defeated, we may under no circumstances leave behind a vacuum. Restoring stability requires the establishment of a stable government, financial, medical, and otherwise humanitarian aid, robust diplomacy between all the players, and a reformist attitude that gradually pushes back the sectarian mentality and reduces discrimination. The political solution is as necessary as the military one, and it’s even more difficult. That is why I, as [insert your job or the job you’re running for], believe that an international coalition on this problem is paramount for achieving a real solution to this problem.

Finally, I end on this very important: We rely on our intelligence community and the police to protect us. And they have done an excellent job. We understand that tragedy is inevitable. In response to this tragedy, we will not resort to a police state, overreacting with unwarranted expansions of security measures. We will also not resort into vilifying our immigrant community. We realize that the solution to terrorism requires more bridges and fewer walls.

Thank you very much.

There, you now have the perfect statement. 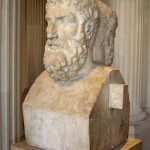 May 29, 2017
Epicurus Wants You To Stop Fearing Death, But He Is Not Convincing
Next Post

June 20, 2017 Why I signed the Pro-Truth Pledge (And You Should Too)
Recent Comments
0 | Leave a Comment
Browse Our Archives
get the latest from
Nonreligious
Sign up for our newsletter
POPULAR AT PATHEOS Nonreligious
1