Book Review: World Out of Balance

Book Thesis: The basic thesis of this book is that all the systemic constraints on the hegemon in a unipolar system as defined by different schools of international relations (realism, neo-realism, liberalism, and constructivism) do not apply to the United States, because the primacy of the United States is completely unprecedented and there is no empirical evidence suggesting that it can be constrained and therefore the U.S. will not soon lose its leadership position in the world. 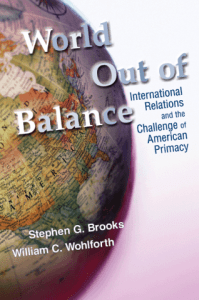 Book Summary: The book begins by saying that the unpopular foreign policy of George W. Bush created an atmosphere which led IR scholars to talk about the downfall of U.S. superpower and the constraints it was going to face. The book sets out to challenge this assumption (as mentioned in the thesis above). For this reason, the book begins by reviewing the constraints each IR school of thought defines and then shows how these constraints are actually not that convincing.

The first constraint the book defines is “balance of power”, as defined by realism. After defining these terms, the book shows why they don’t apply to the U.S. Counterbalancing is prohibitively costly for other nations, therefore they won’t attempt it in the near future. The capabilities are concentrated in the U.S. to such a high degree that is completely unprecedented in human history. The book illustrates this by showing statistics for defense expenditure, technology indicators, and distribution of economic and military capabilities. The book also mentions that balance of power theories predict the counterbalancing to prevent the rise of hegemon, but now it’s too late for the U.S., and have nothing to say about when a nation is already in that position. The book then compares the U.S. and China and finds it empirically impossible for China to catch up with the U.S. (mentioning only in GDP China is catching up, nowhere else). Authors argue that BOP and BOT theorists are too caught up in history, only saying it’s deterministic because it happened to previous superpowers, but they weren’t as powerful as U.S. is now, so their theory is lacking.

The book moves on to other balancing theories, i.e. “soft balancing” and “balance of threat”. The book argues that these theories make too many assumptions and interpret the data in their own favor, while the evidence doesn’t show that perceptions about the U.S. have changed. There are many explanations for the behavior of states other than BOT, such as economic interests, regional concerns, policy disputes, domestic incentives, and then moves to show the recent behaviors from Russia, France, Germany, etc is better explained by these alternatives.

Here the book moves from realism to liberalism and evaluates constraints of economic interdependence. The authors argue that economic interdependence constraints do not apply to the U.S. because of its outsize position in the global economy, and the degree to which other nations are dependent to it is larger than how dependent it is on other nations. The evidence the book uses to make this case includes foreign export markets, inwards and outward foreign direct investment, showing how state and non-state actors cannot leverage these against the U.S.

The next line of argument concerns the legitimacy constraint as argued by constructivism. While the authors agree that being considered legitimate is good for the U.S., they disagree that legitimacy constraint is systemic, but conditional, for three reasons: power can also shape legitimacy, the hegemon can rewrite the rules and therefore the relationship is very complex, and when a hegemon does break the rules, it can use its powers to minimize the costs.

The book ends by defining a new agenda both for IR discipline and U.S. foreign policy based on its conclusion. For IR, the book believes that the focus must change from systemic constraints on U.S. and instead focus on the real, conditional constraints such as nationalism, insurgency, nuclear proliferation and deterrence, and imperial overstretch. And the U.S. foreign policy, unlike what realists say, now has a real chance of reforming the international system to a better system.

Review: Overall, this book is very well written and argued. The structure is completely organized and it is very easy to read and understand the arguments. The book does a great job of providing its arguments in summary and then delving into evidence, giving the reader a fair chance to examine its arguments. Although the book sets out to challenge the theories in IR, it also does a great job of presenting those views and does not unfairly malign them. The book’s major strong point is its reliance on empirical evidence, hard data, and sound arguments, elevating it far beyond a book which merely focuses on theoretical conjectures. The passage of years have also provided more evidence to the arguments of the book, showing that even when the U.S.’s reputation has suffered (for example because of Trump’s presidency), its position in the unipolar system is unchallenged.

If one has to find some faults with the book, I’d number only three: (1) the book only focuses on main currents in IR, completely ignoring some theoretical traditions such as critical theory, Marxism, etc (2) In the last two chapters, especially the ones considering legitimacy, the book relies far less on empirical data and overall it’s less convincing than its previous cases on realism and liberalism, because it doesn’t seem to completely exhaust these issues, and (3) While the book defines quite a lofty project for American foreign policy, it shows no way or reasons why this project might be successful, or why it might be desirable, and this comes more as afterthought than a real argument.

Overall, a fantastic and exemplary academic work, challenging many assumptions by correct methodology. 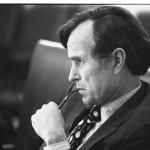 December 1, 2018 George H. W. Bush (1924-2018): An Example of Prudent Foreign Policy
Recent Comments
0 | Leave a Comment
Browse Our Archives
get the latest from
Nonreligious
Sign up for our newsletter
POPULAR AT PATHEOS Nonreligious
1

The Flocks Still Don't Like Evangelism:...
Roll to Disbelieve
Related posts from On the Margin of Error