“We must transfer our anger to the brutalities of our time.” Howard Zinn dies at age 87

“We must transfer our anger to the brutalities of our time.” Howard Zinn dies at age 87 January 29, 2010 Mark Braverman 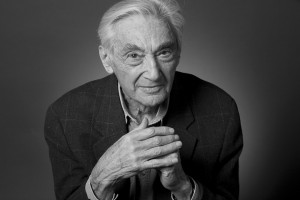 I graduated from Columbia in 1970.  Students had closed down the campus that Spring over the U.S. bombing of Cambodia.  Two years earlier the campus was in turmoil when students and faculty occupied several buildings in protest over the University’s plans to take over a chunk of the local neighborhood in upper Manhattan to build a gym. The President of Columbia had sent in NY riot police to break heads and drag out the protesters.  So when that President took the podium at our graduation, several hundred of us ceremoniously walked out and held a counter-commencement.  The speaker was Howard Zinn.

This week’s blog posting is a speech Zinn gave on October 10, 1999.  You won’t be able to stop reading until you reach the end.

Some years ago, when I was teaching at Boston University, I was asked by a Jewish group to give a talk on the Holocaust. I spoke that evening, but not about the Holocaust of World War II, not about the genocide of six million Jews. It was the mid-Eighties, and the United States government was supporting death squad governments in Central America, so I spoke of the deaths of hundreds of thousands of peasants in Guatemala and El Salvador, victims of American policy. My point was that the memory of the Jewish Holocaust should not be encircled by barbed wire, morally ghettoized, kept isolated from other genocides in history. It seemed to me that to remember what happened to Jews served no important purpose unless it aroused indignation, anger, action against all atrocities, anywhere in the world.

A few days later, in the campus newspaper, there was a letter from a faculty member who had heard me speak—a Jewish refugee who had left Europe for Argentina, and then the United States. He objected strenuously to my extending the moral issue from Jews in Europe in the 1940s to people in other parts of the world, in our time. The Holocaust was a sacred memory. It was a unique event, not to be compared to other events. He was outraged that, invited to speak on the Jewish Holocaust, I had chosen to speak about other matters.

I was reminded of this experience when I recently read a book by Peter Novick, THE HOLOCAUST IN AMERICAN LIFE. Novick’s starting point is the question: why, fifty years after the event, does the Holocaust play a more prominent role in this country—the Holocaust Museum in Washington, hundreds of Holocaust programs in schools—than it did in the first decades after the second World War? Surely at the core of the memory is a horror that should not be forgotten. But around that core, whose integrity needs no enhancement, there has grown up an industry of memorialists who have labored to keep that memory alive for purposes of their own.

Some Jews have used the Holocaust as a way of preserving a unique identity, which they see threatened by intermarriage and assimilation. Zionists have used the Holocaust, since the 1967 war, to justify further Israeli expansion into Palestinian land, and to build support for a beleaguered Israel (more beleaguered, as David Ben-Gurion had predicted, once it occupied the West Bank and Gaza). And non-Jewish politicians have used the Holocaust to build political support among the numerically small but influential Jewish voters—note the solemn pronouncements of Presidents wearing yarmulkas to underline their anguished sympathy.

I would never have become a historian if I thought that it would become my professional duty to go into the past and never emerge, to study long-gone events and remember them only for their uniqueness, not connecting them to events going on in my time. If the Holocaust was to have any meaning, I thought, we must transfer our anger to the brutalities of our time. We must atone for our allowing the Jewish Holocaust to happen by refusing to allow similar atrocities to take place now—yes, to use the Day of Atonement not to pray for the dead but to act for the living, to rescue those about to die.

When Jews turn inward to concentrate on their own history, and look away from the ordeal of others, they are, with terrible irony, doing exactly what the rest of the world did in allowing the genocide to happen. There were shameful moments, travesties of Jewish humanism, as when Jewish organizations lobbied against a Congressional recognition of the Armenian Holocaust of 1915 on the ground that it diluted the memory of the Jewish Holocaust. Or when the designers of the Holocaust Museum dropped the idea of mentioning the Armenian genocide after lobbying by the Israeli government. (Turkey was the only Moslem government with which Israel had diplomatic relations.)

Another such moment came when Elie Wiesel, chair of President Carter’s Commission on the Holocaust, refused to include in a description of the Holocaust Hitler’s killing of millions of non-Jews. That would be, he said, to falsify the reality in the name of misguided universalism. Novick quotes Wiesel as saying They are stealing the Holocaust from us. As a result the Holocaust Museum gave only passing attention to the five million or more non-Jews who died in the Nazi camps. To build a wall around the uniqueness of the Jewish Holocaust is to abandon the idea that humankind is all one, that we are all, of whatever color, nationality, religion, deserving of equal rights to life, liberty, and the pursuit of happiness. What happened to the Jews under Hitler is unique in its details but it shares universal characteristics with many other events in human history: the Atlantic slave trade, the genocide against native Americans, the injuries and deaths to millions of working people, victims of the capitalist ethos that put profit before human life.

In recent years, while paying more and more homage to the Holocaust as a central symbol of man’s cruelty to man, we have, by silence and inaction, collaborated in an endless chain of cruelties. Hiroshima and My Lai are the most dramatic symbols—and did we hear from Wiesel and other keepers of the Holocaust flame outrage against those atrocities? Countee Cullen once wrote, in his poem Scottsboro, Too, Is Worth Its Song (after the sentencing to death of the Scottsboro Boys): Surely, I said/ Now will the poets sing/ But they have raised no cry/I wonder why.

There have been the massacres of Rwanda, and the starvation in Somalia, with our government watching and doing nothing. There were the death squads in Latin America, and the decimation of the population of East Timor, with our government actively collaborating. Our church-going Christian presidents, so pious in their references to the genocide against the Jews, kept supplying the instruments of death to the perpetrators of other genocides.

True there are some horrors which seem beyond our powers. But there is an ongoing atrocity which is within our power to bring to an end. Novick points to it, and physician-anthropologist Paul Farmer describes it in detail in his remarkable new book INFECTIONS AND INEQUALITIES. That is: the deaths of ten million children all over the world who die every year of malnutrition and preventable diseases. The World Health Organization estimates three million people died last year of tuberculosis, which is preventable and curable, as Farmer has proved in his medical work in Haiti. With a small portion of our military budget we could wipe out tuberculosis.

The point of all this is not to diminish the experience of the Jewish Holocaust, but to enlarge it. For Jews it means to reclaim the tradition of Jewish universal humanism against an Israel-centered nationalism. Or, as Novick puts it, to go back to that larger social consciousness that was the hallmark of the American Jewry of my youth. That larger consciousness was displayed in recent years by those Israelis who protested the beating of Palestinians in the Intifada, who demonstrated against the invasion of Lebanon.

For others—whether Armenians or Native Americans or Africans or Bosnians or whatever—it means to use their own bloody histories, not to set themselves against others, but to create a larger solidarity against the holders of wealth and power, the perpetrators and ongoing horrors of our time.

The Holocaust might serve a powerful purpose if it led us to think of the world today as wartime Germany—where millions die while the rest of the population obediently goes about its business. It is a frightening thought that the Nazis, in defeat, were victorious: today Germany, tomorrow the world. That is, until we withdraw our obedience.

Jewish
BDS the End of Israel? A Jewish and...
The Politics of Hope