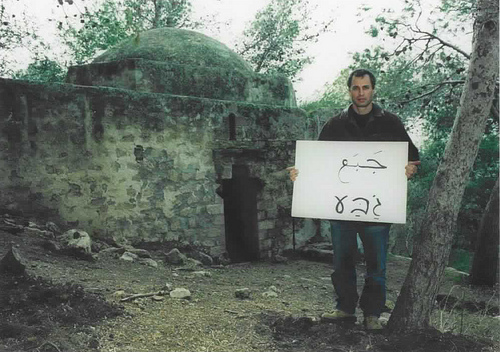 It’s been months since you’ve heard from me. This has not been for want of things to write about. In fact I have been writing quite a bit, and it’s been the demands of these projects and time on the road lecturing that have kept me from the blog. These two pieces just came my way, and have broken through the block.

I am bringing you two Jewish voices from Israel. One is a cry of despair and pain. The other is the story of a man who years ago woke up and set out to do something. I am not saying that in the writing of the first piece the author has not done something. Amnon Dankner, a veteran Israeli journalist, a man of my generation, born in the heady years just before the birth of the state and  part of the mainstream political and journalistic life of Israel, is now crushingly disillusioned, horrified, and in mourning. I am very moved by this piece. There is no light here, no sense from Dankner that he can even turn it around. It is a cry of despair, sadness, anger, and fear. What is striking also is his description of Israeli’s existential terror – the sense of being surrounded, isolated, threatened.  In the political ferment in which we engage around this conflict, we rarely hear this expressed by Israelis themselves, rarely hear about this sense of vulnerability outside the context of a Zionist polemic. Here is an Israeli expressing the desperate feeling of being at the mercy of a government not only unable to protect its citizens, but leading them at breakneck speed toward the edge of the cliff. We are not safe, he is saying — and, what is more, there is a way to safety, but it is in the opposite direction than the one in which we are travelling. Dankner goes on to voice the pain of a man living in a society that is morally bankrupt and descending rapidly into racism. This man was born in Palestine in 1946. He grew up immersed in the dream of redemption, of a talented, brave, suffering people creating something new and wonderful. It is a profound, tragic downfall. And so very sad. I will not choose to use this opportunity to preach about how such a downfall was inevitable because of the nature of Zionism itself  (this will be reserved for the next posting, in preparation). I simply give you Dankner’s profound unburdening.

Eitan Bronstein, born almost a generation after Dankner, is in my view one of the most courageous voices in Israel today. In founding Zochrot, he, along with Israeli historians such as Ilan Pappe, is calling on Jews to wake up to an essential facet of our history – the historical and ongoing dispossession of the Palestinian people to make way for the Jewish state. In this piece, Eitan makes his farewell as Director of Zochrot and tells the story of its founding.

Here are the two pieces:

“…I am daring to stand up and voice an opinion and even voice it loudly and pound on the table once or twice—this is because I have felt lately that it has become shameful to be an Israeli, and a decent person must feel this shame and blush deeply and clear his throat and whisper to himself the question, what should we do, what should we do, for heaven’s sake, and perhaps even reach far-reaching conclusions.

Because it is fairly clear already that if our life here continues as it has been developing, then decent, moderate, balanced and humane people will not be able to live here. Before our eyes, with growing speed, Israeli society is changing, the political culture is changing, balances are disrupted and checks are tossed to the blazes, in the terrible wind that is blowing in our lives and quickly colouring them in darkening shades of black….” (click for entire piece)

“…I started Zochrot more than nine years ago, after leading tours to the site known in Israrel as “Canada Park.” The JNF, with the generous assistance of Canadian Zionists, planted thousands of trees to create a forest that looked as if it were European, and in doing so covered the remains of the villages of Yalu, ‘Imwas and Beit Nuba. The JNF erected many signs in the park, describing the many histories of the location, but for some reason forget to mention the lives that Palestinians led here for hundreds of years, until the 1967 war, during which Israel completed the conquest of the country which it had begun in 1948. At the end of one of those tours, I had the idea to erect in the park the signs that were missing. For example, “’Imwas cemetery,” or “Yalu cemetery.”

The idea of erecting signs wherever Palestinian villages had been demolished by Israel attracted and interested people, and two publications referred to it even before we’d actually done anything: HaKibbutz and Ha’aretz. The many responses from readers – most of them irate – made clear to me that this was a clearly-focused activity whose time had come…

I carried out my first symbolic actions, erecting Hebrew signs alongside the remains of Palestinian villages, during that day trip. I still remember how I had physically to overcome my body’s resistance to making that modest gesture. Here are those photographs, which haven’t been published before.  (click for entire piece)

February 9, 2011 Bursting the Bubble of “Liberal Zionism”
Recent Comments
12 Comments | Leave a Comment
Browse Our Archives
get the latest from
Best of Patheos
Sign up for our newsletter
POPULAR AT PATHEOS Jewish
1

A Sukkot Story for the Pandemic...
Seventy Faces of Torah
Related posts from The Politics of Hope

Jewish
BDS the End of Israel? A Jewish and...
The Politics of Hope