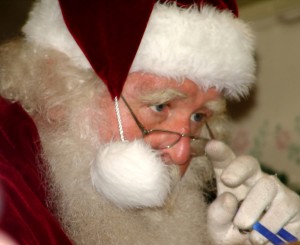 As a self-identified hippie, she had never intended to teach me about Santa—that wasn’t exactly in the spirit of the era. Besides, as a Jew, albeit a secular one, she didn’t want to tell me a lie that wasn’t even part of our tradition. Her idea that she could raise me without Santa Claus was, however, myth-taken. Children often come back from pre-school with contagious diseases. I brought back a belief in Santa. She decided it was harmless enough, so she played along with it. With a sigh, she brought me to the mall like all the other children.

But all that ended when I was sitting on Santa’s lap and noticed the gap between his cheap beard and his face. It was then that I realized he was a fraud. Alert the authorities! My mom remembers my indignation, though I seemed to hold her blameless. Perhaps I thought she had been deceived, as well.

She was impressed at the level of deductive reasoning in one so young. And since my belief in Santa wasn’t her doing in the first place, she had no incentive to continue the charade. My mom fessed up, but told me that I shouldn’t spoil it for my friends.

I’ve read that four is the age when children first develop the ability to detect deception. However, at that age it’s likely that most, if not all, of my friends still believed in Santa Claus. But years later, a nine-year-old friend confessed, in a whisper, that he didn’t believe in Santa anymore. “Please don’t tell my folks,” Leon implored. “I get more presents this way.” Assuming his parents didn’t suspect his deception, they probably thought it was sweet that Leon still believed. Such innocence…

Last week, Dale McGowan explained why the belief in Santa Claus can be an instructive tool for secular parents. It fosters critical thinking and can lead children to come to their own conclusions about God, as they cotton onto the obvious parallels with the Santa myth.

This week, Dale bemoaned the idea of prolonging belief in Santa after those doubts have developed. Such parents are undoubtedly misguided. Yet I can’t help wondering how many of them are actually being played by their little con men and con women in the making, as Leon’s parents were. Their children may be learning lessons of their own.

As for me, I can’t say that my revelation about Santa Claus had any relationship to my atheistic epiphany, which happened when I was 13 or 14. I think the habit of critical thinking my mom instilled in me had more to do with it. Indeed, I was the one who became an atheist first, after I suddenly realized my doubt had evaporated. And in a role reversal, I was the one who eventually convinced my mom to take the final step to atheism.

The sticking point was always, “What sparked the Big Bang?” Whenever my mom said that, I would shrug and ask, “And who made God?”

Some queries are easy to answer, like how Santa can be in all those malls at the same time. But being an atheist means becoming comfortable with unanswered questions. They’re not unknowable mysteries, as religions present. We may be able to understand them someday. But if not, that’s okay. 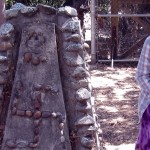 December 10, 2015 Riding the Hippocampus Hobby-Horse with Santa and the Coca-Cola Polar Bears
Recent Comments
0 | Leave a Comment
Browse Our Archives
Follow Us!

Satanist's Open Letter Reply to Trump's...
For Infernal Use Only
Related posts from Miracle Girl