At Sea in the Gulf of Understanding

At Sea in the Gulf of Understanding January 13, 2016 Stephanie Savage

Living with Religion, is how my essay “Sympathy for the Devil-Believers” is labeled in the latest issue of Free Inquiry. That’s somewhat ironic, considering the publication of the essay dredged up memories of a religious person with whom I couldn’t live—one of the very devil-believing fundamentalists referred to in the title.

In “Sympathy,” I argue that, to improve the image of atheists, we need to steal a leaf from the LGBT community and come out to our friends and family. By example, I use the same Christians whose kind support and well-meaning prayers I spoke of in my first Free Inquiry essay, “Without a Prayer of a Chance.” Their prayers were more for them than me, but their friendship and encouragement were invaluable during my grueling recovery from multiple strokes and a six-week coma.

My first clue that “Penny” was a creationist was in a comment she made on a popular mountain dulcimer website. She’s a fellow amateur player of the dulcimer. In a post, I mentioned that Keith has two forms of color-blindness. In reply, she implied that his affliction was caused by Original Sin.

And here I was thinking Keith was a throwback to our lemur-like primate ancestors…or at least his vision was.

The mountain dulcimer is a stringed instrument native to Appalachia. It therefore tends to attract Southerners. As products of their region, many of them are fundamentalists.

As a nonbeliever of Jewish heritage, who was raised without religion, I hadn’t had much interaction with evangelicals until I joined the mountain dulcimer community. I laid hints about my atheism by referring to myself as a “secular Jew,” but never officially “came out” because, to be honest, I wanted them to like me. I had good reason to believe that many of them wouldn’t due to ingrained biases against atheists.

That phenomenon is far from regional, of course. In “Sympathy,” I detail incidents of prejudice I’ve experience right here in Left Coast Southern California. And it doesn’t only come from Christians, either. The blurb quoted on the Free Inquiry website was from a fellow Jew I was dating until, in my typical too-frank manner, I laid the “A” bomb on him right there on our second date.

Yeah, I know, I shouldn’t count on a future career as a diplomat.

As my writing for the secular community expanded, I was outed by my own work. (I had been l out for a long time to friends and family.)

Penny and I had been interacting on a Facebook dulcimer group, but hadn’t friended each other. I had avoided it because of her creationism. Though she had lent me much support throughout my recovery, we had nothing in common beyond playing an obscure Appalachian folk instrument.

When I exited the site, Penny wrote that she was going to friend me, as long as I didn’t mind her Christian posts. I replied that I was okay with that, as long as she didn’t mind my skeptical posts. I found it amusing that we were both hanging back from friending each other for the same reason.

But we were right to be wary.

My timeline became a Noah’s Flood of Answers in Genesis (AiG) posts. In the past, I’ve spent hours reading AiG for amusement. To me, it’s an unintentionally funny creationist version of The Onion. So I watched the first post for fun. But when the cartoon “proof” of the impossibility of evolution ended, I laughed, then blocked the source.

If only it were as easy to get Ken Ham to go away.

Meanwhile, I created a public Facebook page in preparation for the publication of my Skeptical Inquirer article. When you create a public page, Facebook prompts you to invite your friends to like your page. I dutifully checked everyone on the list, including Penny. That was brainless.

Penny quickly became my personal creationist troll. Every time I posted about evolution, I received a torrent of AiG and other creationist links. I became privy to her brand of fundamentalist pretzel logic. To her, atheism is a “contradiction,” because according to the bible, humans can’t understand the ways of God.

Huh? Atheism is impossible because we can’t understand the mysteries of a god we don’t believe in? I’ve previously written about her contention that there’s no way to introduce new information into the genome. Mutations don’t count. Neither does chromosomal duplication.

It was clear that Penny didn’t realize that most self-identified skeptics are also nonbelievers. I eventually had to spell it out for her.

But that didn’t stop the disputations.

In a way, it was a fascinating peek into the mind of a hardcore Young Earth creationist. She told me that she had gotten a creationist church friend—who had confessed to being a closet Old Earther—to admit that his belief contradicted the bible (but not a mountain of well-established science).

I’m sure he wasn’t expecting the Spanish Inquisition at church.

But I dislike arguing with such people. I relish spirited debate, but there was no chance that I could convince her of some of the most fundamental tenets of modern science. And, certainly, there was even less chance that she would convince me to abandon all knowledge and reason to embrace her views (or even to believe that there was a god). That would take the kind of profound brain damage my doctors thought I had.

I find these kinds of conversations pointless and endlessly aggravating. I told her that that ad nauseum, but I kept being sucked in because Penny made such absurdly distorted and ignorant assertions about a subject I hold near and dear to my heart.

And all the while, I kept telling her to ignore these posts because they weren’t for her. (As I scrolled past her hateful anti-gay marriage posts.) For her part, she continued to harp that I was a skeptical inquirer about everything except evolution.

I patiently explained to her that skepticism doesn’t mean doubt about all claims. It only demands verifiable proof. And evolution is one of the most highly evidenced theories in all of science.

Since I didn’t grow up around believers, my exposure to them softened my own prejudices against them. But Penny was hardening my attitudes all over again, even as “Sympathy” was awaiting publication. She seemed to be almost deliberately undermining the premise of my essay.

Then, I posted a link about a visit to Ken Ham’s Creationism museum by a group of paleontologists. I found it amusing and shared it with my—at the time mostly potential—followers.

Penny dug up every creationist scientist she could find to prove that evolution wasn’t accepted by all scientists. They were the usual assortment of scientists in fields not involved with biology or deep time. She even mentioned Isaac Newton, who lived in an age when there were no credible alternatives to the  God hypothesis.

The conversation was exhausting, and I repeatedly begged her to stop if she valued our friendship. And she continued to tell me to stop writing these posts.

I wasn’t about to be silenced. Was that her ultimate goal?

No, as it turned out. When she again asked me to stop posting on her timeline, she phrased it in a way that made it obvious that she didn’t understand the way liking works on Facebook.

Suddenly, everything became clear. Penny didn’t realize that when she liked my public page, Facebook thought she wanted to read my posts. And every time we engaged in one of those battles, its algorithm bumped my posts to the top of her timeline because she seemed so keenly interested in them. 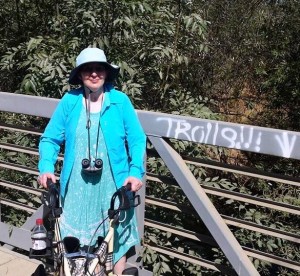 Penny thought I was being mean, taunting her because of her beliefs, which is the last thing I would do. To her, I was the troll.

I explained that I never should’ve asked her to like my page. But by that time, it was too late. She had already blocked me, the Darwinist troll.

I tried to contact her through a mutual dulcimer-player friend, but she wouldn’t even respond to him. I just wanted to let her know what had happened. After all, it was ultimately my fault, not for the posts, but for asking her to like my page in the first place.

To be honest, I don’t miss our friendship. I didn’t really like her that much to begin with. But I’m sad that things ended this way. I really did appreciate the support she provided me during my difficult recovery, which she continued to insist was a miracle.

Another point of contention.

In the end, I don’t think my Penny-dreadful drama contradicts my thesis in “Sympathy for the Devil-Believers.” I did learn to be more understanding of believers. Most are not like Penny, after all. And the less extreme of my Christian friends did in fact gain a new perspective on atheists after I came out to them.

Yet there are chasms so wide that they can never be spanned.

January 20, 2016 Isn't There Something in the Bible About Lying?
Recent Comments
0 | Leave a Comment
"The blog was absolutely fantastic! Lot of great information about how Music Therapy get you ..."
Monics Mery Music Therapy: Revealing Awareness and Awakening ..."
"Nixon didn't have the charisma that Trump does. So long as Republicans fear Trump's supporters, ..."
Nemo President Trump: Mimicking Nixon in More ..."
"does feal like that is the main diference between them, can anyone name any other ..."
noah johnson Lex Luthor is fiction, Donald Trump ..."
"Someone told me the internet in general has made people lose their compassion for other ..."
Brianna LaPoint Trolls: Warping the Internet into a ..."
Browse Our Archives
get the latest from
Nonreligious
Sign up for our newsletter
POPULAR AT PATHEOS Nonreligious
1