Message from a Time Before Creation

Deep within a cave in SW France about 170,500 years ago–some 164,500 years before the Great Big Genie in the Sky zapped the universe into existence, according to creationists–a group of early Neanderthals built ringed structures with piles of deliberately broken stalagmites.

Let that sink in. For perspective, Homo sapiens only evolved around 200,000 years ago.

Homo neanderthalensis, like the above statue, certainly has been shat upon since its discovery in the mid-1800s in the Neander valley of Germany. They were lumbering brutes barely smart enough to scratch their own asses. No wonder they went extinct.

Or, as Young Earth creationists continue to insist, they’re the remains of those wicked people their kindly god saw fit to slaughter en masse, including all their sinful little children.

Now sit in the corner and…DIE.

But lately, Neanderthals have enjoyed a PR makeover. They made jewelry, painted their bodies, and their diet was not strictly Paleo. Their brains were actually slightly larger than our own.

Of course there are plenty of paleoanthropologists who still argue that, while Neanderthals were far more sophisticated than previously thought, they weren’t quite up to our level. They were the C students of the Paleolithic.

I agree that the evidence suggests they didn’t have as wide a social and trading network as humans (I doubt the Paleo diet crowd would want to sup on the kind of meat this site has revealed). Shells from the Mediterranean have been found hundreds of miles away in Cro-Magnon sites, revealing an extensive trading network. This is not something found in Neanderthal sites.

Yet the evidence keeps evolving as new finds are uncovered. There were probably some cognitive differences that lent homo sapiens an advantage, but despite the countless theories we don’t–and perhaps can’t–know what they were. We’re left with only guesses.

Creationists have their holy writ filled with endless contradictions they ignore or explain away. When scientists find mysterious structures that hint at unexpected organization–perhaps even ritual–at a very early date, they scratch their heads and wonder.

But that’s what makes science so much fun.

(I found this video in a Cognitive Demons post on the same find. Thanks, Chris!) 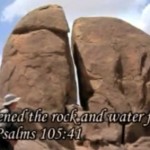