I like to joke that if someone had prayed to a beatified Catholic on my behalf during my six-week coma, that candidate would be on the fast-track to sainthood. But as an atheist, I naturally believe the only kind of miracle I experienced was of modern medicine. Yet that’s not what many theists believe. I’ve been told my recovery was a miracle so many times that I’ve joked I’m the only atheist who’s strengthened the faith of more believers than Richard Dawkins.

That’s why I began jokingly calling myself Miracle Girl.

It’s not every atheist who has the privilege of receiving an authentic Miracle of God. You would think he’d hold my long-time atheism against me. After all, this is the god who is so insecure that he needs constant praise. If I were an all-knowing, all-powerful, creator of the universe and lord of all he surveys, I might have developed a bit of a swelled head. But not this holy piece of work.

Sorry you saved my life now, o’ Great Big Genie in the Sky? If you thought nearly killing me might bring me into your cheering section, then your omnipotence needs a check-up. Since my awakening, I’ve embarked on a thriving career writing about secular subjects. (My new Patheos blog being Exhibit A, for atheist.)

Okay, I’ll admit I had several frequently fatal conditions competing with each other over which one would get a chance to kill me. The main culprit was Legionnaire’s disease, which triggered a series of unfortunate events, including the multiple strokes on both sides of my brain that were my version of the poisoned spindle in Sleeping Beauty.

My doctors proclaimed me profoundly brain damaged and advised my loved ones to give up hope for my recovery. I was expected to die. As you may have guessed, they were wrong. Indeed, I experienced absolutely no cognitive damage at all.

But of course my recovery wasn’t a miracle. Unlikely, even astounding, but most certainly not a miracle. If your doctor tells you that you have only a one percent chance of survival, you might want to think about drawing up a will. But one in a hundred patients given your diagnosis will draw the Golden Ticket.

I won the Everlasting Gobstopper of life.

A fundamentalist friend (now ex-friend) once told me, just because my recovery can be explained, that doesn’t mean God wasn’t involved. So God made my doctors give me massive doses of antibiotics, the standard treatment for Legionnaires’ disease? He commanded them to hook me up to a ventilator and perform dialysis, giving my lungs and kidneys time to heal. He also forced me to undergo grueling physical therapy to help me walk again after my awakening.

And if I had died, my believer friends would’ve said that it was God’s will. Theists certainly have their bases covered. Or, they might have thought that God was sending my loved ones a message.

God to loved ones: You’re not groveling enough. C’mon on, pucker up.

Now you know why a Washington Post piece called me, “Funny, frequently profane and adamantly atheistic.” I want that on my tombstone.

It certainly was big of God to overlook my frequent mocking of him. When you look at the bible, he certainly doesn’t seem like the forgiving sort. All Lot’s wife did was look backward and suddenly she was a giant salt shaker. That kind of sounds like what happened to Eurydice when Orpheus was leading her out of Hades, minus the sodium, doesn’t it? Oh, I forgot, that was only mythology.

But you’re talking about the Old Testament, you say. (Okay, not you, but the global you.) God is now a god of love. Maybe he took anger management classes. But I’m of Jewish heritage; my God could beat up the Christian idea of God and take his lunch money too.

While Judaism is the religion I don’t practice, I was raised an agnostic. My instinctive response to religion isn’t anger or bitterness, but to satirize its countless absurdities.

Thus, Miracle Girl will be filled with bountiful irreverence toward religion. But it will also show my reverence for evolution, which I’ve loved since I was a little future paleontologist. And, after all, I ultimately owe my life to the survival mechanisms the human body evolved through natural selection. (Though in my case it was hardly survival of the fittest.)

Praise be to Darwin. (Except for the bits about the races in The Descent of Man. Darwin was a man of his time.)

What else will I write about? Well, the posts I’ve penned for the Secular Spectrum make a pretty good guide. My SecSpec posts have ranged from the evolution of evolution to creationism to politics and the politics of creationism.

My mixed-up, barely Jewishish, nonreligious upbringing has often been a target of my self-mocking. What else can you expect from someone of Jewish ancestry who portrayed both Hitler and Joseph when she was a child?

I will also delve into the science of the covert cognition I experienced during my coma, which I wrote about in my Skeptical Inquirer article, “Covert Cognition: My So-Called Near-Death Experience.”

Even as my doctors were writing me off as a vegetable, I was telling them to leave me alone so I could get back to sleep—in what I call my coma-dream. According to researchers, as many as one in five patients with disorders of consciousness are covertly aware. I’ve been luckier than most because I’m now fully conscious…except in the morning.

In the Skeptical Inquirer article, I also contend that near-death experiences are in fact another form of coma-dream. I didn’t see Heaven because it wasn’t part of my mental landscape, as someone raised without religion. I imagined not angels or demons, but miniature zoo animals holding a tea party. (Instead of attending synagogue as a child, I spent my time watching movies like Attack of the Puppet People.)

In future posts, fellow coma survivor and NDEr Eben Alexander will come in for a drubbing, as will the claims of his heavenly deluded ilk. Proof of Heaven or proof of coma-dream?

In short, Miracle Girl will be a mix of science, skepticism, secularism, satire, and assorted geekery, with a sprinkling of politics, parody, and ill-advised alliteration.

It will be an eclectic mix, but this is my brain on ADHD.

I will, however, avoid excessive navel-gazing, despite the fact that I have two of them. (I now have a second belly button, through which I received nourishment during my prolonged nap.)

And, God, if you’re out there in your mythical realm with Anubis, Mithras, and Babe the Blue Ox, it’s me, Stephanie. Still alive and as atheistic as ever, ready to mock you within an inch of your non-existence.

May 5, 2016
Which Came First, the Science or the Atheism?
Next Post 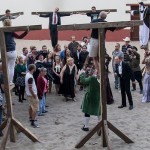 May 23, 2016 So Always Look on the Bright Side of Death...
Recent Comments
0 | Leave a Comment
"The blog was absolutely fantastic! Lot of great information about how Music Therapy get you ..."
Monics Mery Music Therapy: Revealing Awareness and Awakening ..."
"Nixon didn't have the charisma that Trump does. So long as Republicans fear Trump's supporters, ..."
Nemo President Trump: Mimicking Nixon in More ..."
"does feal like that is the main diference between them, can anyone name any other ..."
noah johnson Lex Luthor is fiction, Donald Trump ..."
"Someone told me the internet in general has made people lose their compassion for other ..."
Brianna LaPoint Trolls: Warping the Internet into a ..."
Browse Our Archives
get the latest from
Nonreligious
Sign up for our newsletter
POPULAR AT PATHEOS Nonreligious
1