Slowly Awakening from the Second Awakening

Instead of the most enlightened people, I fear we Americans shall soon have the character of the silliest people under Heaven.*

Those were the words of John Adams regarding the burgeoning fundamentalist movement called the Second Awakening, which began taking root around the turn of the 19th century. I’m mostly recovered after my coma awakening three years ago, thanks to intensive physical therapy. But America is just beginning to enter rehab from its Second Awakening more than 200 years ago.

As I said in the first post in this series, John Adams was as dedicated to separation of Church and State as Jefferson, if less intemperate in his remarks. You have to remember that the Founding Fathers were men of the Enlightenment, whose forefathers came to this country as refugees from religious persecution in a Europe stained red with the blood of religious wars.

The FFs valued reason over revelation. Even the nominally religious among the them, like Adams, would’ve had far more in common with the atheist movement that the Religious Right.

Though Adams entered Harvard at the age of 15 with the intention of entering the ministry, he was soon wooed by secular, Enlightenment scholarship. And as he got older, he drifted farther and farther away from his Calvinist roots. He eventually wandered into the tolerant arms of the Unitarian Church.

This is what John Adams, the second president of the United States, had to say on the subject of religious freedom.

There exists I believe throughout the whole Christian world a law which makes it blasphemy to deny or doubt the divine inspiration of the old and new Testaments from Genesis to Revelations. In most countries of Europe it is punished by burning at the stake, or the rack or the wheel; in England itself it is punished by boring of the tongue with a red hot poker; in America it is not much better…. A law was made in the latter half of the last century repealing the cruel punishments of the former laws but substituting fine and imprisonment upon all those blasphemers upon any book of the old Testament or new. Now what free inquiry when a writer must surely encounter the risk of fine or imprisonment for adducing any argument for investigation into the divine authority of these books?… I think such laws a great embarrassment, great obstructions to the improvement of the human mind. Books that cannot bear examination certainly ought not to be established as divine inspiration by penal law [emphasis mine].

Take that, James Dobson. The Founding Fathers intended to base the United States of America on biblical principles? Really?

Pull the other one.

Here is Part One of this continuing Founding Fathers series. 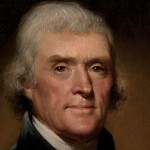 July 1, 2016 A Less-Than-Saintly Patron Saint of Separationism
Recent Comments
0 | Leave a Comment
Browse Our Archives
get the latest from
Nonreligious
Sign up for our newsletter
POPULAR AT PATHEOS Nonreligious
1