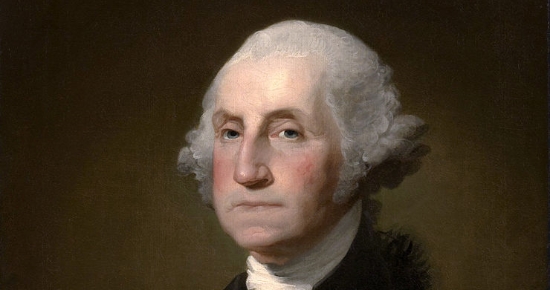 You knew that the “I cannot tell a lie” story about the boyhood George Washington was as false as his teeth (which were of course not made of wood). But Washington was indeed known as a taciturn man of personal rectitude.

What he wasn’t known for was religious piety. In fact, whenever he was pressed on whether we was a devout Episcopalian, “the old fox,” as Thomas Jefferson called him, would cannily skip over the subject. Instead of obfuscating, as a modern politicians would, the Father of our Country made a habit of keeping his mouth as closed as it is in the above portrait.

He left even his friend guessing as to his religious leanings, and he never mentioned Jesus in any of his letters. George would also change references to Christ in congressional declarations of thanksgiving. When he attended church with Martha, he would leave well before communion was taken, forcing the coachman to make two trips. Some of Washington’s actions and remarks suggest that he may have been a deist. At the very least, Washington was far from religious.

Though his closest companions didn’t have a bead on his religious views, even the most evangelical of his brethren had no question about the quality of his character.

But I come not to praise George Washington, but to bury him.

See also: No Breach in the Wall of Separation 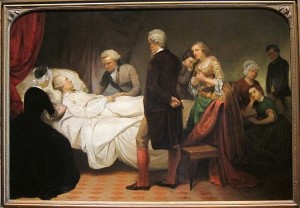 Now, you may find it a strange approach to talk about the death of our first president on the Fourth of July. Shouldn’t I be focusing on what by all accounts was the dignified, upright personality of the Father of our Country? Perhaps his against-all-odds victories over the Red Coats? Or maybe his founding of many of the presidential conventions that live on to this day?

Yes, but perhaps you’re sick of all that patriotic schmalz by now and could use a good laugh.

Of course, Washington’s death wasn’t funny. Far from it. When you learn about the medieval “cures” inflicted on old George, it reads like something Dick Cheney would’ve approved of in Guantanamo Bay. In point of fact, it may well have been the Carrie-level bloodletting that killed the Father of our Country.

But this account of Washington’s death, written by the same “biographer” who invented the cherry tree story, is hilarious. Parson Weems was a biographer who went where even David Barton would fear to tread.

Fearing that the hour of his departure out of this word was at hand, he desired that every body would quit the room. They all went out, and according to his wish, left him–with his God.

There, by himself, like Moses alone on  the top of Pisgah, he seeks the face of God. There by himself, standing as on the awful boundary that divides time from eternity, that separates this world from the next, he cannot quit the long-frequented haunts of the one, nor launch away into the untried region of the other, until (in humble imitation of the world’s great Redeemer) he has poured forth into the bosom of his God those strong sensations which the solemnity of his situation naturally suggested.

…Feeling that the silver chord of life is loosing, and that his spirit is ready to quit her old companion the body, he extends himself on this bed–closes his eyes for the last time with his own hand–folds his arms decently on his breast, then breathing out “Father of mercies! take me to thyself,”–he fell asleep. [What, he didn’t bury himself, as well?]

Swift on angels’ wings the brightening saint ascended; while voices more than human were heard (in Fancy’s ear) warbling through the happy regions, and hymning the great procession toward the gate of heaven. His glorious coming was seen far off, and myriads of mighty angels hastened forth, with golden harps, to welcome the honored stranger. High in front of the shouting hosts, were seen the beauteous forms of FRANKLIN, WARREN, MERCER, SCAMMEL, and of him who fell at Quebec, with all the virtuous patriots, who, on the side of Columbia, toiled or bled for liberty and truth….*

One wonders how this eyewitness account–oh, wait, Washington had ordered everyone from the room–also managed to follow him all the way to Heaven, where he reunited with the deistic Benjamin Franklin. [Kind of reminds me of the scene with the ghosts of Anakin Skywalker (better known as Darth Vader), Obi-Wan Kenobi, and Yoda at the end of Return of the Jedi.]

The death of Washington became a popular subject for tear-jerking paintings in the 19th century. Indeed, his ascension to Heaven is painted on the Capitol rotunda, as if it were the Sistine Chapel.

So much for separation of Church and State. In reality, Washington, who was well aware of his approaching death, made no request for a clergyman to be present. 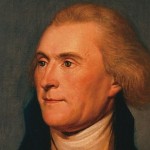 July 2, 2016
No Breach in the Wall of Separation
Next Post 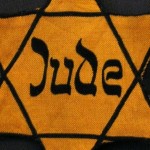 July 6, 2016 Jew or Not a Jew*
Recent Comments
0 | Leave a Comment
"The blog was absolutely fantastic! Lot of great information about how Music Therapy get you ..."
Monics Mery Music Therapy: Revealing Awareness and Awakening ..."
"Nixon didn't have the charisma that Trump does. So long as Republicans fear Trump's supporters, ..."
Nemo President Trump: Mimicking Nixon in More ..."
"does feal like that is the main diference between them, can anyone name any other ..."
noah johnson Lex Luthor is fiction, Donald Trump ..."
"Someone told me the internet in general has made people lose their compassion for other ..."
Brianna LaPoint Trolls: Warping the Internet into a ..."
Browse Our Archives
get the latest from
Nonreligious
Sign up for our newsletter
POPULAR AT PATHEOS Nonreligious
1

'Joseph Masturbated In The Corner, Too'...
Laughing in Disbelief
Related posts from Miracle Girl