Onward Secular Soldier: The Moral Majority and Me

Patheos Explore the world's faith through different perspectives on religion and spirituality! Patheos has the views of the prevalent religions and spiritualities of the world.
Though I’m far from a firebrand atheist, my attitudes towards the Religious Right were radicalized by the Moral Majority in the 80s. The inaccurately monikered Moral Majority was Jerry Falwell and Paul Weyrich’s unholy alliance between the radical fringe of the evangelical movement and the most rabid elements of the ascendant right wing of the Republican party.

For a while, it looked like this match made in Hell would produce a Rosemary’s Child of theocracy in a country founded on the principle of separation of Church and state. Both sides were using each other, of course. While the GOP continues to play the Christian persecution card, the Moral Majority disbanded in 1989.

They declared victory (in the midst of declining donations) and folded up their political revival tent. While a significant portion of the Religious Right hasn’t gotten the memo yet, they’ve already lost the war. Gay marriage is now the law of the land, which is supported by 57% of the American public, with only 35% opposed. Nones are now the second largest religious group. And each successive cohort of Millennials is more secular than the last.

I wish I could’ve given my teenaged self a hug. There, there, it’s going to be okay in a few decades. But that’s not what it felt like in that time of what seemed like the eclipse of secularism. My mom and I actually considered writing a dystopian science fiction novel about about a Christian fundamentalist takeover of the US. (If it had ever been written, I would’ve turned it into a satire.)

All this was happening just as I had begun identifying as an atheist. Admittedly, it was one tiny step for agnostic kind when I realized I had lost that minute sliver of belief in the possibility of God’s existence.

See also: The End of an ERA and the Dawn of a New One.

I suppose my feelings were somewhat akin to what the Religious Right is experiencing regarding the socially leftward drift of the country today. The legacy of the Moral Majority, which I can’t say without implied air quotes, lives on in such organizations as the Family Research Council.

But does the switchover hold a lesson for our now-ascendant cultural liberalism? Yes, of course it does. Nothing stays the same. But knowing that will keep us on our guard. Perhaps not thinking God is on our side will help our case, as well. Godlessness helps those who help themselves instead of “praying on it.”

We have to guard against triumphalism. Still, I can’t help reflecting back on how much has changed, in the wake of the death of anti-feminist and culture warrior Phyllis Schlafly. Am I a terrible person for smiling after typing those words? Though, now that Jerry Falwell is not finding his reward in Heaven, Tinky Winky is the one who had the last giggle.

It’s the forces of Christian theocracy, anti-secularism, and prejudice against the LGBT community that are fighting a rear-guard action now. And that’s the way I like it. 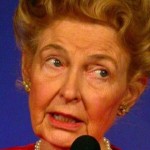 September 9, 2016 5 Reasons Why I Needed a No Soliciting Sign for Hospital Clergy
Recent Comments
0 | Leave a Comment
Browse Our Archives
get the latest from
Nonreligious
Sign up for our newsletter
POPULAR AT PATHEOS Nonreligious
1