Adult ADHD: Curing Chronic Brain Farts…and the Stinks They Cause

I need a psychiatrist. No, really. My severe attention deficit disorder has gone untreated ever since my coma and it’s driving me crazy. Well, not crazy, but I’ve recently had a growing realization that my attempts to compensate for my unmedicated, adult ADHD have been woefully inadequate.

You wouldn’t think being a blogger would be that stressful. But the pressure to keep up my writing quality while writing two posts a week — with all my physical problems and frequent doctor’s appointment interruptions — feels intense, at least to me.  And that’s coupled by the difficulty I so often have to even get my overloaded synapses to connect properly.

To me, life is a series of slippery strands that keep sliding through my fingers. I can’t grasp firmly enough to hold onto the strand for long. Just when I think I finally have a grip on it, another strand comes along. Oops, there goes the other one! I can’t keep a phone number in my head long enough to dial it. The first digit pushes out the next.

Okay, so keep a to-do list. Jot notes and phone numbers down on your phone. Ah, but inconsistency and poor organizational skills is a hallmark of ADHD. Just take a look at the “adult” ADHD poster child in the Oval Office.

See also: Hyperactive-in-Chief: This is the Presidency on ADHD

ADHD brains don’t set up hierarchies like most unaffected brains instinctively do. That’s especially a problem for those with adult ADHD because the modern world is so confoundedly complex. It’s built for people with brains that can automatically prioritize a gazillion different agenda items, names, dates, and appointments that must be filed mentally in order of relevance and urgency.

For those with adult ADHD, everything comes at you at once.  Your brain dumps this jumble into one disorganized bundle, like an overstuffed and cluttered bucket purse. Along with important items like your wallet and keys, it’s also crammed with used Kleenexes, random coins, and ancient ticket stubs.

Where is that important phone number I jotted down on an old receipt?

The only reason I’m even partially functional is, well, I’m fairly intelligent and I have a natural facility with words. Yet, I often feel as dumb as a post. I have countless self-deprecating jokes at the ready to laugh away my brainlessness. It’s a good thing brain farts don’t stink like the real kind.

Actually, brain farts do stink, just not in that way.

So why have I been muddling through my frustrating symptoms, despite the fact that I’ve known that I suffer from severe ADHD since I was first diagnosed in early childhood? Actually, I used to be on long-acting Ritalin. My first bout of Legionnaires’ disease — the one that caused my coma — changed that.

Initially, my blood pressure, and especially my heart rate, was high after the coma. This was despite the fact my BP has tended to be slightly low my entire life.

When I was in the hospital for my second bout of Legionnaires’ disease — damn you, prednisone! — Keith and I got into a heated argument with an arrogant doctor who tried to convince us that my soaring heart rate was caused by an anxiety disorder. He wanted to put me on powerful anti-anxiety drugs we knew I didn’t require.

Now, I do suffer from moderate, free-floating anxiety as a side effect of my adult ADHD, but it’s transitory and far from a crippling. Yet my heart rate had nothing to do with that. As I tried to explain to him, I wasn’t even feeling anxious during naturally stressful hospital stay.

To his credit, the doctor later went back and checked my medical records. He discovered that I had been put on powerful heart medications during my coma, when I suffering from multiple failing organs. Undoubtedly, I needed the meds at the time.

The medications were at a level usually prescribed for heart failure patients. What my doctors didn’t know was I have a history of a paradoxical reaction to heart medications. (I was with a different medical group at the time.)

That time the RX was intended to help prevent my chronic severe migraines. Instead, it sent my blood pressure through the roof. After the prescription was discontinued, my BP returned to its usual level.

Fast forward to 2014. After my heart medications were titrated off, my blood pressure returned to slightly below normal. My heart rate is now in a healthy range…at least until WordPress or the Patheos gateway becomes ferkakte, as it did the other day as I struggled to publish my tardy post.

I simply don’t react to such frustration as calmly when I did when I was on Ritalin. That affects my close relationships and my own peace of mind. In fact, if that hospital doctor had seen me during this episode, he would’ve been scribbling that script for anti-anxiety meds.

Or calling the men in white jackets.

Before my coma, when I finally decided to start treating my adult ADHD, I found my writing time became much more productive. Too bad I hadn’t yet developed good writing habits, as well.

That’s what writing for Patheos has done for me. I now write far more quickly than I once did. But even more importantly, I’ve developed consistent writing habits for the first time in my life.

I never wrote every day until I started blogging for Patheos. Yet, I’m now consistent in something else…distraction. Writers are often advised to disconnect from the internet while writing because web distractions is a problem for every writer, whether they suffer from adult ADHD or not.

But I’m. Writing. On. The. Internet. While I could compose my posts offline, I so frequently need to research things as I write that I simply can’t take myself offline.

The real problem, however, has nothing to do with zipping over to the news headlines or my Facebook timeline. Even during the writing of this post, I’ve stopped everything to do something I forgot to do or simply on a passing whim innumerable times.

Medication would help to keep my attention from wandering as I write. And I would get to writing earlier as my morning distractions become quieted.

All right, so what kept you from getting around to making an appointment to see a psychiatrist after your BP stabilized, then? Well, Medi-Cal stopped covering psychiatry appointments during the Great Recession. It’s covered again, but by then I needed to find a psychiatrist near our home in the San Fernando Valley.

Did I mention that procrastination is a signature ADHD symptom?

Besides, I take so many other medications. Why take yet another one? And until recently, I thought I was adapting well without the Ritalin.

When I was growing up, I was always told that I would eventually outgrow my ADHD. Not so much. It’s now known that the majority of children with ADHD continue to suffer from it their entire lives. The confusion was due to the fact that most adults develop strategies to cope with their symptoms. These are effective to varying degrees, masking their continuing mental and emotional deficits.

The most efficacious way to deal with adult ADHD, however, is a multi-pronged approach. With the help of medication, advice from a professional, and their own strategies to combat their symptoms, people are far more likely to be successful.

As I set up my appointment Friday morning, I seemed determined to demonstrate my adult ADHD even as I was describing my symptoms. I was feeling especially antsy, so I kept losing strands of conversation or talking over the nurse. (I’ve worked especially hard to train myself not to talk over people. Normally.)

And then I had to call back to reschedule.

Part of my brain registered that the office was in Reseda — not in the same Panorama City hospital complex as my other specialists. But it wasn’t communicating with the part that was thinking that it would be convenient to schedule the appointment on the same day as I have other appointments…in Panorama City.

That was merely annoying, but distraction contributed to the falls that broke my shoulder and my foot. Experience shows that such doh! moments will be less frequent and severe, but won’t disappear once I’m back on treatment.

While my brain farts will still be silent, they’ll be far less (potentially) deadly.

If you like my writing, please consider supporting my work on Patreon. For only $1 a month, you can follow my recovery while you enjoy wildlife, nature, and garden photos, gifs, and panoramas, as well as other exclusive content. A pledge of $5 brings you the pre-publication versions of my Free Inquiry essays. Click the Patreon button for more rewards: 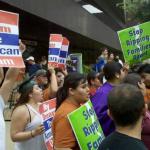 September 7, 2017
DACA Dreamers: Raised in America, Its Promise Yanked Away
Next Post 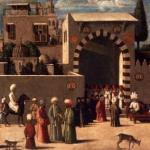 September 13, 2017 Religious Curiosity: What Draws the Faithful Into the Fold?
Recent Comments
0 | Leave a Comment
Browse Our Archives
get the latest from
Nonreligious
Sign up for our newsletter
POPULAR AT PATHEOS Nonreligious
1

Why the Gospel Doesn't Work on...
Godless in Dixie
Related posts from Miracle Girl