Pre-existing Conditions: When the Foxes Own the Healthcare Coop

Pre-existing Conditions: When the Foxes Own the Healthcare Coop September 28, 2017 Stephanie Savage

Trumpcare is dead…again. But it’s too soon to celebrate. Well, okay, you can pour a glass of champagne, but don’t drain the bottle just yet. You may eventually need it to drown your sorrows. Medicaid and the healthcare of millions with pre-existing conditions will never be completely safe while Republicans hold all branches of power.

Admittedly, the GOP so far hasn’t demonstrated an ability to govern. Fortunately. The Party of No™ apparently doesn’t know how to say yes. Yet that doesn’t mean that Obamacare is safe and secure.

The foxes still own the healthcare hen house, after all.

The predator-in-chief certainly hasn’t given up his quest to devour his predecessor’s legacy and the protections they afford. This is what President Trump tweeted the day after Graham-Cassidy went down in flames:

We will have the votes for Healthcare but not for the reconciliation deadline of Friday, after which we need 60. Get rid of Filibuster Rule!

Um, Donald, have you noticed that you haven’t even been able to get to 50?

Yes, that Roy Moore, who was suspended twice from the Alabama Supreme Court over defying federal orders to remove a Ten Commandments display and for instructing judges to defy the Oberfell decision legalizing gay marriage.

You know, the decision handed down by the Supreme Court of the land. But then, Moore thinks the Constitution was drafted to foster Christianity.

Though Mitch McConnell is frequently likened to a turtle — a way too cuddly image for me — he’s the same carnivorous partisan who slaughtered President Obama’s moderate and eminently qualified choice for the Supreme Court, paving the way for arch-conservative Neil Gorsuch. The Senate majority leader has expressed a desire to eventually repeal the Affordable Care Act…after he’s finished doling out candy to the ultra rich in the guise of tax reform.

Yet, a new revivification of Trumpcare would require another budget reconciliation bill giving the GOP’s slim majority a chance to pass an Obamacare repeal bill with only a bare majority of 50, plus a tie-breaking vote by Vice President Pence. Not that he ever managed it with the previous Trumpcare versions.

McConnell reminds me of Kevin Costner in the movie Tin Cup, taking shot after shot after shot in a big golf tournament…and failing every time. Though Mitch is far from a lovable loser. Loser, yes, lovable, not so much.

The biggest problem with this scenario is that this budget resolution would be for the 2019 budget, putting the debates smack dab into the 2018 midterm election season. Still, the majority leader might well calculate that the GOP caucus needs another swipe at Obamacare to bolster his minions with the rabid base.

Pre-existing Conditions: Happiness, Liberty and the Pursuit of Life

The fact remains that people with pre-existing conditions and those on Medicaid will never be able to rest easy while the GOP owns the farm. I of course fit into both categories.

When I was being repeatedly turned away from health insurance coverage, I never thought that healthcare for people like me would eventually be saved because the nation had finally decided that people with pre-existing conditions had a basic right to healthcare. We have Barack Obama to thank for that.

It’s a truism that once a benefit is given to the American people it’s difficult to take back. That doesn’t only go to coverage for pre-existing conditions, but also for Medicaid.

Every iteration of Trumpcare included an assault on Medicaid. This was no coincidence. The GOP smelled blood and gathered for the kill of a long-despised healthcare program that covers nearly a fourth of all Americans. Medicaid pays for 49% of births — hows that for “pro-life? — and 64% of nursing home care.

That’s right, they wanted to metaphorically throw babies and grannies under the bus.

It’s a delicious irony that the GOP might well have succeeded in repealing Obamacare if they had stuck to its least popular elements and kept their hands off Medicaid, imperiling protections against pricing people with pre-existing conditions out of the insurance market for good measure.

That old, literally dyspeptic — did you ever watch him during a State of the Union address? — political hand John Boehner predicted that President Trump would fiddle around the edges of Obamacare, slap his name on it, and declare victory. If The Donald had followed that course he would be claiming he killed Obamacare, and the millionaire rebate plan just getting started would’ve already been concluded by now.

That’s the good news. But the likely election of Roy Moore to the hallowed halls of the US Senate is darkening the horizon. Sorry, I didn’t mean to give you any nightmares. And, John McCain, sadly, will almost certainly lose his battle with an aggressive and nearly always fatal brain cancer, leaving his seat to a more compliant neophyte.

On the bright side, this highly respected war hero is far from the only Republican committed to preserving “regular order” and bipartisan negotiations. Lamar Alexander, chairman of the Health, Education, Labor, and Pensions committee (HELP) and the committee’s ranking Democrat, Patty Murray were closing in on an agreement to stabilize ACA marketplaces and provide guaranteed funding for the cost-saving reductions (CSRs) for lower income people vital to their survival.

Alexander dutifully suspended the negotiations to allow Graham-Cassidy to present a binary choice to wavering senators. As a former governor of Tennessee, he and Murray are doing their best to prove HELP an appropriate acronym by resuming talks immediately now that Graham-Cassidy is a-moldering in its grave.

Unfortunately, the deadline for marketplace insurers to file their 2018 rates just passed in most states. The negotiations were intended to alleviate the uncertainty among participating insurance companies, which has already caused Blue Cross Blue Shield of North Carolina to jack up it’s premiums 22.9% in response to lack of guaranteed CSRs, which the Trump administration has repeatedly threatened to kill.

See also: Pottery Barn Rule: You Break the Healthcare System, You Bought It

And that leads us to the last, but certainly not least, threat to the ACA. Let us remember that the man in charge of administering Obamacare, is a viper in the grass dedicated to its demise since he was in congress. Tom Price controlling Obamacare is like the witch from Hansel and Gretel running a daycare center. Indeed, funding for ACA outreach was slashed from $100 million to $10 million as the Obamacare marketplaces were gearing up for enrollment season.

You read that right.

Meanwhile, Tom Price has been flying on private charter flights at the public’s expense. I guess the price was right for him.

I’m sure the HHS director sees no hypocrisy in tapping into public funds to chat with his son while seeking to deny people what is now — finally — starting to be considered a human right in America. In every other developed nation, providing healthcare has long been considered a public duty.

Only in America have the very people who need healthcare the most been denied access to it. That’s the way it used to be before Obamacare. And it’s the world the people who currently govern the country would like to return.

Lower income people and those with pre-existing conditions are surrounded on all sides by ideologues who would restrict or eliminate their healthcare. The predators are poised to sink in their fangs, waiting for their chance to strike.

Dance on the grave of Graham-Cassidy to your heart’s content. But it’s too soon to let down your guard. 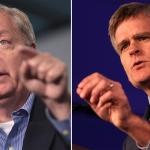 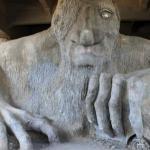 September 29, 2017 Trolls: Warping the Internet into a Sadist's Playground
Recent Comments
0 | Leave a Comment
"The blog was absolutely fantastic! Lot of great information about how Music Therapy get you ..."
Monics Mery Music Therapy: Revealing Awareness and Awakening ..."
"Nixon didn't have the charisma that Trump does. So long as Republicans fear Trump's supporters, ..."
Nemo President Trump: Mimicking Nixon in More ..."
"does feal like that is the main diference between them, can anyone name any other ..."
noah johnson Lex Luthor is fiction, Donald Trump ..."
"Someone told me the internet in general has made people lose their compassion for other ..."
Brianna LaPoint Trolls: Warping the Internet into a ..."
Browse Our Archives
get the latest from
Nonreligious
Sign up for our newsletter
POPULAR AT PATHEOS Nonreligious
1