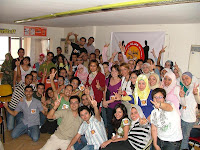 The Los Angeles Times recently did a profile of a group (pictured to the left) in Egypt that is taking a different approach to sexual harassment. The volunteer group is sponsored by the Egyptian youth magazine Kelmetna. One of the great aspects of this group is the focus on men’s role in stopping sexual harassment. The slogan of the group’s campaign is “Respect yourself: Egypt still has real men.” I love this slogan for two reasons. The first is that it challenges one of the core values of traditional notions of masculinity: sexual power over women. Harassing women is not a sign of masculinity; it’s a sign of cowardice. It’s great that Muslims are beginning to recognize this.

The focus on making men responsible also challenges the view that women’s dress will prevent sexual harassment. The Los Angeles Times article cited a survey of Egyptian women which showed that 83% of Egyptian women reported being verbally and sexually harassed. Of these women, 70% were veiled. Nour Hussein, a volunteer with the group who wears hijab, was pushed to join the group after being sexually harassed. About her experience, Nour said “That was a month ago. I felt very insecure and this pushed me hard to join the campaign. I used to hear about harassment but thought that it only happened to non-veiled girls; I never thought it could happen to me.” Stories like Nour’s only further validate that message of the campaign: harassment is not the fault of women; it is the fault of the man. Recognizing that is the first step in taking down sexual harassment.

August 14, 2008 Muslimahs at the Beijing Olympics
Browse Our Archives
get the latest from
Muslim
Sign up for our newsletter
POPULAR AT PATHEOS Muslim
1